‘Without trust, there’s no partnership’: Civil affairs soldiers strengthen US ties to Djibouti 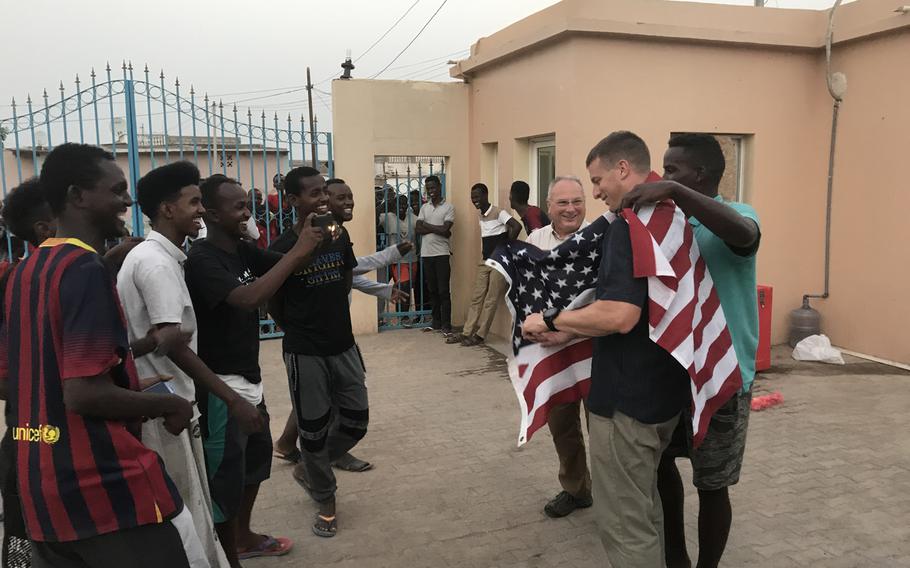 Djiboutian Doudou Roblah drapes a flag over U.S. Army Capt. Noah Hodges' shoulders as Capt. Mike Volk and Roblah's friends look on outside a vocational school in the capital of Djibouti on Thursday, June 13, 2019. U.S. Embassy officials say an English language discussion group the soldiers lead at the school helps to support diplomatic and development efforts in Africa. (Chad Garland/Stars and Stripes)

Djiboutian Doudou Roblah drapes a flag over U.S. Army Capt. Noah Hodges' shoulders as Capt. Mike Volk and Roblah's friends look on outside a vocational school in the capital of Djibouti on Thursday, June 13, 2019. U.S. Embassy officials say an English language discussion group the soldiers lead at the school helps to support diplomatic and development efforts in Africa. (Chad Garland/Stars and Stripes) 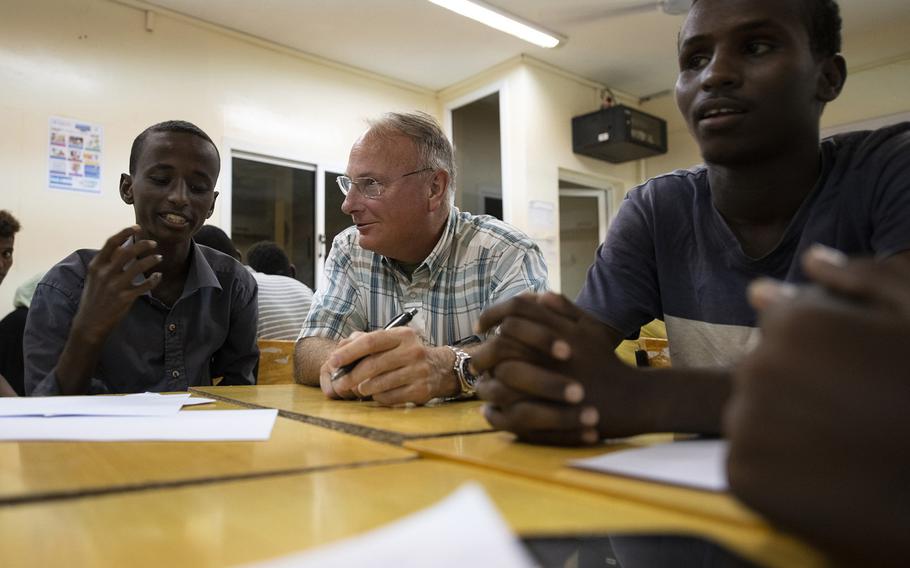 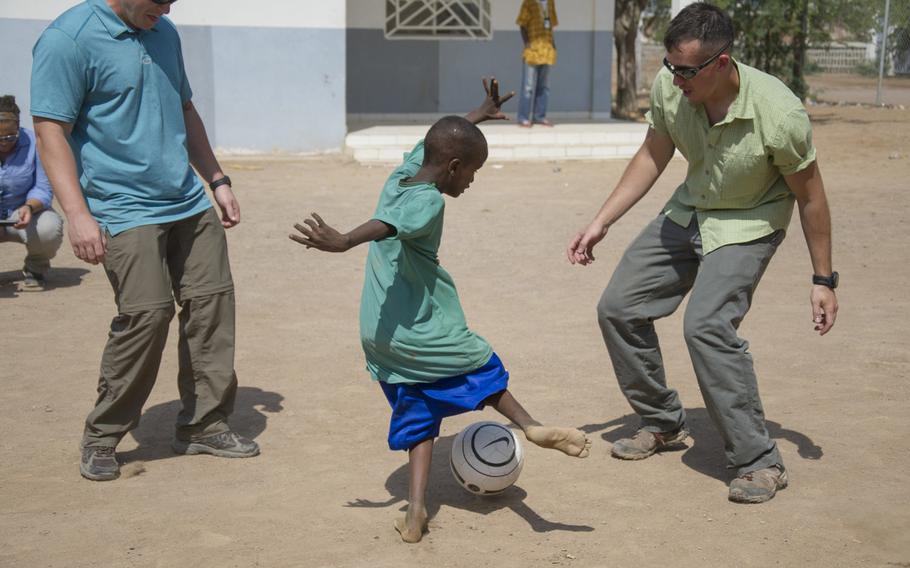 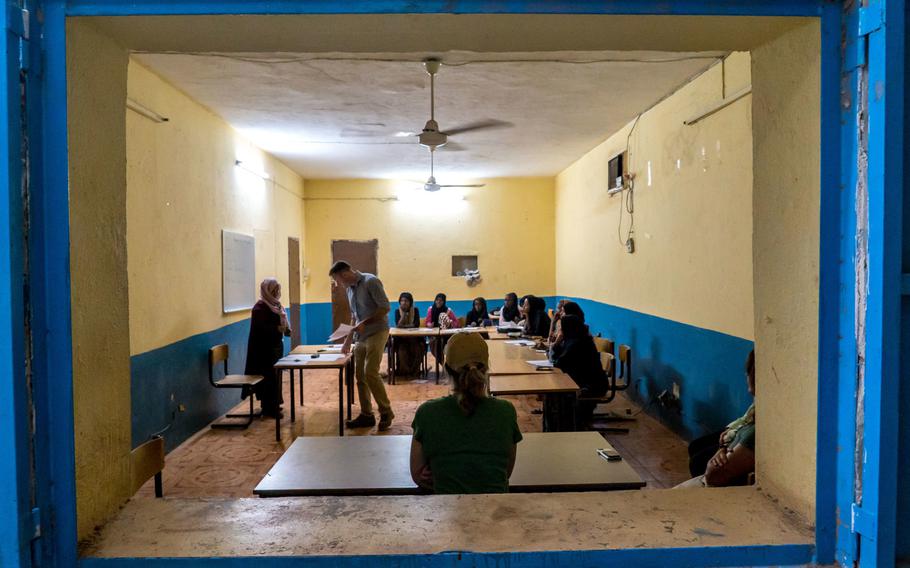 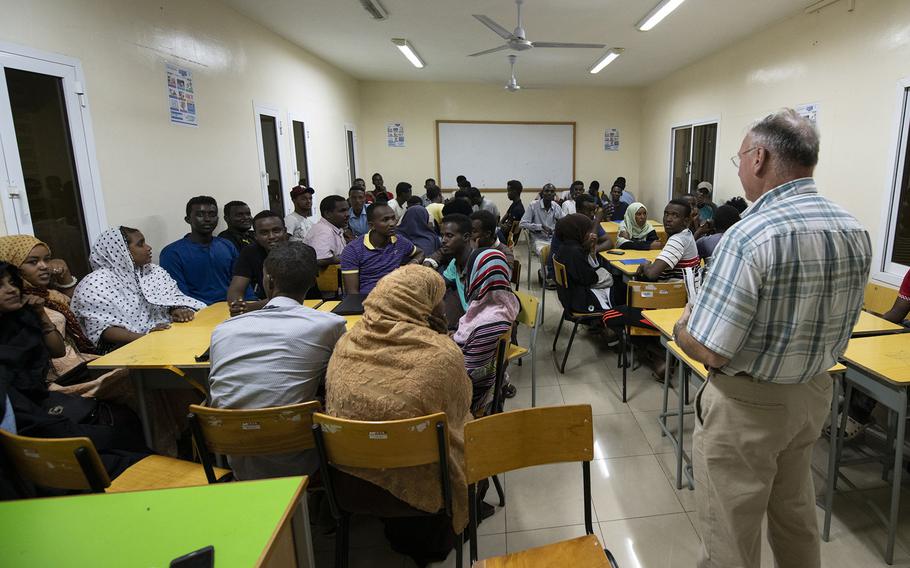 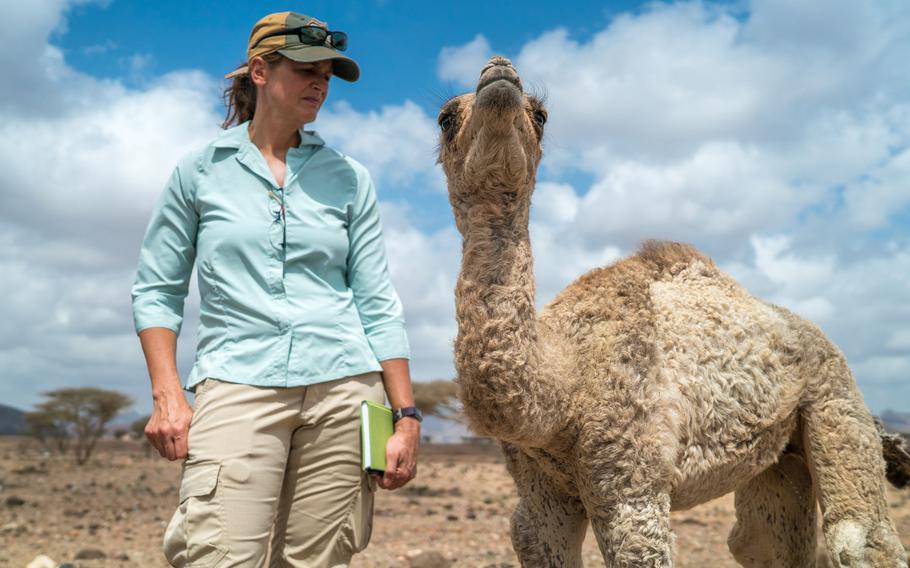 But deployed to this small country in the Horn of Africa, civil affairs soldiers serve as cultural and governance experts who form a key part of the U.S. mission here, as it competes with other world powers making inroads in East Africa.

These servicemembers may be called upon to advise a local government on a public works project, or do something as simple as organize a neighborhood sports outing.

“The joke in civil affairs is we hug people and hand out soccer balls,” said Maj. Christian Booth, operations officer with the Syracuse, N.Y.-based 403rd Civil Affairs Battalion, which ended a nine-month deployment to Djibouti earlier this month.

But Booth, like others in civil affairs, said they assist the U.S. mission by helping to build trust in Americans.

“Without trust, you won’t have collaboration and partnership,” Booth said.

Their efforts align with U.S. Africa Command’s goal of being a “partner of choice” in the region, where its focus is shifting from battling extremists to competing with China, Russia and others for the influence and access necessary to advance U.S. goals, protect American lives and property, and promote greater security.

“The long-term solution has to do with diplomacy and development,” he said in an interview at Camp Lemonnier, the only permanent U.S. base in Africa, home to Combined Joint Task Force-Horn of Africa and just four miles from a new Chinese navy base. “This is going to be the center hub of a lot of activity, both economic [and] political and perhaps even militarily.”

The 4,500 Americans at the base are poised to respond to security crises, but provide more than combat power. For example, he said, airlift has aided humanitarian emergencies across Africa, which is about three times the size of the continental United States.

“People are very, very hungry for English,” said Embassy spokeswoman Jennifer Banuls, who said many embassies would like to offer similar programs, but lack the staff to do so. “It’s great public diplomacy ... The only reason we can do this is because of Camp Lemonnier.”

On a Thursday evening in June, Capt. Mike Volk, who’s a lawyer back home in rural Pennsylvania, and a handful of other soldiers traveled to a vocational high school in the Djiboutian capital’s Balbala neighborhood to lead a discussion group.

It had been weeks since they’d last visited the school, and it would be one of Volk’s last visits before he handed off duties to a new batch of civil affairs soldiers.

As their small convoy of trucks reached the school, a crowd rushed to greet them. One young man, charged with after-school security, displayed an American flag before opening the gates for the vehicles to enter.

“God bless America,” said Doudou Roblah, the flagbearer, who was going to take part in the language lab – but only after he’d posed for photos alongside the soldiers, draping the flag over his shoulders and theirs.

“I see many familiar faces,” Volk said, scanning the classroom filled with at least 20 people. The large group split into several smaller ones, and Djiboutians and Americans began discussing the topic of the evening: life goals.

‘I’m going to miss this’ The conversations reflected that the English discussions and other means of soft diplomacy appear to be having an effect in Djibouti. One young man said he wanted to be a World Wrestling Entertainment star. Another was studying accounting at a local university, but said he might like to write for WWE, prompting a brief, passionate discussion about the reality of professional wrestling. The consensus: The shows are scripted, but the sweat is real.

A 23-year-old woman named Aisha had her sights on becoming a psychologist, a rare profession in Djibouti, she said. Roblah said his goal was to become a U.S. citizen. And Mourad Abdulrahman, a man in his 20s who has been coming to the group for months, had two goals: stay happy and surpass Jeff Bezos in wealth.

“I’m going to miss this,” Volk said later, on the drive back to base. Regulars like Aisha, who was about his daughter’s age, had become like family, he said.

Their work often focuses on improving locals’ access to basic needs such as water, sanitation, health or education, and helps to shore up civil institutions by addressing their vulnerabilities, said Booth, the operations officer at the U.S. base. All of those require engaging with the community.

A measure of their effectiveness is the phone calls they get, asking them to return somewhere, or inviting them to a special event in the community or to launch a new project, Booth said.

After the English discussion last month, for instance, Roblah, the young man with the American flag, asked Volk’s replacement, Capt. Noah Hodges, if his soldiers could come back and transform a dusty lot beside the school into a soccer pitch.

Hodges would have to check into it, he said. But pending the official go-ahead, he offered the young man a consolation: “We can definitely play soccer with you.”