With troops in Iraq, holiday traditions keep spirits high on bases in Germany 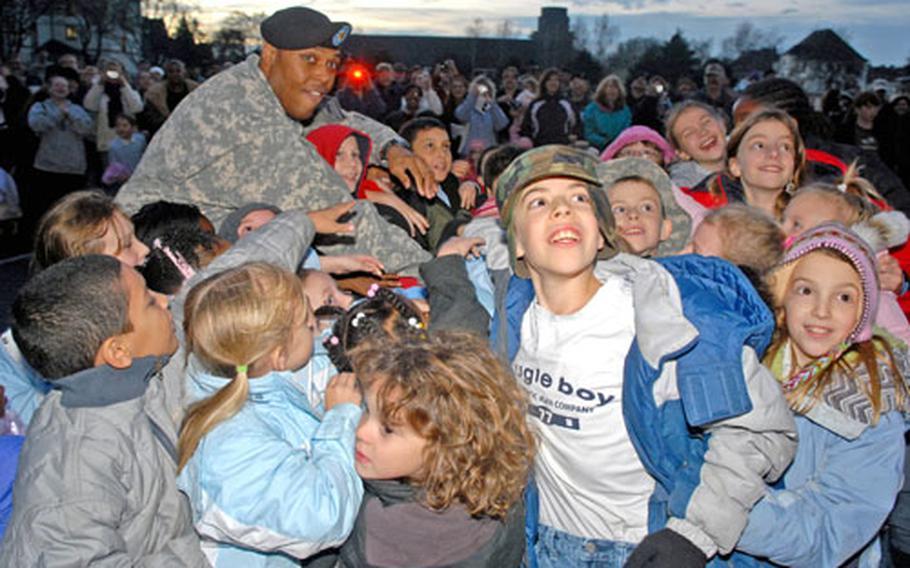 Children of the Friedberg, Germany, community help rear detachment commander Maj. Tony Perry flip the switch to light the community Christmas tree in front of 1st Brigade headquarters on Ray Barracks earlier this month. Many of the children have a parent deployed to Iraq. (Michael Abrams / S&S)

Children of the Friedberg, Germany, community help rear detachment commander Maj. Tony Perry flip the switch to light the community Christmas tree in front of 1st Brigade headquarters on Ray Barracks earlier this month. Many of the children have a parent deployed to Iraq. (Michael Abrams / S&S) 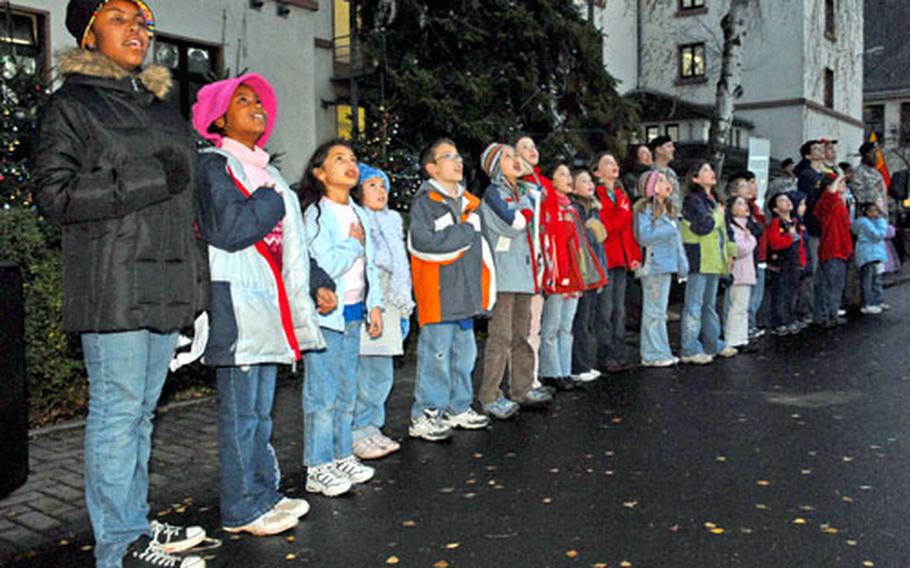 Scouts from the Friedberg, Germany, community recite the Pledge of Allegiance outside 1st Brigade headquarters on Ray Barracks, before the lighting of the community Christmas tree. A moment of silence for the fallen was also observed. The trees behind the children are decorated with bulbs with the names of the fallen and every 1st Brigade soldier deployed to Iraq. (Michael Abrams / S&S)

GIESSEN, Germany &#8212; The day they lit the Christmas tree in Giessen, three 1st Brigade soldiers died in combat in Iraq.

As joyous as this season is supposed to be, pretty bows still come with knots. It&#8217;s an awkward situation for soldiers and military spouses back on the home front, embracing the holidays while friends and loved ones are in harm&#8217;s way.

People are &#8220;pulling together and supporting each other,&#8221; said Capt. David Dake, the rear detachment commander for the 16th Engineer Battalion in Giessen. &#8220;It&#8217;s a difficult time, especially with the holidays, but I think everyone is doing well, all things considered.&#8221;

Dake&#8217;s battalion is in the process of organizing another memorial service. The unit lost its fourth soldier Dec. 1 when Staff Sgt. Robert L. Love Jr. was killed by a roadside bomb in Ramadi, Iraq.

That day will come, though later than originally planned. In September, the 1st Brigade&#8217;s tour was extended by 46 days, meaning troops are now due to return in late February or early March instead of next month.

At the Dec. 5 tree-lighting ceremony in Friedberg &#8212; held the day before Giessen illuminated its tree &#8212; the brigade&#8217;s rear detachment commander asked those in attendance to hold hands as part of a silent &#8220;tribute to our fallen comrades.&#8221; Songs were sung and prayers were said before dozens of children joined Maj. Tony Perry in throwing the switch to light the community Christmas tree. The two Christmas tree-lighting ceremonies were the last in either community, as both are scheduled to close next year.

Not long after the lighting in Friedberg, Santa Claus pulled up in a red fire truck. The children greeted him warmly and soon the bearded fellow was leading a gaggle of kids to a community center for a private chat.

Brown and other moms say one of the challenges this holiday season is keeping their children&#8217;s spirits up despite the absence of dad. Between all the school and community activities, &#8220;the kids are doing pretty well,&#8221; she said.

Maj. Brandon Anderson, the rear detachment commander for 2-3 Artillery in Giessen, credited military spouses with keeping their families and communities going despite the hardships at home.

As Anderson spoke, the sergeant who serves as a family liaison was preparing to escort Pomante&#8217;s remains back to the United States for burial. The holidays may be upon them, but the war effort takes priority.

&#8220;I just try to keep the families well-informed and make sure their needs are being met,&#8221; said Sgt. Charles Sutton.