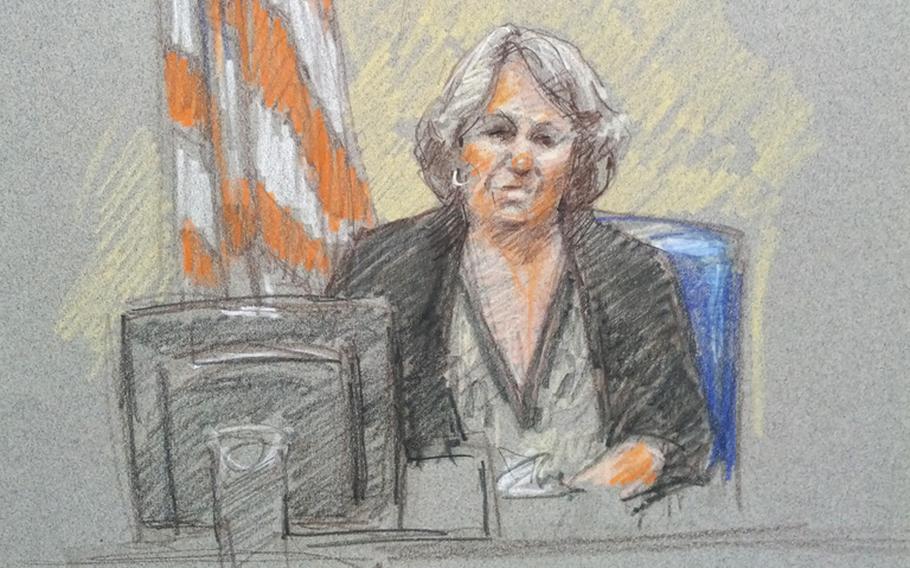 Jerri Krueger, the mother of Sgt. Amy Kreuger, testifies Aug. 27, 2013, as the prosecution wrapped up its case during the sentencing phase in the murder trial of Maj. Nidal Malik Hasan. Sgt. Krueger was killed in the Nov. 5, 2009, shooting attack at Fort Hood, Texas. (Courtroom sketch by Brigitte Woosley)

Jerri Krueger, the mother of Sgt. Amy Kreuger, testifies Aug. 27, 2013, as the prosecution wrapped up its case during the sentencing phase in the murder trial of Maj. Nidal Malik Hasan. Sgt. Krueger was killed in the Nov. 5, 2009, shooting attack at Fort Hood, Texas. (Courtroom sketch by Brigitte Woosley) 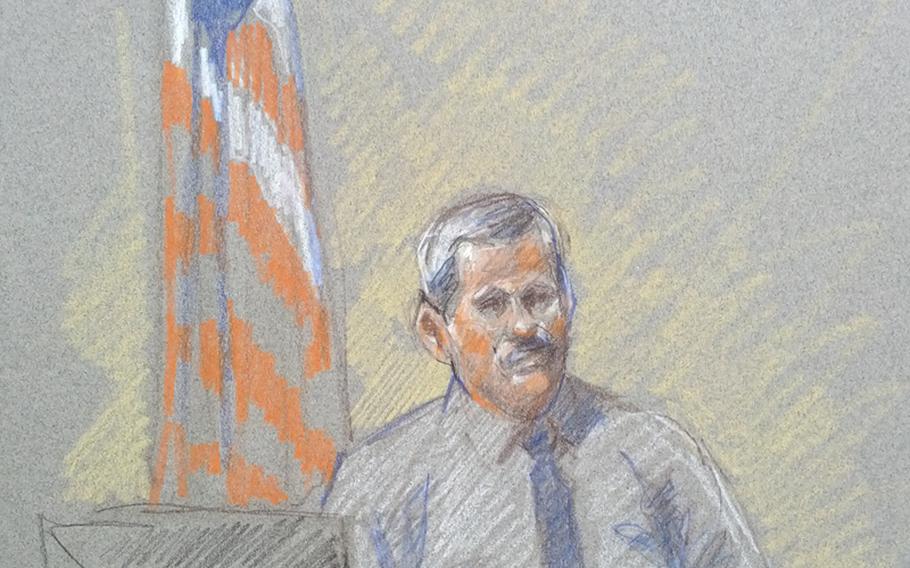 Lt. Col. Randy Royer, shot twice in the Nov. 5, 2009, Fort Hood massacre, testified Aug. 27, 2013, as the prosecution wrapped up its case during the sentencing phase in the murder trial of Maj. Nidal Malik Hasan. (Courtroom sketch by Brigitte Woosley) Philip Warman, widower of Lt. Col. Juanita Warman, testified Aug. 27, 2013, about the Nov. 5, 2009, Fort Hood shooting as the prosecution wrapped up its case during the sentencing phase in the murder trial of Maj. Nidal Malik Hasan. (Courtroom sketch by Brigitte Woosley)

FORT HOOD, Texas — Maj. Nidal Malik Hasan closed his case with three words Tuesday, declining to speak on his own behalf or call any witnesses.

"The defense rests," he said.

On Wednesday, a jury of 13 military officers will begin deliberating on whether to sentence the convicted murderer to life in prison or death by lethal injection.

The prosecution called 19 witnesses and read the testimony of one more, with each explaining how the death of their loved ones or the injuries they suffered that day altered their lives.

The jury will take that testimony into consideration as they decide Hasan’s sentence.

On Tuesday morning, in a session without the jury present, judge Col. Tara Osborn said Hasan’s standby defense counsel had informed her that Hasan had some “personal hygiene issues” to attend to, so she had decided to delay the proceedings. She later told the jury that she was responsible for the early recess.

The second day of the sentencing phase was, like the first, filled with raw emotion; some family members grabbed tissues from a box on the witness stand before they even began speaking.

Lt. Col. Randy Royer used a cane to walk through the courtroom. Royer was one of more than 40 soldiers sitting in folding chairs in the waiting area that Hasan was facing when he yelled, “God is greatest” in Arabic and opened fire, according to witnesses.

Royer said he was shot twice on Nov. 5, 2009, but he said he didn’t have any surgeries until the next day, because the hospitals were full of the wounded.

Royer had worked at a Michelin plant in Alabama, fixing the machines, and had hoped to join active-duty after his deployment, he said. Now, he has constant pain in his leg and can’t rotate his left arm.

He was medically retired from the military, but the Michelin plant found a new job for him, Royer said. Still, he struggles with post-traumatic stress disorder and anxiety, especially in large groups of people, he said.

“One of the worst times is when I have to go to the pharmacy. They have all the chairs lined up in there, and … I don’t do well,” he said.

Jerri Krueger told the jury that on Sept. 11, 2001, her daughter, Amy, came home and said she was joining the Army.

Staff Sgt. Amy Krueger was preparing for her second to deployment to Afghanistan and had recently gotten a tattoo on her back to show her love of the military and other soldiers when she was shot and killed by Hasan.

Her mother remembered hearing “the lightest tap” on her door at 2 in the morning, and argued with herself before going downstairs to let the two uniformed soldiers into the house.

“When a parent loses a child, it creates an irreparable, irreplaceable void,” Krueger testified. “It’s like there is a part of you missing. I live with that every day.”

Joleen Cahill met her husband, Michael Cahill, in 1968, she testified.

He had suffered a heart attack in mid-October and went back to work at the medical Soldier Readiness Processing center early because he wanted to be helping soldiers, Cahill said.

Cahill was so upset when she learned that her husband was dead that she had to be hospitalized for an asthma attack. Her family fell apart after the shootings, she said, because her husband had been the glue holding them together.

Later, Cahill was driving to a counseling session when she said she realized she need to “start fighting back,” to not let the attack ruin her life, or that of her children.

“He is not going to win. I am in control,” Cahill said.

Philip Warman had to stop several times during his testimony, struggling to catch his breath and hold back tears as he talked about his wife, Lt. Col. Juanita Warman.

The day of the attack, Warman said he heard about the shooting but wasn’t sure his wife had even arrived at Fort Hood yet. As the hours went by without a phone call, though, he became increasingly anxious, he said.

As he watched the news, he told himself that his wife, a nurse, was likely helping treat the wounded. Then, at 9 p.m., two officers in dress uniforms rang his doorbell.

“It was like I had something ripped out of me,” Warman testified Tuesday. “I started drinking. And I pretty much drank until the following June.”

Finally, Warman said, he checked himself into a rehab facility for 28 days. He hasn’t had a drink since, he said, and he has taken all of the coins he’s earned from Alcoholics Anonymous to Arlington National Cemetery and pushes each into the dirt at his wife’s grave.