With their wives — not them — reporting for duty, military husbands work to find their place 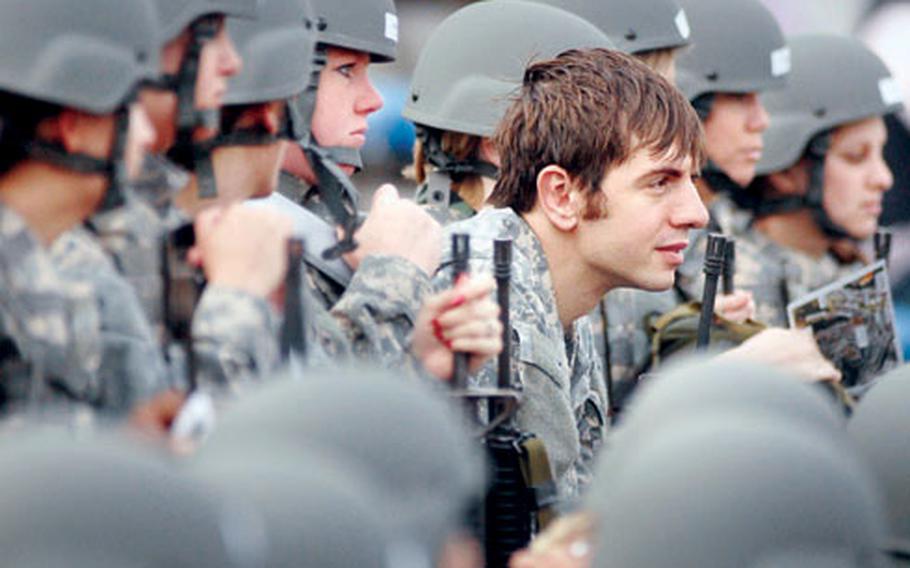 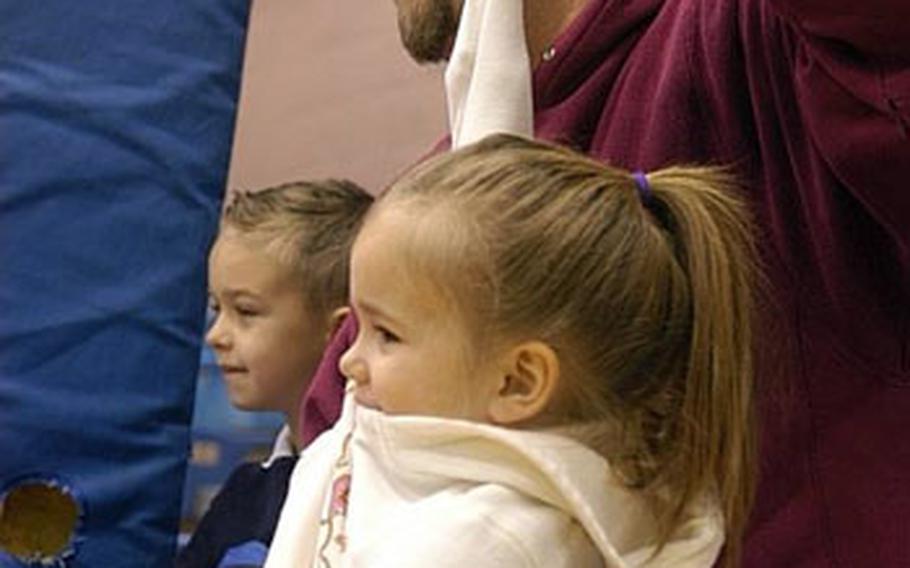 Brett Hennagir struggles to get his daughter Autumn’s sweatshirt off before a gymnastics class near RAF Mildenhall, England, in February. (Geoff Ziezulewicz/S&S) Corey Ringer, and 2nd Lt. Marquise Blakeslee-Ringer last autumn. Ringer, an education counselor at Camp Humphreys, South Korea, says he has had little difficulty as a military spouse. However, he notes that some people still presume that “spouse” means “woman.” (Courtesy of Corey Ringer) 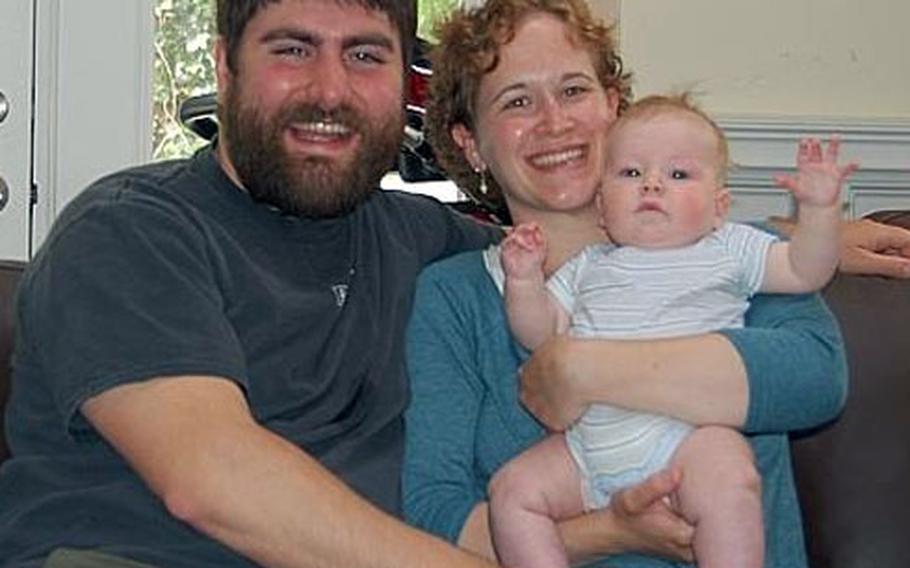 Danielle and Thomas Litchford with their son Sean. Thomas writes and blogs about the world of military male spouses. (Geoff Ziezulewicz/S&S)

The Pilarowski family&#8217;s soldier deployed to Iraq eight months ago. As Glenn Pilarowski and his two young sons said goodbye to mom, Glenn found it hard to take care of everything on his own.

"The second, third and fourth months were the hardest," said Pilarowski, 30, a substitute teacher and coach at Baumholder High School in Germany. "I wasn&#8217;t sure if I was being a good dad, a good husband. I was just doing everything to keep my head afloat."

"I was able to make them the meal and they got to talk to mom," he said. "And I thought, wait a second, I can do this."

At bases around the world there are men like Glenn Pilarowski.

Civilian husbands of military members face experiences as diverse as their wife&#8217;s assignments. But they all share a place on the margins of a male-dominated military culture, where they compose between 6 percent and 10 percent of the spouse population.

"Obviously it&#8217;s kind of like a novelty," said Thomas Litchford, a Navy husband, Military Spouse magazine contributor and blogger. "Any time I&#8217;ve been involved with a spouses group, I&#8217;m usually the only man."

They often live, socialize and work as the only nonuniformed man in the room in a culture that, despite the gender gains of recent decades, is still largely traditional.

"Every family in the military knows a male spouse," said Morten Ender, a military sociologist and professor at the U.S. Military Academy at West Point. "But they only know one."

Because there are so few male spouses, their experience differs from what a military wife sees, said Ender, who visits military communities to talk to spouses.

When a husband is a civilian and the wife is going to work in the military each day, it can confuse the breadwinner and gender roles, Ender said. The paucity of male spouses and the male-dominated nature of the military can compound the issue, especially if the husband has no prior experience.

"In a lot of social situations and interpersonal situations, these men are treated differently," Ender said. "People know how to treat a civilian wife but maybe not a civilian husband."

Litchford, the Navy husband, remembers his first spouse social event, a potluck dinner where he was the only guy.

Litchford said he found his own professional course, as a freelance writer working from home, while ceding the "go to work" role to his wife. But for other men, this can be difficult.

The military&#8217;s overwhelming number of men vs. women can be of concern to some military husbands as well, Litchford said, pointing to an e-mail he received from a man whose wife had just enlisted.

"If you think about the idea of your wife going out to sea for six to nine months with a crew of mostly men, your imagination can run away with you," he said.

"The military is a very masculine culture," Ender noted. "Even women in the military have a difficult time with that."

Mingling with male spouses also can arouse concerns within a community, where scuttlebutt is often a prime currency.

Ender recalled the story of an officer&#8217;s husband at a large stateside base who lived on the corner of a housing area.

"He would tell me that all the wives would wave and say hello, and that&#8217;s about it," Ender said.

Despite the shared experience of enduring their spouse&#8217;s deployment, husbands and wives left behind often don&#8217;t feel comfortable sharing this burden with each other, he said.

During those deployments, the officer&#8217;s husband was only invited to activities "where it was safe," Ender said.

Still, Ender said, that husband ended up serving as a male role model for the neighborhood kids while their fathers were gone.

Brett Hennagir, 31, met his wife, Renee, when he was still in the Air Force. He is now out of the military and caring for their two kids. His wife of four years, Tech. Sgt. Renee Hennagir, is stationed at England&#8217;s RAF Mildenhall.

When not watching their children, Braden, 6, and Autumn, 4, and enduring the occasional odd glance or comment about dad watching the kids, he&#8217;s getting his bachelor&#8217;s degree. He said the challenges of being a military spouse are much more pronounced overseas.

"In the States, it&#8217;s completely different," said Hennagir, who tends bar at the base club alongside a handful of other civilian husbands. Back in the States, he said, "we lived away from the base and there was never a need for me to go on the base.

Because of the transfer to a new assignment every three years and the geographical isolation of some overseas bases, finding a satisfying job &#8212; a key part of some men&#8217;s identities &#8212; can be difficult, Ender said.

"He can&#8217;t have a work role necessarily that gives him a sense of who he is," Ender said.

While social stigma still exists for stay-at-home dads in and out of the military, research indicates that dads can be just as nurturing as moms, according to Dr. Kurt Wical, a marriage and family therapist in Minnesota.

"There are fathers that can just blow that off," Wical said, but there are some instances where "fathers are looked at askance because they&#8217;re the ones in the park with the kids."

A stay-at-home father&#8217;s impact on his children at home is valuable, he said.

Aaron Anderson&#8217;s wife, Maj. Courtney Anderson, is doing her medical residency at the hospital on RAF Lakenheath in England. They are expecting their first child at the end of May.

He said he&#8217;s had a hard time finding work. Following his wife here has been good and bad, he said.

Going from active duty to stay-at-home dad also has been a transition for Jeff Reynolds, 25, a Baumholder, Germany, husband and former combat engineer who was deployed to Iraq for his daughter&#8217;s birth but is now watching her as his wife continues to wear the uniform.

Reynolds is studying for his degree in information technology, but there is no textbook for raising a toddler and advice from parents and friends only goes so far. When Tabitha was having stomach problems, he turned to Army Community Services.

"They were useful," he said. "I was able to hand them my daughter and let them have a look under the hood."

When Tabitha was potty training, Reynolds squatted over the toilet. But his 2-year-old still catches him standing up.

A big challenge for male spouses is just finding other men to connect with who are dealing with the same thing, according to Sue Hoppin, deputy director for spouse outreach at the Military Officers Association of America.

Some conventional military spouse resources aren&#8217;t so conventional for men, as Corey Ringer has learned.

Ringer arrived at Camp Humphreys, South Korea, in April with his officer wife. He&#8217;s endured being called "hausfrau," German for "housewife," but all ribbing has been in jest.

Still, male spouses get overlooked, he said, pointing to Military Spouse magazine articles about "what to expect in the bedroom when he returns" and tips for holding the groceries so that "he" is free to salute.

But as more family and spouse groups are made aware of the men in their midst, the programs grow and adapt, Hoppin said.

"Family support resources are always evolving," she said. "It used to be if the Army wanted you to have a family they&#8217;d issue you one. But they&#8217;re evolving to include atypical spouses."

While military husbands appear to cope better with deployment, they can also be reluctant to seek help if they need it, Ender said.

Pilarowski is enjoying this new role in his life, that extra time with his boys, making them dinner, wrestling and collectively counting off the days until mom gets home. Until then, Pilarowski does the work of two.

Stars and Stripes reporters Seth Robbins and Erik Slavin contributed to this story.

Husbands onlineOnline forums are emerging as places for military husbands to share their experiences.

For more information, check out these blogs by military husbands:

Spousal statisticsThe military services vary when it comes to keeping records of male military spouses, and numbers are sometimes made cloudier by dual-military marriages.

Army: Of the roughly 286,000 spouses in the active-duty Army, about 8 percent are male.