With school closing, Livorno volleyball team hopes to go out with a roar 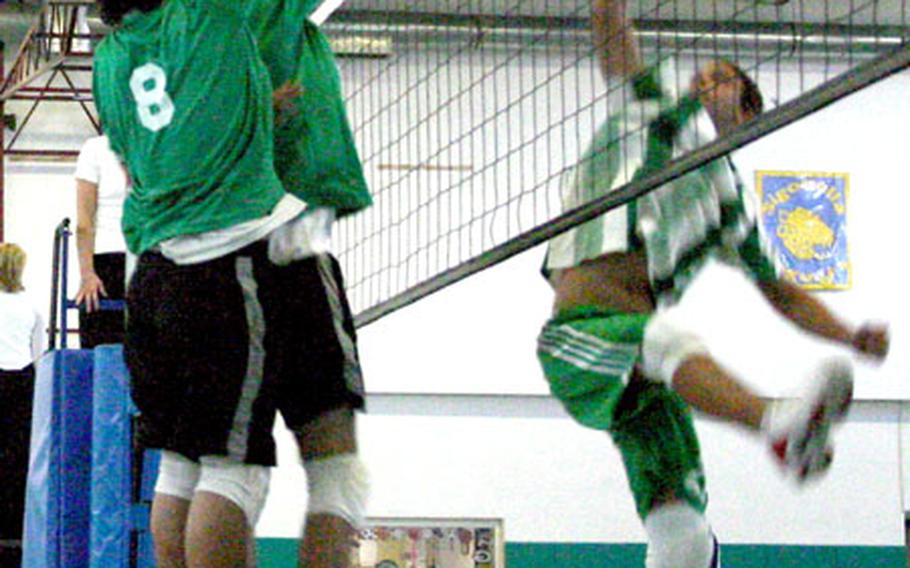 Teammates from the Livorno Lions, at left, go up for a block against a player from Ankara High School on Thursday. (Sandra Jontz / S&S) James Bartell, Livorno&#39;s boys volleyball coach, says this year&#39;s team "has heart," and is one of the best teams he has coached in his 16 years at the U.S. military high school in Italy. (Sandra Jontz / S&S)

NAPLES, Italy &#8212; As if the pressure of competing for your high school&#8217;s honor in the Mediterranean boys volleyball tournament wasn&#8217;t enough, the Livorno Lions are doing it as the last team from that high school.

&#8220;We&#8217;re playing with heart,&#8221; said senior and co-captain Colter Fernandez, 17, who learned earlier in the school year that low enrollments are prompting officials to close the place where he spent all four years of high school.

After a two-year lull, prompted by a lack of players, the school&#8217;s boys volleyball program picked up again last year. But their record was 0-10.

What a difference a year makes.

Thursday, the Livorno Lions team was in Naples, Italy, competing against other teams for the coveted title of the best in the Med. The finals are this weekend.

Officials from the Department of Defense Dependents Schools-Europe decided to close Livorno High School, its smallest, when the current school year ends. This year, the school has a student body of 26.

In American-Italian volleyball player Allessio Buccellato&#8217;s reading lab, for example, there is just one other student.

Next school year, high school-age students will have the option of attending London Central if they wish to remain in the DODDS system, attending an international school in Florence, Italy, homeschooling, or taking a correspondence course. The elementary school will remain open.

On Thursday, the team lost matches to Ankara and Aviano; in order to stay alive in the tournament, it must win both its games Friday against Sigonella and the American Overseas School in Rome.