With no time to waste, officials whiz through FOB's sewage deal 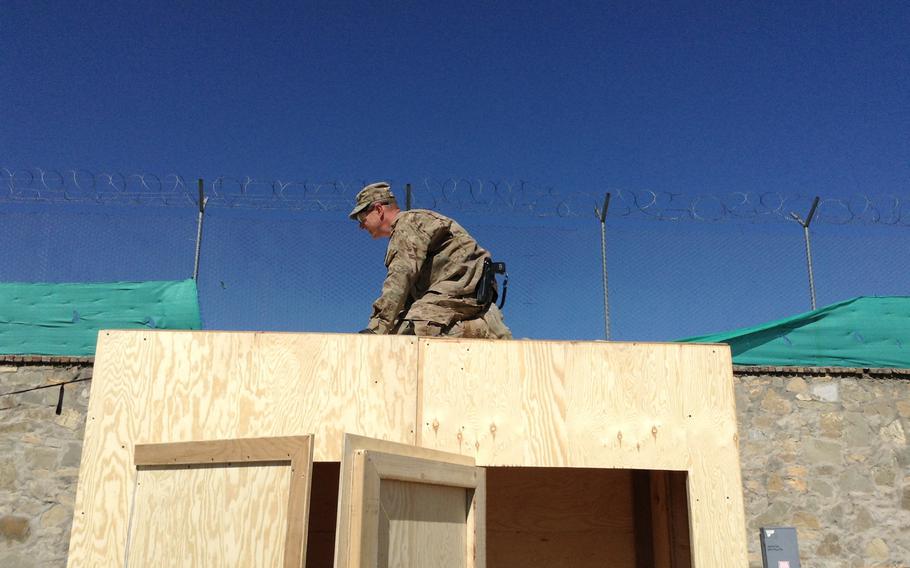 Sgt. Brian Paquette puts the finishing touches on a new waterless latrine at Forward Operating Base Rushmore. The latrine will get minimal use for now, but officers say it's only a matter of time before it will be needed as sanitation contracts end with the drawdown of U.S. forces from Afghanistan. (Cid Standifer/Stars and Stripes)

Sgt. Brian Paquette puts the finishing touches on a new waterless latrine at Forward Operating Base Rushmore. The latrine will get minimal use for now, but officers say it's only a matter of time before it will be needed as sanitation contracts end with the drawdown of U.S. forces from Afghanistan. (Cid Standifer/Stars and Stripes) 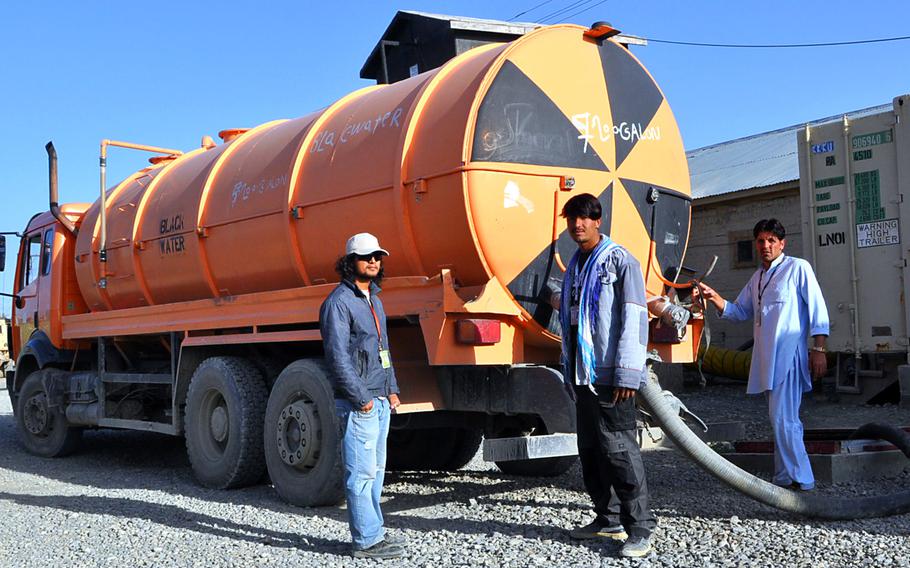 Afghan contractors collect wastewater on Forward Operating Base Rushmore on the last day of their Fluor Corp. contract. The same people will likely be back under a direct Army contract. (Cid Standifer/Stars and Stripes)

FORWARD OPERATING BASE RUSHMORE, Afghanistan — For a while, it looked like things were about to get down and dirty at this military outpost.

At a Monday team briefing, Sgt. Nolan Smith had an unwelcome reminder for everyone. “It’s going to be about two weeks of fun” starting May 1, the medic announced.

That’s when Fluor Corp.’s contracts for dealing with the FOB’s “gray” and “black” wastewater was scheduled to end, meaning soldiers would be bathing in bottled water and relieving themselves into “wag bags.”

Asked about the change, Lt. Col. Greg Cannata, head of the advising unit stationed here, grinned and said it was happening “because I like wag bags.”

More seriously, he explained that FOB Rushmore had been slated to be transferred to the Afghans by this summer as part of the U.S. withdrawal. But the plans changed and the Americans are staying at FOB Rushmore past October. However, the timeline to end the contract with Fluor, which runs base support services, had already been finalized.

The base’s fresh water comes from a well and purification system that can be run by Army personnel after Fluor’s contract expires. Wastewater, which was trucked away by Afghan subcontractors hired by Fluor, is a bigger problem.

The base is in the process of hiring the Afghan company directly. While there’s only one local company able to handle the water, Maj. Jon Belmont, a member of the advising team, said the bidding process may take another one to three weeks to play out. That means the unit has to avoid producing wastewater in the meantime. So, the base prepared to practically eliminate its wastewater output.

Cannata said the inconvenience is nothing that Army folks can’t handle.

“Right now, we’re still living pretty large compared to the guys who came here in 2001,” he said. “I don’t think it’s a poor standard of living. I think it’s acceptable and it will be the future.”

While defecating into sacks might shock the folks back home, Cannata warned that such “expeditionary” living will become more common as the U.S. shrinks its footprint in preparation for the complete withdrawal of all combat troops by the end of 2014.

Soldiers prepared as best they could. Two nights before the Fluor contract ended, the laundry room on this small base was running at full tilt. And Smith helpfully reminded everyone to take their “monthly shower” before the water runs out.

Belmont, who said his discomfort meter was recalibrated by a month of sleeping outdoors in a flight suit and a chemical suit during the Iraq invasion, has little patience for complaints about wag bags.

As soldiers joked about the latrine situation, he pulled out a water bottle and asked: “Does anyone need a bottle of suck it the hell up?”

But the base got a last minute reprieve. The evening the Fluor contract was set to expire, an anonymous higher-up took notice and expedited the new contracts. With the new waterless latrines built and ready for business, new estimates were that the base might only be high and dry for a day.

Cannata said the preparations they made will likely not be in vain, as they may still have to resort to alternative waste management down the road. As the drawdown continues, all sanitation contracts for U.S. bases here will end.

“The Army doesn’t want us to live hard if we don’t have to,” Cannata said, “but we can if we have to.”