With no one to care for his kids during deployment, GI on way out of Army 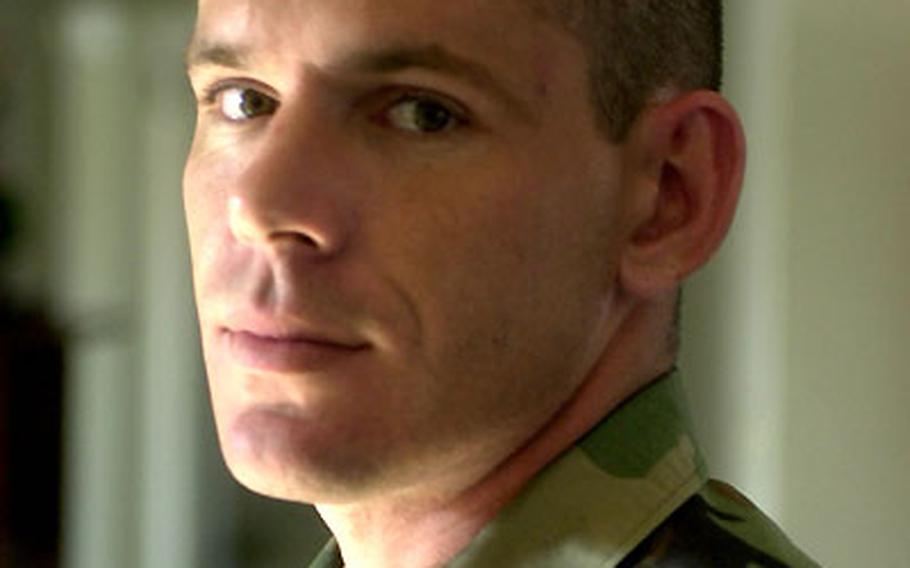 A big-rig truck driver for the Germany-based 70th Transportation Company, Storozuk has excelled in just about everything the Army has asked him to do.

He was a honor graduate at the driver&#8217;s academy, and last year he volunteered for combat duty in Afghanistan helping clear mines from Kandahar Airfield and rebuild the runway there.

With less than two years in uniform, he graduated among the top of his Primary Leadership Development Class, paving the way for him to pin on sergeant stripes.

His squad leader thinks highly of him. His platoon leader and company commander sing his praises. By all accounts, Storozuk should have a bright career in front of him.

The only problem is that Friday he&#8217;s getting kicked out of the Army.

Storozuk is not overweight, he doesn&#8217;t beat his wife and he hasn&#8217;t tested positive for drugs. Instead, Storozuk is getting the boot because he has kids.

In fact, Storozuk and his wife, Laura, have four kids. But in January, Laura had to go back to the States to care for her ailing father. By Army regulation, that meant Storozuk had to find someone who would be willing to care for his children in case he was deployed. And with his unit on the short list to go to Turkey, that was a very real possibility.

But after four months of trying to nail down what the Army calls a Family Care Plan, Storozuk&#8217;s leaders say they&#8217;ve been left will little choice.

Storozuk is among hundreds of soldiers who are kicked out of the Army every year for similar problems with the plan.

Storozuk says finding someone willing to care for four kids is easier said than done.

Instead, Storozuk had hoped he could get a compassionate reassignment. In fact, he had been asking if that was a possibility from the beginning.

Originally, he and his wife had hoped to relocate her father to Germany. They had taken care of her father in the States, and Laura thought she might be able to convince him to move to Germany.

With her dad getting care just outside of Tampa, Fla., home of the U.S. Central Command, Laura had hoped that her husband could get reassigned there.

CENTCOM commander Gen. Tommy Franks had even personally offered Storozuk a job as his driver.

Frank&#8217;s senior enlisted soldier at CENTCOM even weighed in.

But every time Storozuk asked about getting a reassignment, he got conflicting signals from his chain of command. His company commander said it would never get approved, and Storozuk said his platoon sergeant told him flat-out that he couldn&#8217;t even ask.

Indeed, even now there seems to be confusion on that point.

&#8220;I told him that he could submit it, but the likelihood was very high it would be disapproved,&#8221; said company commander Capt. E. Sean Lanier.

Lanier said that because it was his father-in-law that was sick, Storozuk simply didn&#8217;t qualify for reassignment, implying that it it had been one of his own parents, it might have been a different story.

Plus, Lanier said Storozuk had only brought up the idea of a reassignment about a month ago.

Storozuk&#8217;s platoon leader, however, has a different take on things. He remembers Storozuk asking repeatedly about a compassionate reassignment as early as February and said he believed his soldier did qualify for consideration, but that the hectic pace preparing for deployment left little time to make it happen.

Whatever the case, there is at least agreement that an otherwise excellent soldier is now leaving the Army.

Perhaps most confusing is that while he has had spotless record and is being forced out, others in his unit have had major problems, yet remain.

In the end, Army procedures may work in Storozuk&#8217;s favor.

He has already contacted an Army recruiter in Florida, who has told him that he can enlist back into the Army as soon as he gets home.

He does, however, lose any bonus money he would have received if had re-enlisted normally. And perhaps more importantly, his family must endure the stress of the situation, including pulling his children out of school early.