With new policy, enlisted sailors aiming for highest ranks should hit the books 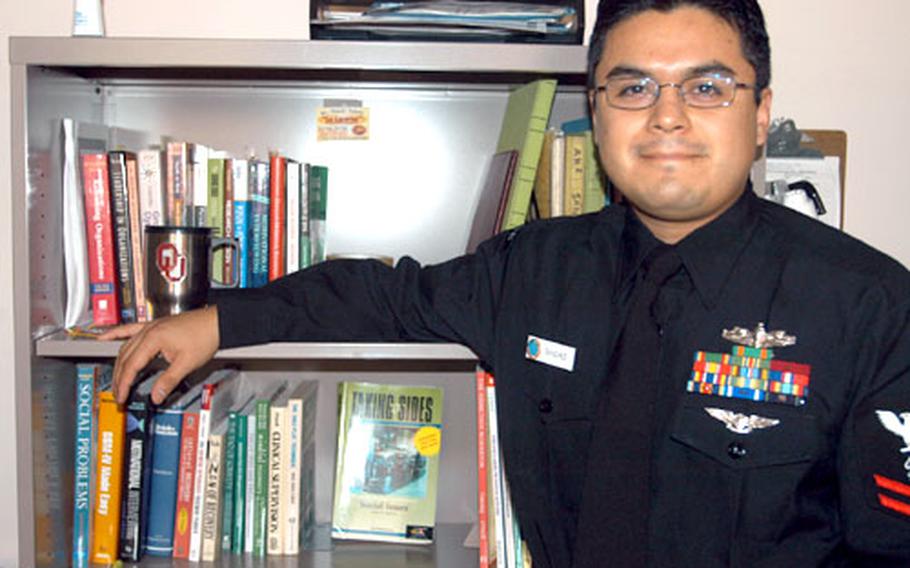 WASHINGTON &#8212; Enlisted sailors may have to hit the books if they want to reach the highest ranks.

A new Navy military education policy, which in part guides professional development for all sailors, outlines general goals for emphasizing continuing education courses and college-level degrees for all enlisted personnel.

Ed Barker, spokesman for the Naval Education and Training Command, said officials hope by 2010 to mandate associate and bachelor&#8217;s degrees for sailors advancing to senior ranks, though no specific timetables or benchmarks have been set.

In announcing the education proposals last month, Vice Adm. Alfred G. Harms Jr. said higher education is essential for enlisted servicemen &#8220;to better prepare them to operate tomorrow&#8217;s fleet&#8221; and to ensure they are prepared to take over leadership roles in the Navy.

Currently servicemen being promoted to the highest enlisted ranks must graduate from the Navy&#8217;s Senior Enlisted Academy in Rhode Island. Air Force Senior Master Sgt. David Egermier, spokesman for the academy, said the proposed rule change likely would not affect operations there, since most of their courses are specialized military management lessons.

Petty Officer 2nd Class Elias Sanchez, 32, is working on a master&#8217;s degree in human relations from the University of Oklahoma&#8217;s satellite campus in Naples, Italy, and called the proposal a &#8220;positive challenge&#8221; for all sailors.

Navy leaders have been supportive in encouraging sailors to pursue higher education when they&#8217;re assigned to shore duty, Sanchez said. Next, they&#8217;ll have to tackle making it easy to earn degrees while underway on ship.

Officials from the other services said none requires collegiate degrees for promotion through the enlisted ranks, although all three do consider higher education as a major factor in military advancement.

Cmdr. Ron Hill, spokesman for the Chief of Naval Personnel, said about 2.5 percent of the Navy&#8217;s enlisted sailors have bachelor&#8217;s degrees or higher. Naval equipment and support services are becoming more complex, he said, and the sailors will have to keep up with those demands.