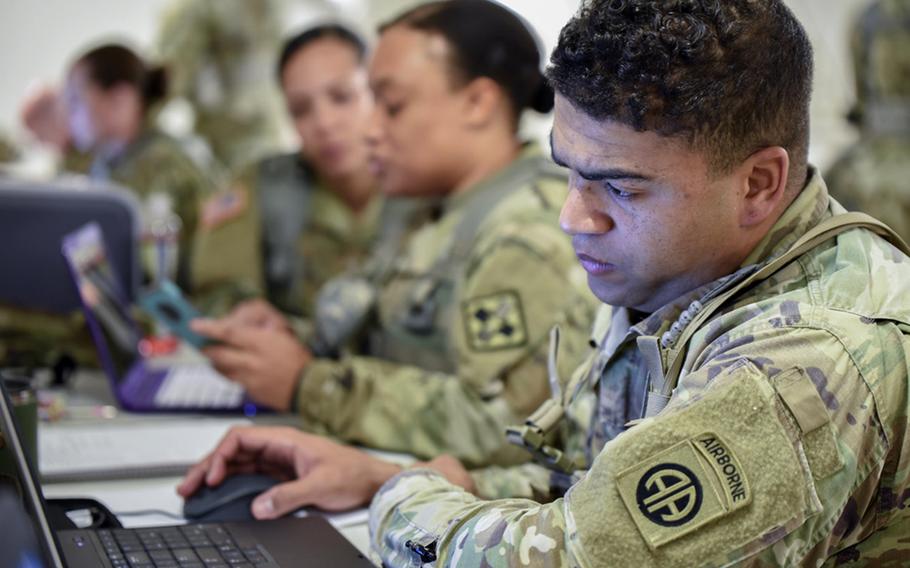 Students enrolled in the Army's Captains Career Course participate in a simulated natural disaster field training exercise at Camp Bullis, Texas, in May 2019. Officers are now required to take the standardized GRE test when they're enrolled in the CCC. (Jose Rodriguez/U.S. Army)

But not everyone thinks the move will have the results the Army is looking for.

Many graduate school programs use the computer-based, standardized test to assess applicants, but the Army sees the test as a tool to determine which officers would be best-suited to pursue advanced degree programs and other educational opportunities.

It’s about “knowing where their potentials lie,” he said. “Not everybody is afforded the opportunity to participate” in the Army’s competitive, advanced education programs.

The Army will pay for an officer to take the standardized test one time during the career course. With about 4,000 captains expected to take the test in fiscal year 2020, it means the tab for one year of GRE test-taking is expected to be in the region of $800,000.

No preparation time for the GRE will be built into the career course, but free online tools are available to help officers who want to study before taking the test, said Army Talent Management Task Force spokeswoman, Lt. Col. Kari McEwen.

Officers can choose to retake the GRE after taking it on the Army’s dime, and can then choose which set of results they want retained in their records, Johnson said.

A poor GRE result won’t derail an officer’s career but could point the officer in a different direction than graduate school or other competitive education programs within the Army, Johnson said.

The test requirement was rolled out last month at career courses at Fort Sill, Okla., and Fort Leonard Wood, Mo. Since then, more than 150 officers have taken the GRE, officials said.

The GRE is “kind of the gold standard for success” in graduate school, said Col. Paul Berg, the Army University director of academic affairs.

It was the Army Secretary who decided to have officers take the test during the career course, while they are in an academic environment, he said.

The Captains Career Course is designed to prepare officers for higher-level staff and company command jobs. Officers usually take the course three to five years after graduating from the Basic Officer Leader Course.

Taking the GRE within that time-frame should make preparing for it easier, said Johnson.

But some education experts caution that the test has its limitations and should be used alongside other assessments to gauge soldier talent, particularly leadership ability.

While the GRE measures “academic knowledge and analytical skills,” said Robert Sternberg, professor of human development at Cornell University, “there are a lot of people who are good analytical test-takers but who are not particularly strong in the additional skills leaders need for success.”

Those include creativity, common sense, emotional intelligence, wisdom, integrity “and most of all, commitment to giving their job their all,” he said.

The Army plans to introduce more assessments and use them across a soldier’s career.

“They won’t necessarily be commercial assessments like the GRE,” Johnson said. “Some the Army is designing … in the interest of learning more about its soldiers and more specifically about a soldier’s talent.”

But leadership cannot be measured by GRE scores alone, said Nathan Kuncel, the Marvin D. Dunnette Distinguished Professor at the University of Minnesota, who’s contributed to research that found, among other things, that GRE scores are good predictors of GPA.

“It’s certainly true that the more knowledgeable leaders get better results and can problem-solve unexpected roadblocks,” he said, referring to observations he made while watching his son’s scout group. “Cognitive matters, but at the same time, the boys with good leadership personalities and skills get quicker and better work out of their patrols. Leadership is cognitive and character combined.”

Cornell’s Sternberg questioned the usefulness of the GRE at gauging who would make a good leader. Leadership problems, he said, are not multiple choice.

Instead of making officers take the GRE during the Captains Career Course, “The Army might want to construct its own tests that are reliable and valid for measuring skills that matter most for success in leadership positions,” he said.

“Off-the-shelf tests,” like the GRE, “measure skills that are rather different from those I imagine that the Army is looking for.”