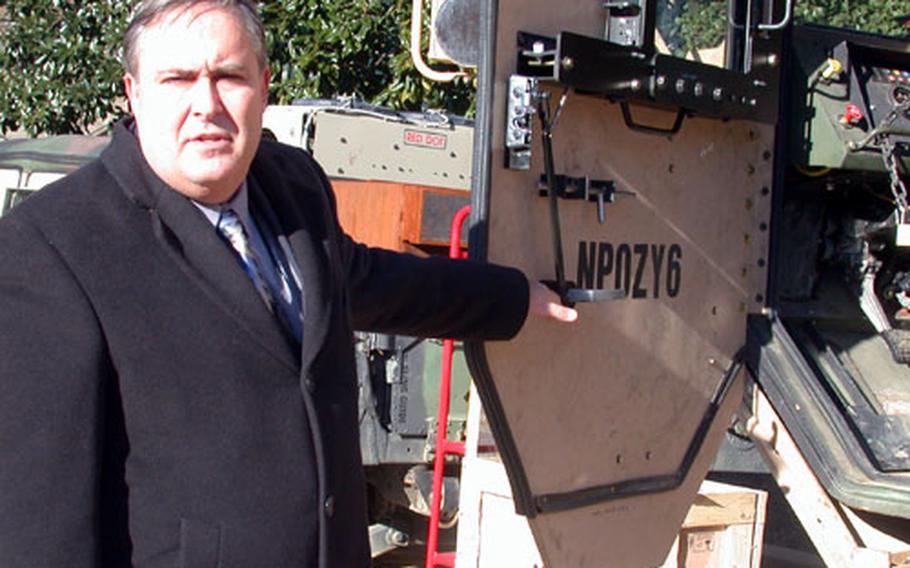 Gary Motsek, the Army’s deputy director for support operations at the U.S. Army Material Command at Fort Belvoir, Va., shows the armored plating on the door of a HEMTT, the Army’s Heavy Expanded Mobility Tactical Truck, at the Pentagon on Wednesday. (Lisa Burgess / S&S)

ARLINGTON, Va. &#8212; After expanding its contract to acquire armored Humvees at a rate of 550 per month instead of 450, the Army has now turned its focus toward armoring its trucks in Iraq by June, Army officials said Wednesday.

And in the future, thanks to lessons learned in Iraq and Afghanistan, all Army vehicles will be designed so they can be quickly armored with a kit &#8212; even if that vehicle was never designed for combat, according to Gary Motsek, the Army&#8217;s deputy director for support operations at the U.S. Army Material Command at Fort Belvoir, Va.

The Humvee issue is now on track and fully funded, said Maj. Gen. Stephen Speakes, who joined Brig. Gen. Jeffrey Sorenson and other Army officials to discuss the armoring issue.

The Army has sought out manufacturers to acquire armor kits for the larger vehicles. In August 2003, there were seven companies that supplied armor kits. There are now more than 20.

Today, 53 percent of the medium and heavy vehicles in Iraq that commanders have said they would like armored actually have such protection, according to statistics provided by the Army.

Speakes, who is in charge of Force Development for the Army, said the service plans to spend $4.1 billion to armor all of its wheeled vehicles by next summer.

Level I is the Army&#8217;s term for vehicles that were built from the ground-up to support armor, including a reinforced chassis to support the extra weight and configurations of the plating.

Level II is what the Army calls specially designed kits that are manufactured in the United States, then shipped to the Iraq theater for soldiers to install on their vehicles.

There is another Level, Level III, which Army officials use to describe the ad-hoc additions that soldiers devise on their own to protect their vehicles in the field.

Armoring vehicles not normally designed for combat operations became a serious issue in Iraq starting in early September 2003, as improvised explosive devices began to take more and more of a toll on U.S. forces in Iraq.

The Senate Armed Services Committee will hold hearings on the Iraq war when the new Congress convenes next month, including an examination of criticism that the Defense Department failed to prepare for the insurgency and went into action with a shortage of armor for trucks and Humvees, the panel&#8217;s ranking Democrat, Sen. Carl Levin, D-Mich., told the Washington Post on Tuesday.