With its accreditation status on probation, Zama eyes fresh start 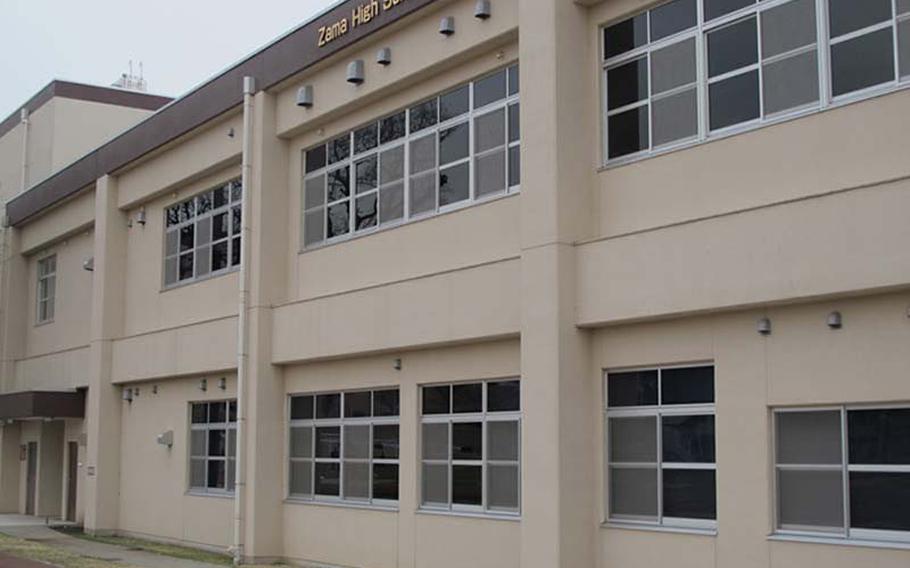 Earlier this year, an independent accreditation review found that Zama American High School, shown here, failed to meet accreditation standards on governance, teaching and learning, and in other areas making it the first military base school to have its accreditation status put on probation. In an effort to get off academic probation, nearly half its staff has been replaced for the new school year. (Erik Slavin/Stars and Stripes)

TOKYO &mdash; Zama American High School has replaced nearly half its staff for the new school year, six months after it became the first military base school to have its accreditation status put on probation.

The 20 new teachers, administrators and support employees are the most visible example of what Department of Defense Education Activity officials say is a comprehensive plan to eliminate the dysfunctional climate that multiple investigations found flourishing for years at the school.

The personnel changes include replacing all of the administrators who started the last school year, and the transfer to Germany of a controversial union representative who clashed with them over Zama&rsquo;s direction.

Zama&rsquo;s teachers began work last Tuesday &mdash; two days earlier than other schools in the region &mdash; for meetings on how to improve upon the marks that saddled the school with probation from accreditation agency AdvancED in February. Probation is the lowest level that allows a school to hold onto its accreditation status.

Students who graduate from non-accredited schools may have difficulty applying to colleges, obtaining financial aid or joining the military.

The AdvancED report determined that Zama failed to meet standards in six of seven broad categories, ranging from poor test scores to the school&rsquo;s lack of vision and purpose, its substandard governance and leadership and its troubled relationships with parents.

&ldquo;I think the report itself was a wake-up call,&rdquo; said Heather Rhine, one of the school&rsquo;s two new assistant principals. &ldquo;We have a clear path now on where we&rsquo;re going.&rdquo;

Besides bringing in new personnel and expanding course offerings for the start of school on Monday, the school has placed employees, parents and community members into &ldquo;continuous school improvement&rdquo; groups that will track progress in the areas AdvancED found lacking. Students, parents and staff will have access to Web pages that will document and track progress toward improving in each area, school officials said.

Zama has added an additional assistant principal position and a teaching coach, as well as one part-time and three new full-time teachers.

An AdvancED team will return to Zama this fall to discuss the school&rsquo;s preparations for its accreditation re-evaluation in April.

Much of Zama&rsquo;s prospects for success hinge on the ability of the new administration and teachers to work together on better terms than their predecessors.

The accreditation report noted that the school suffered from an &ldquo;obstructive and negative climate perpetuated by an intimidating, manipulative minority of staff members.&rdquo;

Teachers at Zama who spoke with Stars and Stripes during a DODEA-organized conference call Thursday said they had been focusing on classroom strategies, rather than discussion with new teachers about the past working climate.

&ldquo;[Last year&rsquo;s climate] is not something we&rsquo;ve been talking about at all,&rdquo; said Alethea Daniels, in her seventh year at the school.

There certainly are hopes of a brighter future for a school whose students include children of the Army&rsquo;s top leaders in the region and the naval aviation wing of the USS George Washington, the military&rsquo;s only forward-deployed aircraft carrier. Earlier this year, parents told Stars and Stripes and accreditation reviewers that while many Zama teachers displayed dedication and interest, a significant number of others weren&rsquo;t willing to spend extra time to help struggling students.

&ldquo;Parents aren&rsquo;t happy with the attitudes there,&rdquo; said parent Paul Cote, who has had at least one child in Zama schools since 2005 and was the only parent interviewed who was willing to be identified for a June Stars and Stripes report on the situation.

Privately, school system employees critical of Zama&rsquo;s recent past said last week that they weren&rsquo;t sure yet if a handful of the staff were playing along in the interest of self-preservation, or if they really have bought into the new program. Nevertheless, they say the climate on campus is much improved.

During the past 10 years, teachers filed a slew of complaints directed toward three separate administrations that ranged from multiple counts of racism to grievances over operational changes that didn&rsquo;t fall in line with past practices.

Former principals Erik Swanson and Jerry Ashby each told Stars and Stripes earlier this year that their efforts to improve the school were stymied. They blamed the school&rsquo;s union leadership.

Brian Chance, Zama&rsquo;s Federal Education Association representative during the past decade, was transferred to Kaiserslautern Middle School in Germany this summer as part of a &ldquo;management-directed reassignment.&rdquo; Chance remains the FEA&rsquo;s representative, as well as a board member, to the National Education Association, the largest professional union in the United States.

Management-directed reassignments are neither promotions nor demotions. They occur when the agency &ldquo;has a legitimate organizational reason&rdquo; for making a move, according to federal guidelines.

Neither Chance nor Debra Degalis, the union&rsquo;s Pacific director, responded to messages left by Stars and Stripes.

Gregory Bull, the new principal at Kaiserslautern Middle School, said Friday he was recently notified that an employee was coming from Japan, and that he would arrive sometime in September.

Bull didn&rsquo;t know why Chance, an information specialist who will work in the school&rsquo;s media center, was coming to KMS after the start of the school year.

&ldquo;I don&rsquo;t know the history [of what took place at Zama American High School] and I&rsquo;m not concerned about that,&rdquo; said Bull, who was reassigned from Fort Campbell High School in Kentucky, where he was the assistant principal.

&ldquo;I&rsquo;m excited to have him, because he&rsquo;s an integral part of what we do in our school,&rdquo; Bull said of Chance.

Chance is one of eight former staff members at Zama who either transferred or were reassigned within DODEA. One teacher was fired; six others retired or left under other circumstances.

It remains unclear whether any of the staff moves were linked to a recent investigation into allegations of inappropriate behavior at Zama.

Just prior to the end of the 2011-12 school year, U.S. Army Japan sent a senior officer from its staff to investigate the allegations, at DODEA&rsquo;s request.

DODEA spokesman Charly Hoff said that although the investigation has been completed, he could not discuss the allegations and findings in the report prior to its redaction. Stars and Stripes has requested a copy of the redacted report.