With insider help, assailants in 'green-on-blue' attacks slip away 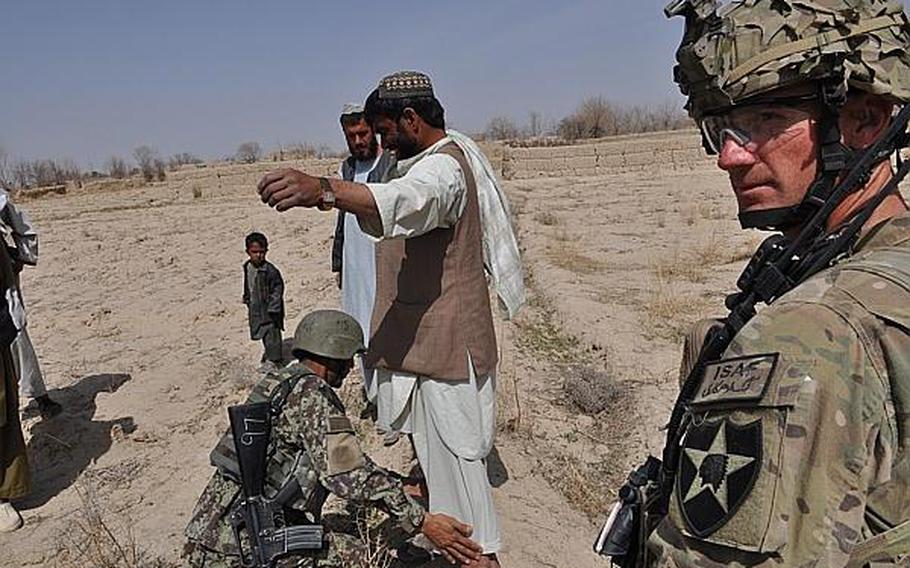 Buy Photo
An Afghan soldier searches a villager in in Kandahar province while a U.S. soldier looks on. Recently, some Afghans who have attacked coalition troops have managed to escape prosecution, perhaps with the help of others sympathetic to the Taliban cause. (Heath Druzin/Stars and Stripes)

Buy Photo
An Afghan soldier searches a villager in in Kandahar province while a U.S. soldier looks on. Recently, some Afghans who have attacked coalition troops have managed to escape prosecution, perhaps with the help of others sympathetic to the Taliban cause. (Heath Druzin/Stars and Stripes) 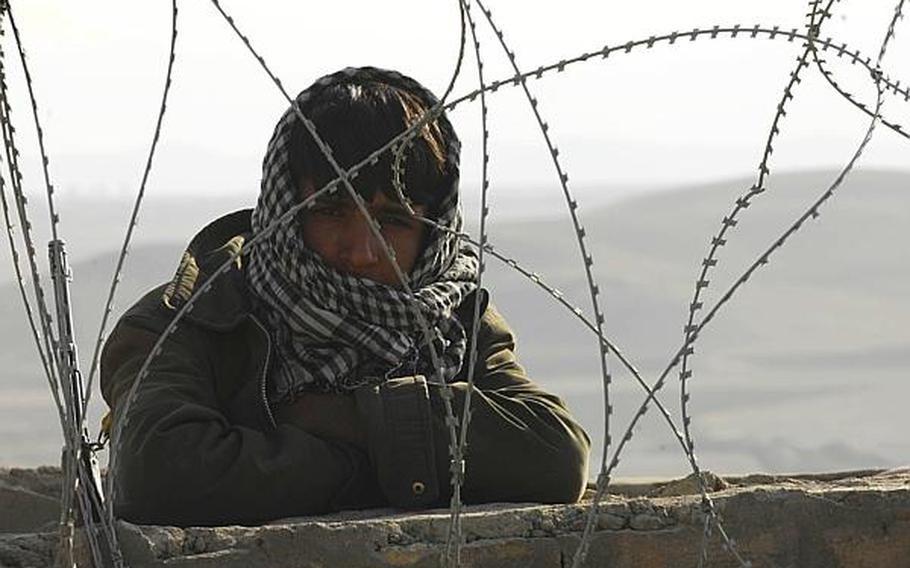 An Afghan guard peers out from behind the walls of a prison in Qalat, Afghanistan, in this 2009 photo. Recently, some Afghans who have attacked coalition troops have managed to escape prosecution, perhaps with the help of others sympathetic to the Taliban cause. (U.S. Air Force photo)

KABUL — Immediately after Lamber Khan opened fire on his allies, killing one Slovak soldier and wounding six others, he was arrested; five days later he escaped, and on Tuesday, the Taliban’s English-language website hailed him as a hero and posted a gloating interview with him.

The scenario is disturbingly familiar: turncoat Afghan troops attack their allies and manage to get away, despite the presence of other Afghan forces.

“The enemy is trying hard to infiltrate the security forces and many of the people who do the insider attacks are the agents of the enemy,” said Gen. Saeed Wasiq Shah, who serves with the Afghan National Army’s 205 Corps in Kandahar, where the July 9 shooting occurred.

On Tuesday, a week after Khan escaped, he appeared with his erstwhile jailer in an interview entitled “Champion who attacked foreign invaders at Kandahar airbase narrates his heroic deed” on Shahamat English, the Taliban’s website.

While some attackers in these so-called green-on-blue attacks are gunned down and others arrested, often, they simply vanish. Neither the Afghan interior nor defense ministries could provide statistics on the number of attackers who have escaped, but the Taliban has capitalized on several such incidents, welcoming the attackers as conquering heroes.

In March, a teenage boy who may have been working for the Afghan National Army fatally stabbed an American soldier and escaped. In that case as well, the Taliban used the incident as a public relations windfall, claiming the boy had joined their ranks after the attack.

The number of attacks by Afghan security forces on coalition troops has greatly declined this year, after reaching crisis levels in 2012, when more than 60 foreign troops were killed and many more injured. The attacks forced NATO to temporarily suspend joint operations with the Afghan army and police.

Meanwhile, hundreds of Afghan soldiers and police also have died at the hands of their colleagues.

Initially calling the shootings “isolated incidents,” the U.S.-led military coalition instituted policies to better protect troops, focusing on increased cultural training as well as “guardian angel” programs, in which armed troops would keep watch on events, like weapons training and village meetings, where foreign soldiers could be more vulnerable to attack.

The steps appear to have made a difference. This year, only eight international troops and two foreign civilians have been killed in suspected insider attacks, according to a count by The Associated Press, though much of the country’s traditional summer fighting season, when violence tends to spike, remains.

In laying out their strategy for their annual spring offensive, the Taliban said infiltrating the ranks of the Afghan security forces would be a major focus this year.

In recent guerrilla wars, insider attacks have been rare because insurgents usually used their infiltrators to gather intelligence on the enemy’s intentions, rather than wasting them on small-scale attacks against enemy troops.

Relations have long been strained between international servicemembers, many of whom complain their Afghan counterparts are undisciplined and lazy, and Afghan troops, who often view foreign troops as rude and profane.

Even some Afghan troops who condemn such attacks admit that they would be hard-pressed to refrain from helping a comrade who had attacked foreigners.

“If a cousin or someone you know fights with another tribesman, and even if your cousin is guilty and he brings himself to your custody, you wouldn’t allow him to go into the hands of his enemy,” said Khan, an Afghan soldier in southern Afghanistan who would only go by his last name. “This is the same — if an Afghan is in a big fight with a foreigner, the Afghan is your cousin and you wouldn’t let your cousin be in danger. I would definitely do the same.”

Mohammad Jameel, who serves with the Afghan National Army in eastern Afghanistan, said some foreign troops continue to be disrespectful toward their Afghan colleagues, raising the possibility of such shootings and escapes. Despite his frustrations, though, Jameel said he would not help a comrade escape after an insider attack.

“The law should be enforced on the person who commits a crime, whether it’s your brother, your countryman, or a foreigner,” he said.

U.S. troops interviewed for this story said they are trying to strike the balance between building trust and staying safe.

U.S. Army Sgt. Jongin Choi, another infantryman based at Sultan Khel, said the relationship between Afghan troops and Americans is generally good and that getting closer rather than putting up walls can help reduce the threat.

“That was our biggest problem back then,” he said of his last deployment, in Kabul. “It was hard to trust anyone. But at the same time, we can’t show that we can’t trust them.

“Ironically, the more you get closer to them, the more you understand them, and then you’ll be able to figure out which ones are bad.”