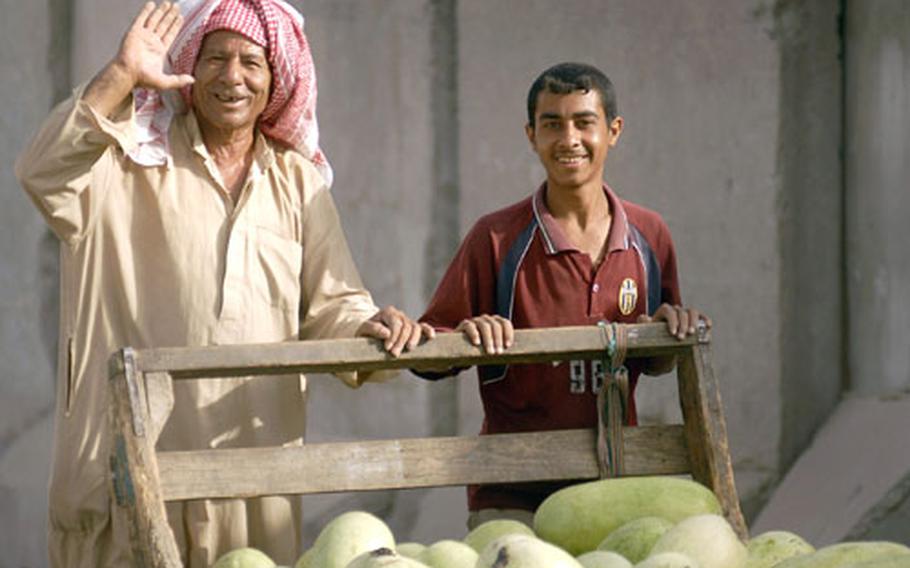 BAGHDAD &#8212; A week earlier, Pvt. Jacob Espinoza hopscotched across the fly-infested sludge, keeping one eye out for the enemy and the other on the river of raw sewage he was trying to traverse.

At Jamilla market &#8212; the largest in northeastern Baghdad &#8212; the dirt roads where vendors hawk the fruits and vegetables that feed much of the city were flooded over with stink. The waste, which ran 12 inches deep in parts, also made for a slippery, gag-inducing patrol.

"It wasn&#8217;t much fun. You had to try and jump from stone to stone so your boots wouldn&#8217;t get in it. And when the wind would pick up in a certain direction the smell would just hit you. It was horrible," said Espinoza, a soldier with Task Force 1-6 Infantry.

On a return trip Wednesday, much to Espinoza&#8217;s relief, most of the black sludge was removed from the market alleys. In the Jamilla district of Sadr City in Baghdad, spilled human waste at the market isn&#8217;t the only thing to be cleared from the streets these days.

When Task Force 1-6 took control of the area in early May, they entered a cesspool of violence. For the Baumholder, Germany-based infantrymen, much of the fighting centered around the construction of a three mile security wall that separates Jamilla from Sadr City&#8217;s main residential areas to the north.

The wall was constructed in response to the fighting that erupted in March in Sadr City, which functioned as a launching point for mortar assaults on the nearby Green Zone.

The soldiers of 1-6, who were continuing work started by other units assigned to the 3rd Brigade, 4th Infantry Division, faced contact with the enemy within 24 hours of being on the job. Encounters with rocket-propelled grenades, sniper fire and mortars were a daily occurrence, commanders said.

But since the wall project was completed more than two weeks ago, firefights has been replaced with intelligence gathering, civic engagement and reconstruction.

Sgt. Michael Estka, 26, said all the recent handshaking and getting-to-know-the-people missions don&#8217;t come quite as naturally to soldiers as the fighting that marked the first part of their mission in Sadr City.

Now, soldiers patrol through the markets to see what types of services people need. While the Iraqi army continues its push through the residential zone north of the wall, coalition forces are focused on things such as restoring electricity and handing out micro business grants in Jamilla.

With the leadership of the Mahdi Army, Muqtada al-Sadr&#8217;s milita, scattered, the local population needs to see that the market is secure and that jobs are returning, Eifler said.

"Infuse money. Infuse jobs. Get this area secured," Eifler said. "This is a fragile time right now. Everything is turbocharged."

When the extremists held ground at the Jamilla market, they were funding their operations through a widespread extortion racket that required business owners to hand over sums of money to the militia fighters.

With most of the ringleaders gone from the area, perhaps reorganizing to fight another day, lower level leaders remain in town. Soldiers now spend their time trying to round up suspects left behind and kick-start businesses that were ravaged after all the conflict.

On a recent patrol of the Jamilla market, Poole&#8217;s soldiers made the rounds, stopping off to talk with merchants in an effort to root out some intelligence on their enemies.

During the tour through town the soldiers navigated clogged intersections where cars, trucks and horse-drawn carriages were at a standstill. Exhaust fumes, fresh produce and the reek from small puddles of leftover sewage filled the air.

At the market shops Charlie Company soldiers heard a familiar refrain from merchants. While conditions are much improved now that the fighting has ceased, business still isn&#8217;t what it used to be, merchants said.

Poole told the merchant he understood the problem and that efforts are being made to get more security checkpoints opened. Ultimately, it&#8217;s something that Iraqi government officials need to support, however.

As the soldiers worked their way through the market, complaints continued to pop up.

On the street and inside the shops, marketgoers voiced their wants: More trash pickup and more regular sewage clearings. The fact that coalition forces arranged for the removal of the sewage and have hired teams of locals to sweep the streets of debris didn&#8217;t seem to register with some.

"Now that the security is better they&#8217;ll be cleaning up the trash and sewage more often," Poole told a shop owner.

It&#8217;s not all customer service work, though. The main focus for Poole&#8217;s team is intelligence gathering.

During a two-week span, Poole&#8217;s 3rd Platoon detained 15 suspects with the help of their tipsters and informants, he said. If the security gains hold then efforts to rebuild infrastructure will continue to advance, commanders said.

In the weeks ahead, Eifler says he wants his unit to get businesses hard hit by the recent fighting back on track. Apart from handing out the micro grants, multimillion-dollar public works projects are being developed. From the establishment of a local neighborhood watch group to getting a local public works department set up, there&#8217;s been a flurry of action.

Get the Flash Player to see this player.//