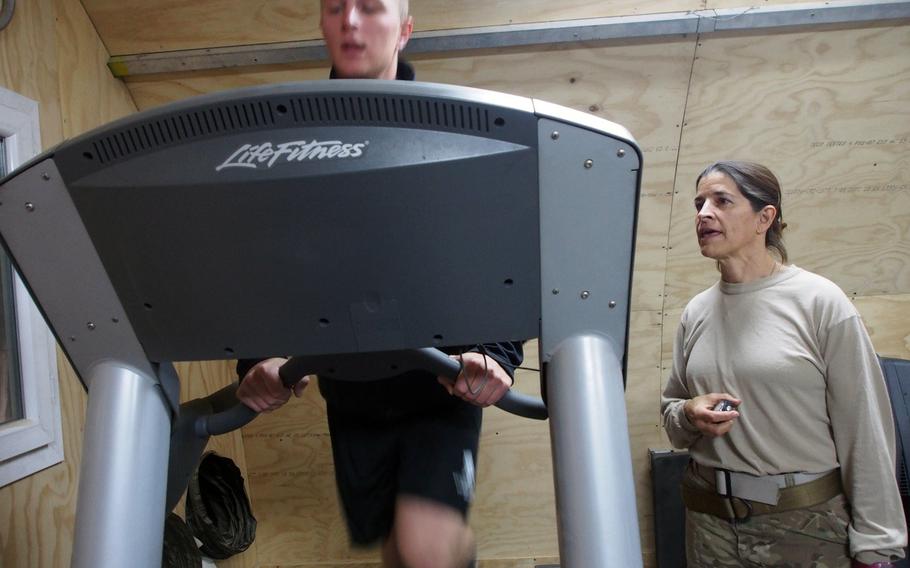 U.S. Army occupational therapist Maj. Marji Burniston monitors Air Force Airman 1st Class Samuel Davies, 21, as he runs on a treadmill at the Concussion Specialty Care Center at Bagram Air Field, in Afghanistan, days after Davies sustained a head injury. Sensor technology, developed jointly by the U.S. military and NFL, is improving diagnosis and treatment of traumatic brain injuries, one of the most common injuries for deployed troops. (Heath Druzin/Stars and Stripes)

U.S. Army occupational therapist Maj. Marji Burniston monitors Air Force Airman 1st Class Samuel Davies, 21, as he runs on a treadmill at the Concussion Specialty Care Center at Bagram Air Field, in Afghanistan, days after Davies sustained a head injury. Sensor technology, developed jointly by the U.S. military and NFL, is improving diagnosis and treatment of traumatic brain injuries, one of the most common injuries for deployed troops. (Heath Druzin/Stars and Stripes) 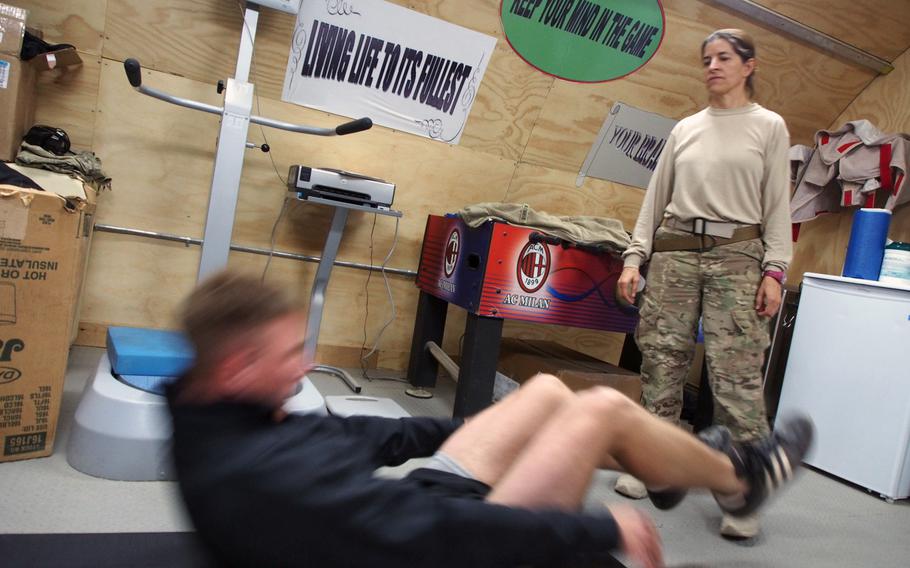 Air Force Airman 1st Class Samuel Davies, 21, does crunches as part of his recovery from a head injury as U.S. Army occupational therapist Maj. Marji Burniston looks on at the Concussion Specialty Care Center at Bagram Air Field, in Afghanistan on Oct. 26, 2013. Sensor technology, developed jointly by the U.S. military and NFL, is improving diagnosis and treatment of traumatic brain injuries, one of the most common injuries for deployed troops. (Heath Druzin/Stars and Stripes) 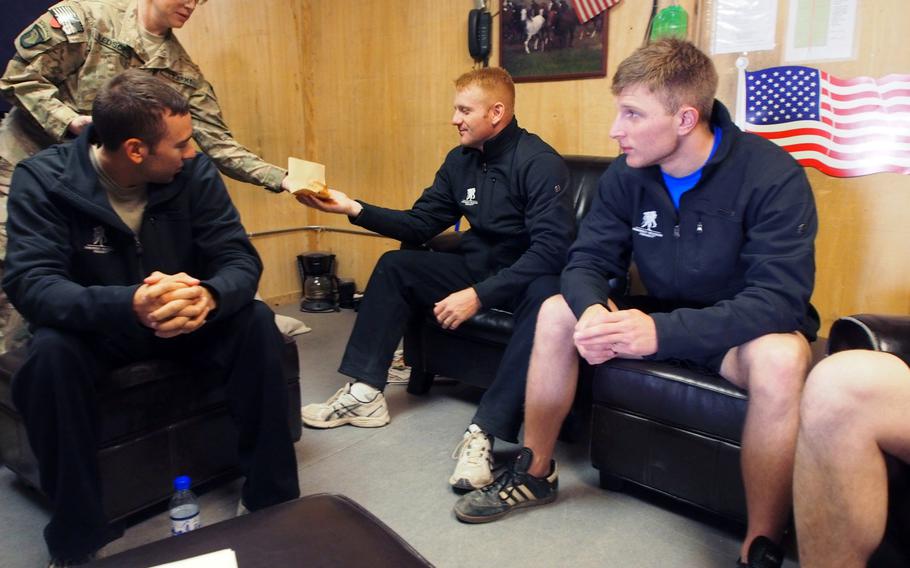 Four Air Force airmen sit and chat at the Concussion Specialty Care Center at Bagram Air Field, in Afghanistan, on Oct. 26, 2013, days after sustaining concussions when a suicide bomber detonated near their convoy. Troops like these are benefiting from new sensor technology that is helping doctors better diagnose and treat concussions, also known as traumatic brain injuries. (Heath Druzin/Stars and Stripes) 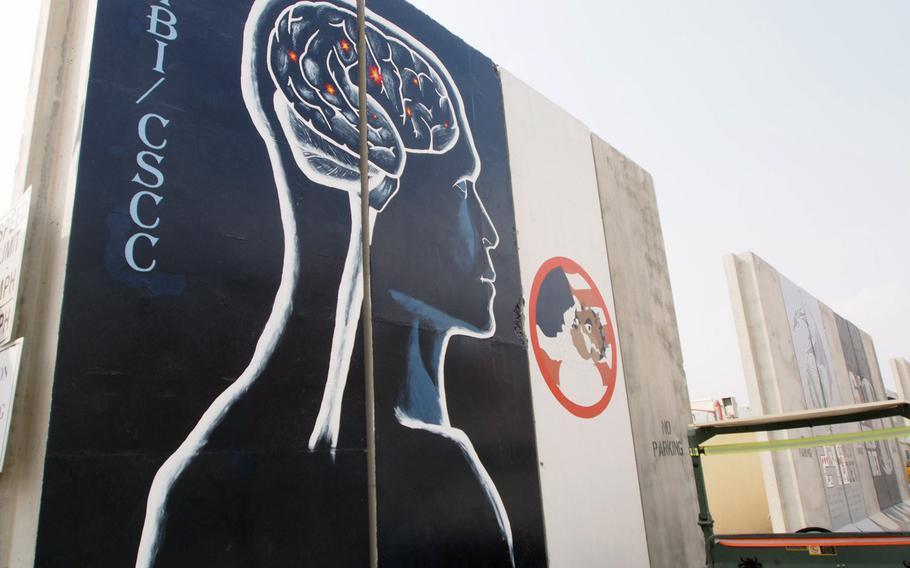 A mural on a concrete blast wall for the Concussion Specialty Care Center at Bagram Air Field, in Afghanistan, where many troops who have suffered a traumatic brain injury are sent to recover. Medical professionals at the center say new sensor technology is helping them better treat patients with head injuries. (Heath Druzin/Stars and Stripes)

BAGRAM AIR FIELD, Afghanistan — Despite the constant warrior metaphors and references to “the trenches” from sports commentators, the experience of NFL players and troops at war is, of course, incomparable. But they do share one thing in common: a high risk of suffering traumatic brain injuries.

Government scientists and military doctors have been working with the NFL to develop sensor technology to study traumatic brain injury (TBI), or concussion, a still little-understood phenomenon that affects hundreds of thousands of troops who have served in Iraq and Afghanistan, where the roadside bomb has been a common weapon of insurgents.

The NFL is in the midst of its own concussion crisis, with an increasing number of high-profile former stars speaking publicly about what many doctors see as the devastating effects of repeated blows to the head.

For the past three years, the NFL and U.S. military have been working closely together to develop the technology, which can aid the detection and treatment of concussions in both football players and soldiers, said U.S. Army Lt. Col. Frank Lozano, product manager for soldier protective equipment at the Army’s Program Executive Office.

“This ongoing collaboration has allowed both communities to better understand the best ideas, processes and technologies for the increased detection of TBI,” Lozano said.

TBI has been one of the most common injuries sustained by troops in Iraq and Afghanistan, with studies finding up to 20 percent of all U.S. veterans from those wars sustaining such an injury, with numbers for front line troops much higher.

The sensors, which are roughly the size of a watch and weigh two ounces, are placed in troops’ helmets, on their torsos and in vehicles. They measure the two types of force troops experience from blasts — overpressure and acceleration – and the sensors can even tell if a helmet is being worn, to avoid false readings in case a servicemember drops the helmet. When the sensors do register a blast, the reading will show either a green, yellow or amber light, meaning no exposure, moderate exposure or serious exposure, respectively.

The readings can more quickly and accurately tell doctors about a patient’s risk for TBI. The information is also being stored to do more long-term analysis of the effects of TBI in the hopes of developing better treatment and better protective equipment in the future.

The TBI sensors are part of a wider trend in western armies aimed at fielding military gear and clothing equipped with electronic devices capable of monitoring things like respiration, heart rate and skin temperature. These can also help identify the locations and extent of impact wounds by sensing any damage to the fabric of soldiers’ uniforms.

For doctors treating patients exposed to blasts, the sensors take some of the guess work out of diagnosing TBI. While a sensor reading on its own is not a diagnosis, it can tell doctors the amount of force a servicemember experienced, as opposed to relying on troops who have recently experienced a traumatic event to describe what happened.

In the early days of the wars in Iraq and Afghanistan, little was understood about the effects of concussions, and untold number of troops kept fighting even after having suffered multiple head injuries. Not only did this put troops at risk of serious long-term medical consequences, it would eventually take some out of the fight who would have otherwise been able to return to duty had they received prompt care, said Col. David Wilkie, an Army neurologist and the theater neurology consultant for Task Force Med-A, which is responsible for U.S. forces’ medical care throughout Afghanistan.

“Prior to 2009, we were finding a lot of soldiers trying to drive on,” he said. “Their symptoms would get worse, they would get more concussions and some had to be (medically evacuated). Unfortunately, some of those soldiers went on to have chronic symptoms that they might not have if they had proper treatment.”

Now, because of better understanding of TBI and better treatment, roughly 95 percent of troops who suffer a TBI downrange are able to return to duty, rather than being evacuated, Wilkie said.

“No soldier goes back to duty until they’ve been tested and show they can handle the stress,” he said.

The benefits of the sensors can be seen at Bagram Air Field, north of Kabul, inside the khaki, foam-roofed huts of the Concussion Specialty Care Center that Wilkie oversees, which feels like a world away from the war still being fought just outside the base gates.

Soft lighting and cushy leather chairs make the center’s lounge one of the most relaxing rooms on any base in Afghanistan, and that’s the point: it’s an oasis for troops recovering from traumatic brain injuries, for which the best medicine is often rest.

“It’s great here — you forget you are in Afghanistan,” said Senior Airman Mike Hansen, 31, who along with four Air Force comrades was recuperating in the center after their convoy was attacked by a suicide bomber just outside of Bagram Air Field in October.

On a late fall day, Hansen and three other airmen sat in the concussion center chatting just days after the attack that injured them. The airmen were doing a security patrol outside the base when a man on a motorcycle strapped with explosives sped toward their armored truck before detonating. After a few days of relaxation and physical therapy at the concussion center, all were hoping to get back to duty soon.

Since January 2011, roughly 4,400 patients have been admitted to the concussion center.

“It’s a rehabilitation environment, so there’s an expectation of getting better,” Wilkie said. “You don’t want to create the thinking, ‘I need medicine, I need a procedure done.’”

There’s still a long way to go in understanding TBI and its effects, but the sensors are helping researchers and doctors make progress, Surgeon General of the Army’s TBI Director Stephanie Maxfield Panker said.

“We still have a gap in terms of having more objective data about blast pressures and accelerations folks are experiencing out there,” she said. “There’s lots we don’t know about blast effects on the human brain and body and I think this is where (sensors) come into play.”