With handouts and grants, troops hope to help slum 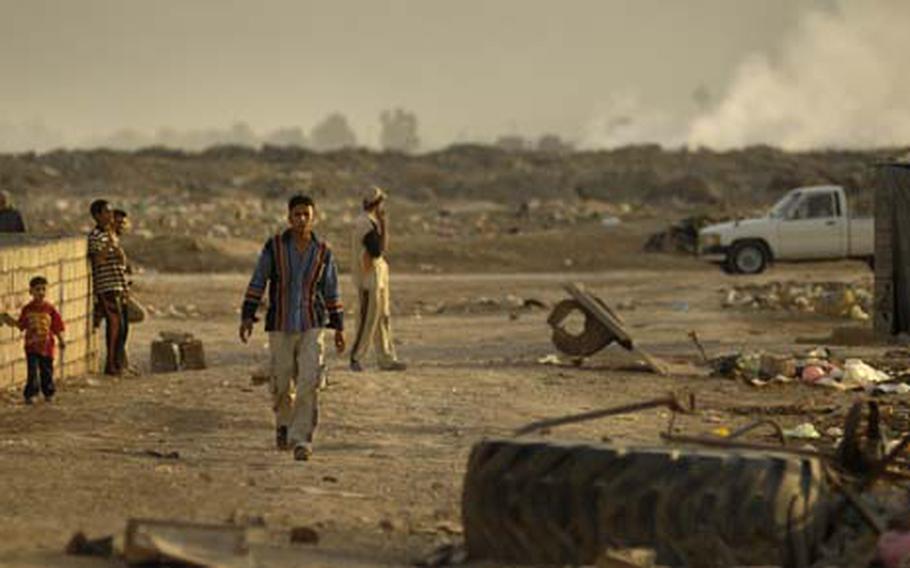 Residents of Shawra Wa Um Jidr live among trash-littered fields accented by smoke. Soldiers from Company B of the 82nd Airborne Division&#39;s 2nd Battalion, 505th Parachute Infantry Regiment, are taking on the task of helping the destitute area that has historically been neglected by the capital city. (Ben Bloker / S&S)

Raggedy, mud-stained sheep and cattle &#8212; shepherded by the destitute &#8212; graze on endless acres of refuse in a wasteland that has long served as Baghdad&#8217;s landfill. Curling smoke signals trash fires that speckle the sprawling garbage dump. Human scavengers scour the heaps, searching for anything of use.

Soldiers with the 82nd Airborne Division&#8217;s 2nd Battalion, 505th Parachute Infantry Regiment &#8212; alongside Iraqi and other U.S. institutions &#8212; aim to improve the lot of residents in the area known in military parlance as the "SUJ."

U.S. soldiers with the Iraqi National Police have given away blankets and school supplies. Road-paving and street-lighting projects are in the works. A water project should begin soon and sewer repairs should start in August. Donations for the needy in the area are pouring in from around the States in part thanks to a touching video put together by the 2nd Battalion, 505th Parachute Infantry Regiment.

The area has suffered neglect dating back to Saddam Hussein&#8217;s reign. Late last week, the soldiers out of Fort Bragg, N.C., donated medical supplies and worked with local leaders on requests for microgrants, which would give business owners a few thousand dollars each.

On Thursday evening, 1st Lt. Brandon Knox, a platoon leader in the battalion&#8217;s Company B, patiently dealt with local leaders who seemed to be trying to work the microgrant system. Ali Hussein showed Knox the necessary paperwork for several requests for microgrants. Hussein said that the most important requests were on the top, including those for his family members.

Knox asked Hussein if the businesses were nearby, because he had to verify that the microgrant applicants were actual business owners. At first, Hussein said they could not visit the businesses that day. But later in the meeting, he changed course.

The first business the soldiers visited with Hussein was next to their meeting place and consisted of not much more than an empty store the size of a one-car garage. Nonetheless, the soldiers dutifully snapped a picture of the person said to be the business owner standing at his storefront.

"The thing he has to understand is they have to be business owners," Knox told his interpreter. "We just can&#8217;t give (microgrants) to families."

The interpreter was aware of how such an explanation would be received.

"Even if I try to explain it to him, he&#8217;s not going to understand, sir," the interpreter replied to Knox.

Following an exchange with Muhammed, the interpreter told Knox that Muhammed said that if he gets a lot of money, he&#8217;ll give it to children and the poor to help them.

As darkness fell, U.S. and Iraqi soldiers conducted a walking patrol in the SUJ.

"What we&#8217;re trying to do now is teach them our troop-leading procedures, watch to see how they do it and see if we can offer any assistance," said Staff Sgt. Christopher Landry. "Everything we&#8217;re doing now is Iraqi-led. They lead out on patrols. They pick all the targets. From when I was here last time (in 2003 and 2004), they&#8217;ve grown by leaps and bounds."

U.S. soldiers provided security as Iraqi soldiers entered homes. Iraqi soldiers detained two individuals during the patrol &#8212; one for carrying a pistol and the other after he angrily and incessantly accused the Iraqi soldiers of stealing things when they entered his home.