With dumps full, Gricignano trash has no place to go 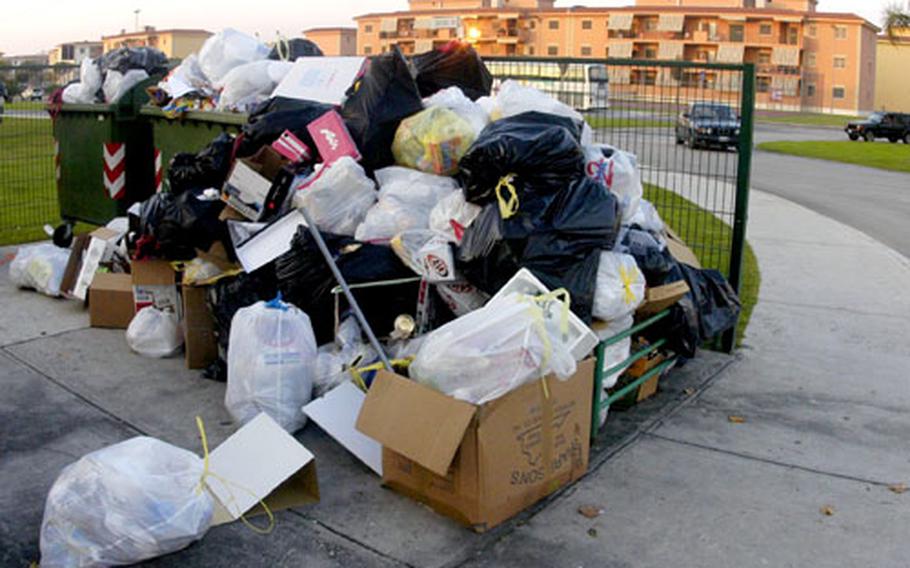 The Campania region of Italy, home to the U.S. Navy’s support site base at Gricignano, is once again in the midst of a garbage crisis. (Sandra Jontz / S&S)

And of late, they smell it too.

Once again, the Campania region of Italy is in the midst of a trash crisis. Local landfills are packed to the brim, and with no place to dump the refuse and cost-prohibitive tabs to truck the garbage to Germany, the garbage sits, spilling out of bins and littering the streets. In some areas, the trash blocks roads.

The crisis has affected the U.S. Navy support site housing complex at Gricignano, as is evident by the overflowing bins.

&#8220;The trash is piling up and unfortunately cats are digging into the plastic/paper bags laying outside the Dumpsters and that has caused the bag contents to start spreading with the wind,&#8221; said base housing resident Lt. Cmdr. Arthur Coogan. &#8220;I know soon we will have rats, and that will be a huge problem.

GMC, a local company, collects whatever trash it can, but if there is no place to take it, it sits on the base, said Linda Crusing, housing director.

In roughly a week or so, a closed dump site in the Aversa vicinity will reopen temporarily until Italian authorities can work out the issues, Crusing said. In the meantime, residents are asked to recycle as much as possible and tie shut garbage bags in an effort to help keep out animals, Crusing said.

Through local providers, the base recycles plastics, aluminum, glass and white paper, collected Thursdays. &#8220;Wet trash,&#8221; or kitchen waste such as food products, is supposed to be collected on Mondays, Wednesdays and Fridays. Other garbage is collected on Tuesdays and Saturdays.

The crisis has struck the entire Campania region, about the size of the state of Illinois. The region has seven landfills, all full.

Local residents burn the trash right in the streets, and Tuesday, angry mobs attacked police in streets overrun by rubbish, according to AGI, an Italian news wire service.

Tuesday night, Italian firefighters responded to more than 100 trash fires. In one part of the city, police flanked firemen, and some Neapolitans attacked officers trying to restore public order. Only the arrival of garbage trucks in the city calmed the situation down, AGI reported.

Some garbage from Campania had been routinely trucked to Germany, where it was incinerated. But this is costly. In trying to remedy the garbage crisis, local officials are searching for other dump sites, in and out of Italy. Local opposition repeatedly has prevented officials from either opening landfills in nearby towns or building an incinerator.

Although the region has a recycling program, the recycling bins are often crammed with garbage.

Base housing officials have logged no incidents related to pests or rodents as a result of the piled garbage, Cruising said. If anyone should see rodents, they are asked to call the Housing Trouble Desk at DSN 629-4285.