With drop in battle-wounded troops, Landstuhl may treat family, retirees 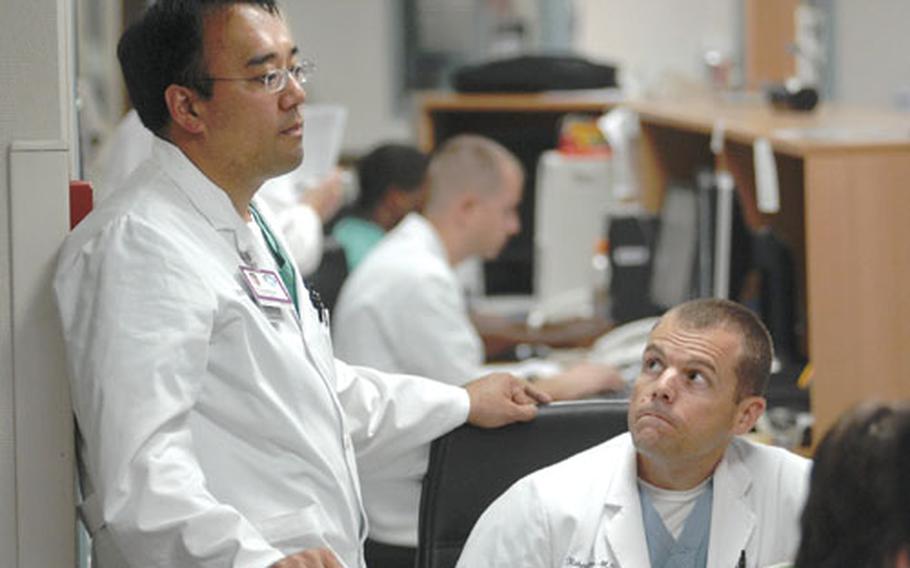 LANDSTUHL, Germany &#8212; Landstuhl Regional Medical Center could soon begin treating more family members and retirees thanks to a drop in the number of battle-injured troops coming through its doors. Attacks against coalition troops in Iraq are down as much as 80 percent since last June, meaning fewer troops being treated at the facility in southwest Germany. The number of inpatient troops has fallen 33 percent.

"The amount of severely injured people that we&#8217;re getting back is significantly less," said Col. Brian Lein, Landstuhl commander. The decline has the hospital considering treating more family members, retirees and the like in some clinics and areas now limited to war-wounded and active-duty military. If enacted, dependents, retirees, etc., would be able to receive treatment at Landstuhl instead of being referred to German hospitals.

As a result of the downturn in patients, the annual contingent of Navy reservists at the hospital will be reduced by about 50 sailors when the new crew arrives this fall. Since the fall of 2006, about 350 Navy reservists have served yearlong tours at Landstuhl, Lein said. Walter Reed Army Medical Center, which receives its war wounded from Landstuhl, is not changing care patterns because its incoming wounded are still keeping the Washington, D.C., hospital to its warrior care mission.

"Air evac numbers dipped slightly below average in May 2008 but have returned to previous rate," said Col. Dennis Doyle, Walter Reed&#8217;s deputy commander for administration. "Soldiers coming from (Operation Iraqi Freedom/Operation Enduring Freedom) have been at or slightly above the average, so no change in care pattern here."

While the number of inpatients has dropped significantly at Landstuhl since the fall, the hospital&#8217;s overall volume of war patients has only fallen slightly. That&#8217;s because a majority of the war-wounded are outpatients suffering from non-battle injuries such as chest pains and back problems.

In June 2007, Landstuhl saw roughly 300 inpatients and about 900 outpatients from Iraq and Afghanistan. In March 2008, Landstuhl received around 200 inpatients and nearly 800 outpatients from the wars. "It comes and goes in spurts," said Lein last Thursday. "Three days ago, our (intensive care unit) census was three. Today, our ICU census after the plane lands is going to be 16. Now it&#8217;s not all battle injuries&#8230;. We still have the surges, and we still have to prepare for and take care of the surges of what comes from downrange."

Last month during one 72-hour stretch, seven medical evacuation planes arrived at nearby Ramstein Air Base, delivering 120 patients to Landstuhl with 18 heading to the ICU, Lein said.

"Two days later, nobody&#8217;s coming in on the planes because the attacks are down," he said. Lein added that over the past couple months Landstuhl is treating more battle wounded from Afghanistan than from Iraq.

Once the normal summer moving season settles, Landstuhl will re-examine some of the hospital clinics and areas that were formally open to only war-wounded and active-duty patients. If the war patient volume is down enough, and enough providers and support staff are on hand, the hospital may open those clinics to other ID cardholders, Lein said.

"Whereas a year and a half ago, orthopedic surgeons were in the operating room taking care of these badly injured people, now they may have some more time on their hands, which will allow us to open up the doors a little bit for people coming in," Lein said.