With Cornyn satisfied, Welsh is confirmed as AF chief of staff 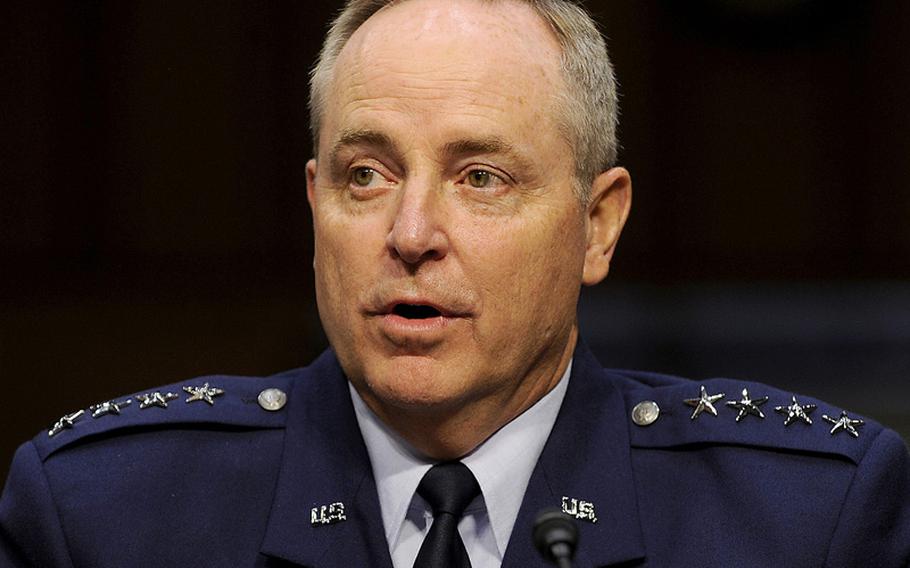 Gen. Mark A. Welsh III, the commander of U.S. Air Forces in Europe, testifies before the Senate Armed Services Committee in Washington, D.C., on July 19, 2012, as part of the confirmation process to serve as the 20th Air Force Chief of Staff. (Scott M. Ash/US Air Force)

WASHINGTON &mdash; Gen. Mark Welsh was confirmed as Air Force chief of staff by the Senate Thursday night, hours after a Texas senator dropped his opposition to the promotion.

Welsh will take over as chief of staff at an Aug. 10 change of command ceremony. Sen. John Cornyn, R-Texas, had put a hold on Welsh&rsquo;s promotion last week because of lingering concerns he had with the service&rsquo;s handling of the Lackland Air Force Base sex assault scandal, where at least 38 female recruits have reported being sexually assaulted by instructors.

On Thursday, after a face-to-face meeting with Welsh, Cornyn said he would allow the confirmation to proceed.

&ldquo;After today it&rsquo;s clear Gen. Welsh shares my grave concerns over the situation at Lackland, and I was pleased to hear his commitment to following the investigation, wherever it may lead,&rdquo; Cornyn said in a statement. &ldquo;Gen. Welsh demonstrated a genuine resolve to improving Air Force-wide policies to prevent a recurrence of the grossly unacceptable conduct that took place at Lackland.&rdquo;

Last month, during a hearing before the Senate Armed Services Committee, Welsh said that the Air Force&rsquo;s effort to prevent sexual assaults &ldquo;is not working.&rdquo;

&ldquo;Everyone is trying to do the right thing and figure out some way of stopping this, but the fact is we have not. In fact, we have not even reversed the trend,&rdquo; he said. &ldquo;The one thing none of us have figured out how to do is stop the perpetrator before the crime.&rdquo;

Welsh, the outgoing commander of U.S. Air Forces in Europe, promised in his new role to look into better training and harsher punishments for offenders.

Last month, former Lackland instructor Staff Sgt. Luis Walker was sentenced to 20 years in prison after he was convicted of 28 charges, including rape and sexual assault. So far, two other instructors have been court-martialed, and four more are awaiting formal charges. One more received nonjudicial punishment, and seven more are still under investigation.

Cornyn&rsquo;s office said Welsh also agreed to conduct a review of the organizational structure of basic training units at Lackland, focusing on the ratio of officers to trainees there, and to keep the senator informed of the investigation.

Rep. Jackie Speier, D-Calif., said after the meeting that she wants to see a public hearing about what happened at the base. &ldquo;The public has the right to know and the victims have the right to know.&rdquo;

She called the investigation so far inadequate and added that she is &ldquo;deeply troubled&rdquo; by the fact that training instructors who had inappropriate relationships with trainees were not immediately fired. Speier called for the military to start taking the issue of sexual assault more seriously.

&ldquo;I&rsquo;m tired of the lip service,&rdquo; she said, adding that the only way to see real change is &ldquo;by having heads roll.&rdquo;

In a joint statement, committee chairman Rep. Buck McKeon, R-Calif., and ranking member Rep. Adam Smith, D-Wash., said responded to criticism that they have not yet held an open hearing on the scandal.

&ldquo;In sensitive cases such as these, open hearings can jeopardize ongoing prosecutions and investigations,&rdquo; they said. &ldquo;This is another step in our long-standing oversight of this issue. It is by no means the final step. We will continue to follow this important issue very closely.&rdquo;

Jennifer Hlad contributed to this story.