With chaos one mortar away, Balad drills for mass casualties 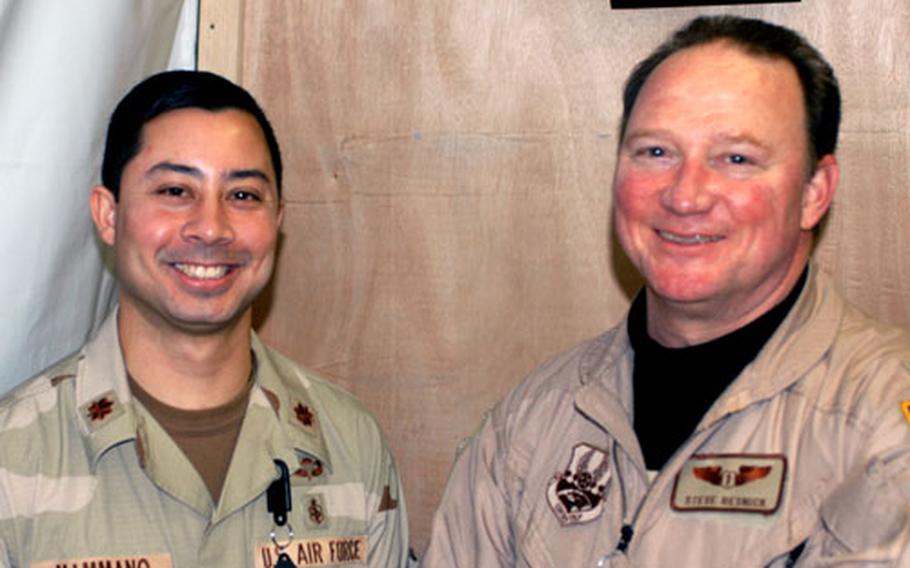 Dr. (Col.) Martin Christenson, who helped plan the mass casualty drill at Balad Air Base in Iraq, has had a long interest in trauma care. In Nebraska, he organized an emergency response drill where the town mayor pretended to have a heart attack. (Nancy Montgomery / S&S)

Somewhere inside the wire, a mortar generally hits a couple of times a week, making Balad among the most heavily mortared bases in Iraq.

One of them about a month ago cost a sergeant his eyesight. But all in all, soldiers and airmen here have been lucky. No one at Balad has been killed by a mortar in two years.

But Lt. Col. Sharon Duffy, deputy commander of the 3rd Corps Support Command, which is responsible for the operation of Logistics Support Area Anaconda, the largest Army supply center in Iraq, said, &#8220;Complacency is the worst enemy of anybody on an FOB.&#8221;

That was where the command&#8217;s medical adviser, Dr. (Col.) Martin Christenson, came in. A family practice doctor in South Dakota before he was called to active duty, Christenson has had a longtime interest in trauma care.

When severe trauma injuries occur, &#8220;the key is getting to the operating table,&#8221; Christenson said.

Quicker evacuations to surgery and a push for more sophisticated lifesaving techniques out to the field have been credited with saving many lives in Iraq. But there&#8217;s always room for improvement, Christenson said.

Last week, as the Iraq &#8220;outside the wire&#8221; was convulsed by a wave of sectarian killings that left some 200 Iraqis dead, Christenson oversaw a drill for another kind of mass casualty.

Christenson and others involved in the planning decided to practice a quick response to a catastrophe inside the base &#8212; in particular, a mortar hitting a dining hall, killing and injuring a score of people.

There was already one easy part.

A similar scenario was all too real in a dining hall near Mosul in December 2004, although it was a suicide bomber, not a mortar, who killed 22 people.

And Balad&#8217;s hospital has had experience in dealing with real mass casualties. Last August, more than 30 Iraqis arrived after an explosion.

Last month, 17 Iraqi army soldiers were taken all at once to the hospital for treatment, and Christenson said, &#8220;the hospital did very well with that.&#8221;

With mass casualties, confusion can mean that critical patients are overlooked while those who can wait and those for whom it&#8217;s already too late are treated, said Air Force Maj. Steve Resnick, who approves patients for flights out of Balad to Germany and Kuwait.

Critical patients usually make up about 40 percent of the total in a mass casualty situation, he said, and triage &#8212; sorting out who needs treatment first &#8212; is primary.

So the hospital, already proficient at saving lives on the operating table, was enthusiastic about participating in the drill.

On the day of the drill, Spc. Christopher Taylor lay comfortably on his back on the mess tent floor, with his left leg draped over an overturned chair and his right shoulder smeared with fake blood to simulate his minor wound. Taylor had volunteered to play a victim in the exercise, he said, for &#8220;something to do. Something different.&#8221;

The exercise had been in the planning stages for months and gave Christenson a chance to check not only on coordinating a rapid, effective response, but also a number of his initiatives, such as combat lifesaver class and a new, more sophisticated first-aid kit he hopes to make widely available.

If more people knew first aid and had better kits to stop bleeding and keep people breathing, Christenson said, 15 percent of people who die from trauma could be saved.