With an eye toward unity, South Korea unveils new bike trail near DMZ 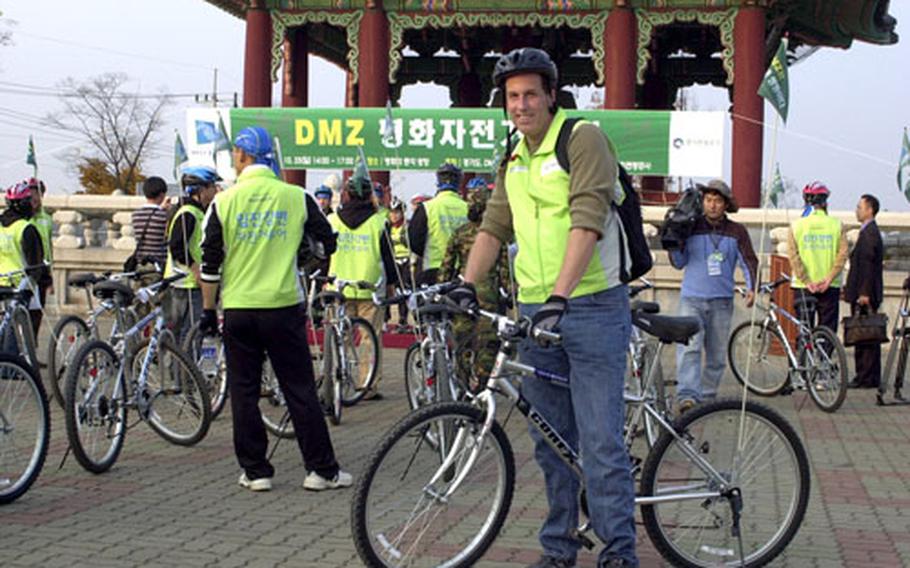 Stars and Stripes reporter Jon Rabiroff was among 100 media members, government officials and celebrities who were given a sneak peek at a new bike trail officials hope to open next year just south of the Demilitarized Zone in Korea. (Special to Stripes)

Stars and Stripes reporter Jon Rabiroff was among 100 media members, government officials and celebrities who were given a sneak peek at a new bike trail officials hope to open next year just south of the Demilitarized Zone in Korea. (Special to Stripes) 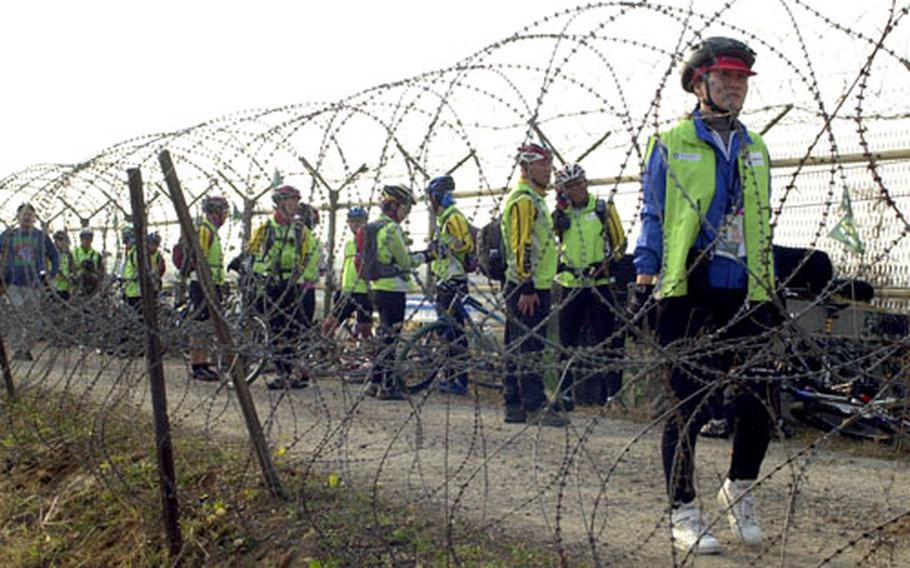 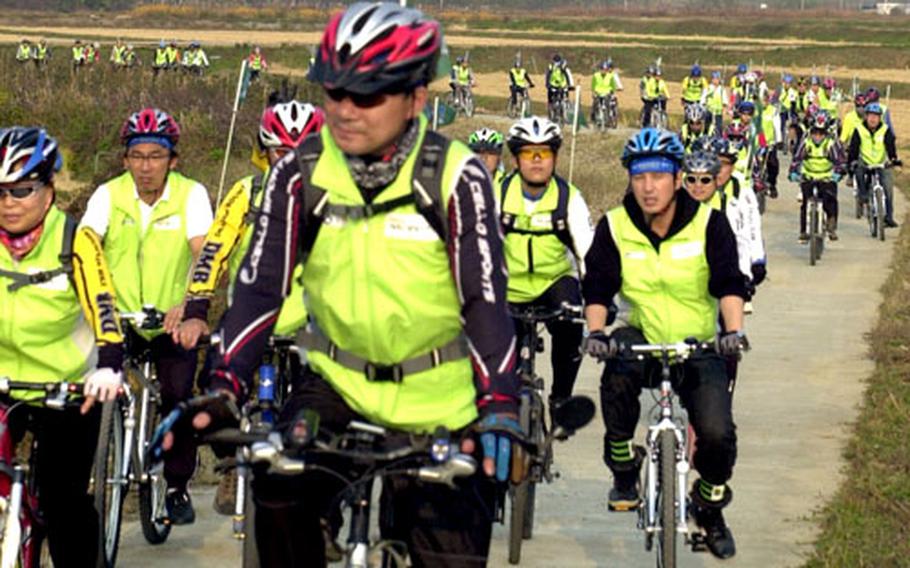 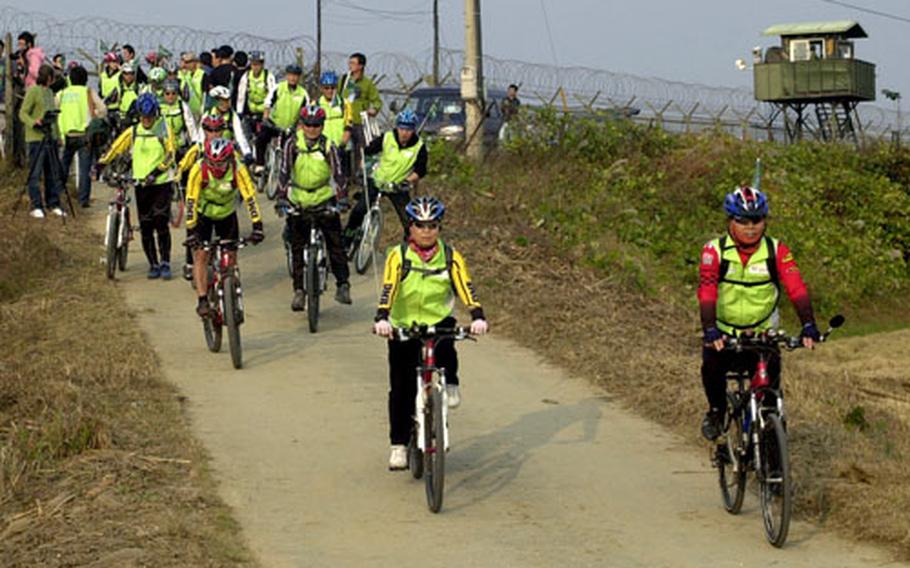 NEAR THE DEMILITARIZED ZONE, Korea &#8212; It was the chance of a lifetime, to ride on a new bicycle trail through an area that has been shut off from most of mankind for decades.

The ride was filled with memorable sights. There was the river we crossed, unmarred by boat or fisherman. There was the relatively flat terrain, absent any houses. And, in the distance in every direction you looked, there were postcard-worthy views of the mountains. This truly would be a nature-lover&#8217;s paradise, were it not for the armed soldiers, the guard towers and all the barbed wire.

Oh, did I mention I was riding just south of Korea&#8217;s Demilitarized Zone, an area former President Bill Clinton once called &#8220;the scariest place on earth?&#8221;

I was one of 100 people who recently took part in&#65279; the DMZ Peace Bike March &#8212; a ride meant to preview a recently developed trail in an area off limits to most civilians since Korean War hostilities ended in 1953.

Officials hope to open the trail along the Civilian Control Line &#8212; east and west of the Unification Bridge &#8212; early next year on a limited basis with an eye toward promoting exercise, tourism and the idea of an eventual reunification of the peninsula.

To be clear, the only real danger on this nine-mile bike trail is that you will pull a muscle while pedaling or wipe out on one of the small-but-steep hills along the way.

Yes, you have to pass through a military checkpoint to get onto the trail, but the CCL is a good five miles south of the actual DMZ and the sight of the sometimes unpredictable soldiers of North Korea.

So, no, the new bike path does not go through any mine fields, and there is no need to speed up in fear of enemy snipers.

After a few enthusiastic speeches, the Peace Bike March began with government officials, members of the media and celebrities riding through a checkpoint and along the CCL and the Imjin River.

With the river and wetlands visible in the distance, we rode through a corridor between fences topped by barbed wire on both sides until we reached the Unification Bridge. After a back-and-forth across the bridge, we were back riding in another barbed-wire corridor, before turning back toward our starting point and a ride through rice paddies, one of the few activities allowed in the area.

While details are still being worked out, officials hope by March to open up the trail twice a month for as many as 300 riders. Bicyclists would pay a small fee and be subject to an identity check before being allowed into the trail area, which will continue to be under the control of South Korea&#8217;s Ministry of National Defense. Plans call for another 6-mile section of the bike trail to open in the near future.

Why open a bike trail so close to the DMZ in the face of so many logistical issues?

&#8220;It aims at promoting a wish for peace &#8230; and hoping for unification and appreciating the great nature preserved so well at the DMZ,&#8221; said Han Young-ryeol, an official with the Gyeonggi Provincial Office.

As someone who has visited the DMZ a half-dozen times, I found something liberating about the mood of the event. Camera crews freely shot video of checkpoints and guard posts, where cameras are usually prohibited. And armed soldiers famous at the DMZ for their stony countenances were happily directing bicyclists along the route.

I was having one of those rare, I-can&#8217;t-believe-I-get-to-do-this moments. Guns. Bikes. Riding in an area closed to most of the world for the past half-century. Cool.

That was, until about halfway through the ride, when a Korean man rolled up alongside me and started chatting.

&#8220;This makes me sad,&#8221; he said, adding he thought the day was a cause more for reflection than celebration.

It is disappointing, he said, that decades after the fighting of the Korean War stopped, the peninsula is still divided by the barbed-wire fences and armed guards of the DMZ, and you need special permission to take a simple bike ride in such a beautiful area.

After telling me how much he hopes the two Koreas ultimately reunite, my bicycling companion &#8212; who identified himself as a &#8220;broadcaster&#8221; and a &#8220;celebrity&#8221; during our nameless, occupation-only introduction to one another &#8212; bid me farewell.

I did, but with a greater understanding of how, for some, the development of a simple bike trail in the country might someday be a path to a much more important destination.