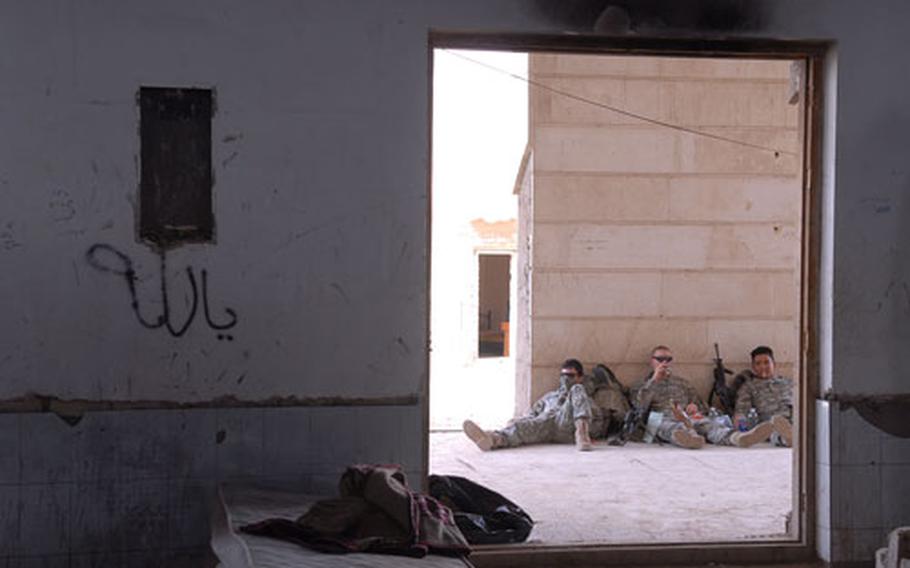 Pfc. Felix Garcia (right), Pvt. Ivan Macias (center) and an interpreter relax outside an Iraqi Army compound during a break from manning an observation position Wednesday in the Shula neighborhood of Baghdad. The area remained quiet to despite expectations of violence following clashes between the Iraqi government and Muqtada al-Sadr’s Mahdi Army. (James Warden / S&S)

Pfc. Felix Garcia (right), Pvt. Ivan Macias (center) and an interpreter relax outside an Iraqi Army compound during a break from manning an observation position Wednesday in the Shula neighborhood of Baghdad. The area remained quiet to despite expectations of violence following clashes between the Iraqi government and Muqtada al-Sadr’s Mahdi Army. (James Warden / S&S) 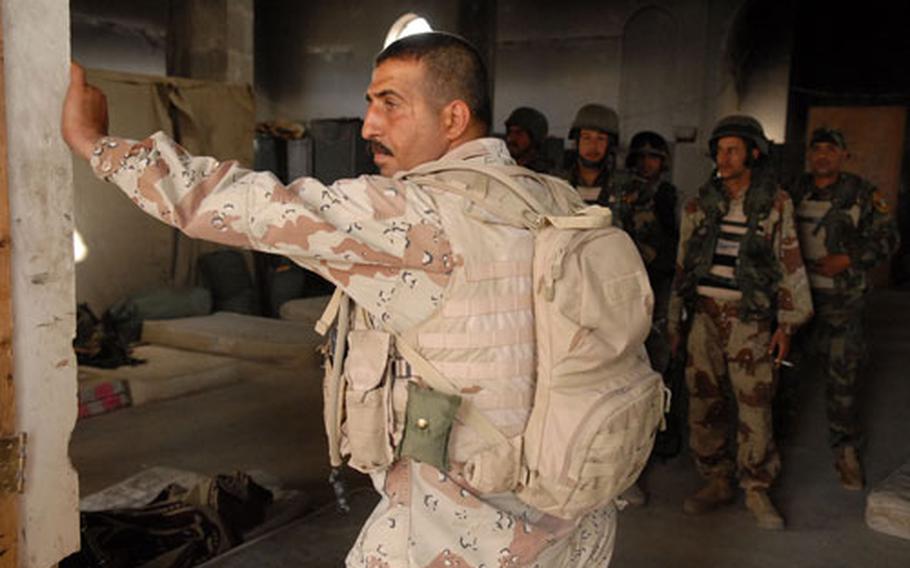 Iraqi Army Sgt. Gheni Suher waits in an Iraqi Army compound for his soldiers to gather for a mission Wednesday in the Shula area of Baghdad. (James Warden / S&S)

BAGHDAD &#8212; The Shiite stronghold of Shula remained quiet Wednesday despite tensions still in place after radical cleric Muqtada al-Sadr&#8217;s last minute decision to call off a march by his followers in Baghdad.

Al-Sadr&#8217;s Mahdi Army militia had originally planned a &#8220;million-man march&#8221; on Najaf, which the Shiite cleric later restricted to Baghdad. He backed off on the march altogether Tuesday, stating that he didn&#8217;t want Iraqi forces to attack his followers &#8212; although he said he would be &#8220;honored&#8221; if American forces would.

Notwithstanding the cancellation, American forces in Iraq had geared up for possible violence such as the attacks that happened at the end of March. A platoon with Company B, which is responsible for Shula, headed to a bridge overlooking the Baghdad neighborhood for a 24-hour stay to back up the local Iraqi army unit.

As of late Wednesday afternoon, though, the view from atop the bridge looked as normal as could be expected for a city with movement restrictions. Children played soccer on a major road. Shepherds herded sheep along a neighboring lane. And workers repaired street lamps in the median.

Pvt. Ivan Macias, a Company B soldier, said the streets did appear a bit quieter than usual, but he attributed that to the curfew in effect for Wednesday, which also marks five years since Baghdad fell to American troops.

Col. Abu Hamrad said he expected a quiet day like Wednesday was turning out to be. Government countermeasures, including the curfew, made it harder for militias to move weapons around the city &#8212; and, thus, harder for them to fight.

While Hamrad said he was &#8220;800 percent&#8221; confident that Shula would remain quiet through the night, the soldiers were more wary since attacks have historically picked up after sunset. Yet they relaxed while daylight remained, taking turns manning the vehicles on the bridge and then resting at a neighboring Iraqi army compound. Many slept or listened to music during the calm.

Second Lt. Jacob Baker couldn&#8217;t explain the quiet that prevailed after American forces had braced for violence. But he did note how Americans soldiers were out in Shula filling out claims for damages and doing humanitarian missions shortly after the violence in March. Shula residents had since been contacting coalition forces on tip lines with information about the attackers.