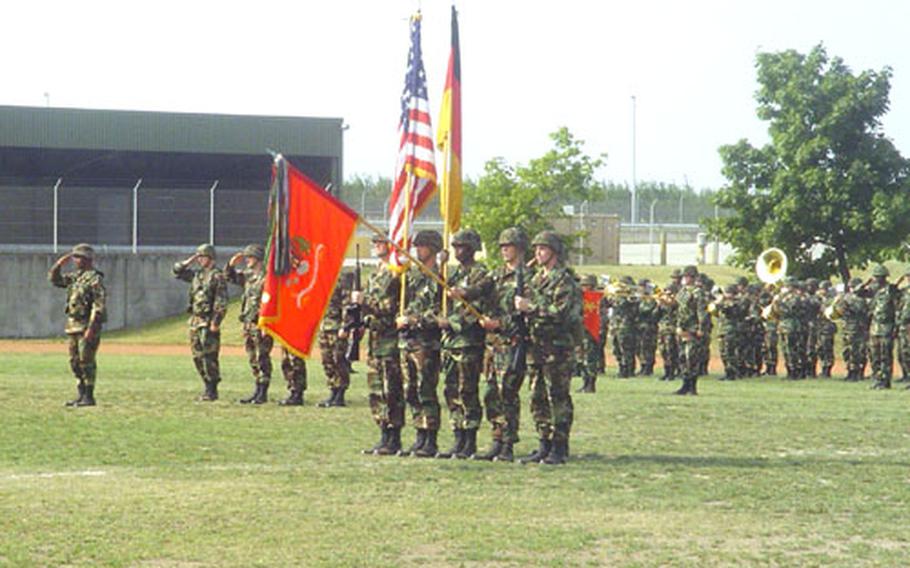 Soldiers from the 1st Battalion, 4th Air Defense Artillery attend an inactivation ceremony for their unit on Wednesday. It is the first air defense battalion to be made inactive as part of the Army&#39;s transformation plans. (Courtesy of U.S. Army)

As suicide bombers and booby traps replace air forces as threats to U.S. troops on the ground, one Stinger missile battalion in Germany is going the way of the Warsaw Pact.

The soldiers of the 1st Battalion, 4th Air Defense Artillery held a farewell ceremony for their unit Wednesday. The Wackernheim, Germany, affair was the first of such farewells in Europe. It will not be the last.

&#8220;The Army is restructuring to meet the future needs of combat and other operations,&#8221; said Maj. Michael Indovina, spokesman for the 1st Armored Division. &#8220;[It&#8217;s] basically balancing out the active and reserve forces, and ADA was one of the areas affected.&#8221;

The Wackernheim battalion will still technically exist until September, but the troops will begin leaving sooner &#8212; some to wield stingers for a new outfit, others to new jobs as military policemen or in other areas with shortages. Making the battalion inactive is part of the Army&#8217;s effort to both bolster its active-duty ranks with more boots and move the boots it does have into the jobs that are most in demand in places like Iraq.

&#8220;It&#8217;s a complete part of the transformation package,&#8221; said the battalion&#8217;s executive officer, Maj. Eric Handy. Some of his soldiers will remain in air defense. Some will wind up in psychological operations, military police or civil affairs units.

The plan, according to the Army, is to take air defense artillery units out of the division structure entirely. The 1st Infantry Division&#8217;s 4th Battalion, 3rd Air Defense Artillery is also set to follow the program when it returns to Germany from Iraq in 2005.

One soldier with the 1-4 said about three-quarters of his fellow soldiers appear to be staying in the air defense business, but the remainder are off to more up-close-and-personal jobs.

And they have experience that&#8217;s as real as it gets: The battalion served a tour in Iraq guarding Baghdad International Airport. They served as cops, scouts and engineers. The unit grew from its normal 450 to 750 as it adopted troops from airborne and cavalry units.

Pulling desert security duty was miles away from targeting enemy aircraft with a lightweight missile that flies at supersonic speed.

&#8220;Actually, it was a good change,&#8221; said Staff Sgt. Gary Marshall. Troops who knew they would be tasked to find new jobs on a permanent basis saw action in the field.

They trained in Germany with weapons and at riot control. They set up mock checkpoints.