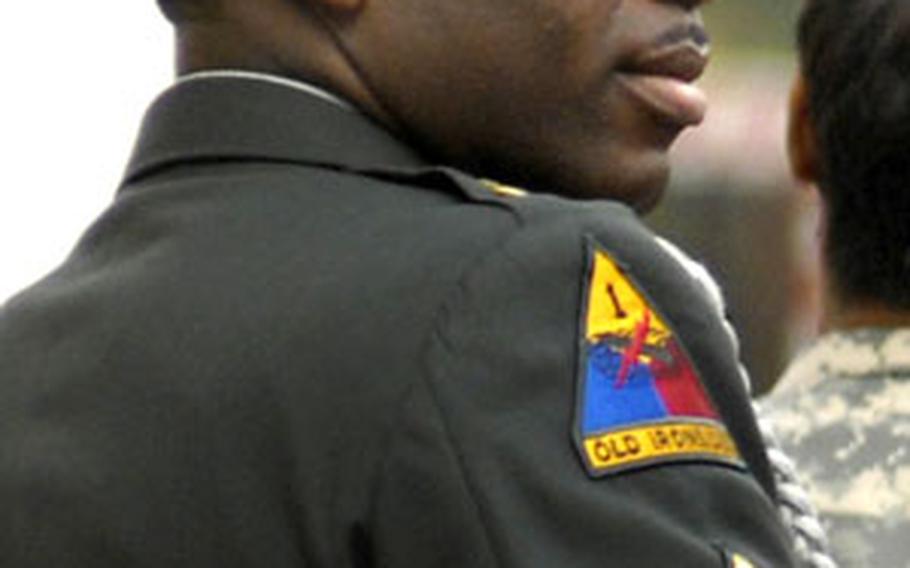 Army Staff Sgt. Alre Hudson leaves for a lunch-time break during the second day of his court-martial Wednesday in Kaiserslautern. (Ben Bloker / S&S)

The information came to light when a document was read aloud Wednesday during the second day of Hudson&#8217;s court-martial. Hudson faces four charges, including involuntary manslaughter, in Johnson&#8217;s death. If convicted on all charges, Hudson could be sentenced to 14 years&#8217; confinement.

Hudson was one of nine men who allegedly struck Johnson during an initiation ceremony for the Gangster Disciples that took place July 3, 2005, according to testimony. Johnson was found dead in his barracks room in Kaiserslautern the following day.

The evidence given at the court-martial that links Hudson to Johnson&#8217;s death and the gang comes from the testimony of Pfc. Latisha Ellis, an eyewitness to the beating who testified for the prosecution.

Based on Ellis&#8217; testimony, Hudson could be identified as a gang member, said gang expert John Bowman, a detective with the Killeen (Texas) Police Department. That Ellis testified Hudson had a Gangster Disciples meeting at his house, was present at Johnson&#8217;s beating and other factors &#8220;would clearly be enough to document (Hudson) as a gang member,&#8221; Bowman testified.

Under cross-examination from defense attorney David Court, Bowman said that, excluding Ellis&#8217; testimony, there was no evidence presented in the court-martial linking Hudson to the Gangster Disciples. Bowman acknowledged to Court that Ellis&#8217; testimony was the basis for his conclusion that Hudson was in the gang.

A few witnesses testified Wednesday about Gangster Disciples graffiti, initiations and jewelry that were seen in Iraq when Johnson&#8217;s unit &#8212; the 66th Transportation Company &#8212; was deployed from 2004 to 2005. On cross-examination from Court, all those witnesses either said that they did not know Hudson or that he was not on the deployment.

Spc. Terance Pope testified that he did not see Hudson at a July 4, 2005, cookout during which suspects in Johnson&#8217;s death allegedly concocted a cover story.

The court-martial is expected to resume Thursday.