Wireless internet access becoming a reality at some Pacific bases 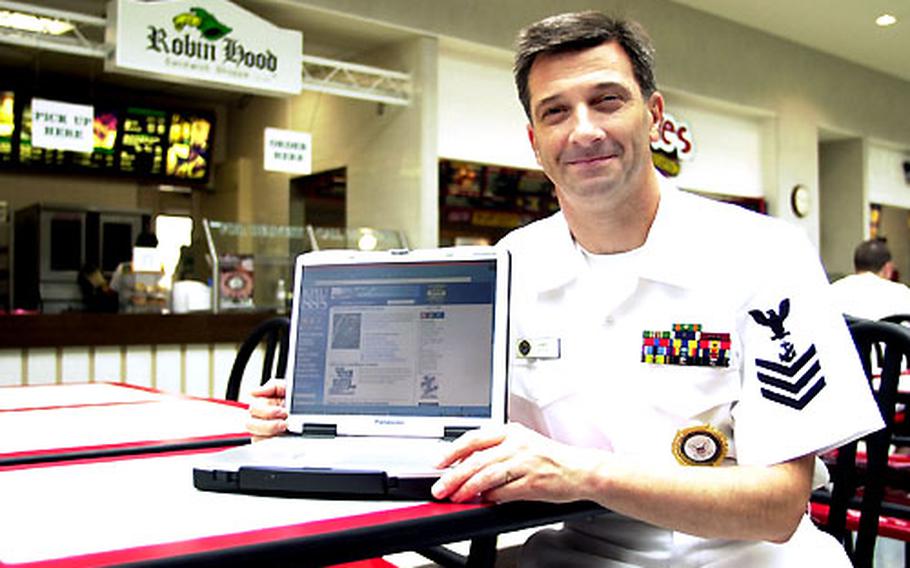 A handful of military bases in Japan are getting what&#8217;s already available at hundreds of coffee shops in Seattle and San Francisco: wireless, high-speed Internet access up to 20 times faster than a dial-up modem.

Wireless Internet is to be installed at all Navy, Air Force and Army bases in Japan and on Okinawa by Sept. 1, said Robert Bailey, JENS military markets department manager. Marine Corps bases on Okinawa and at Camp Fuji currently are not slated to receive the service.

The new technology, called Wireless Fidelity or &#8220;Wi-Fi,&#8221; lets customers use notebook computers to access the Internet at about 11 megabits per second without wires or a modem.

Any nearby computer equipped with a slot for a standard PCMCIA (which stands for Personal Computer Memory Card International Association) Wireless Network card can log on. The signal can go through glass, but not metal or concrete, JENS officials said.

Network cards may be purchased at any Navy, Army or Air Force exchange for $55 to $65. About 10 loaner cards also are available for 24-hour periods at each JENS center, Bailey said.

At each access point, JENS installs a compact, wireless base station served either by a high-speed telephone line or modem, Bailey said.

Customers sign up for the service at JENS&#8217; Personal Telecommunications Center on base.

Until Sept. 1, customers can access the system at a promotional cost of $15 for three hours of Internet time during a single 24-hour period. But at Atsugi, residential customers may use the wireless service for free until about Sept. 1, Bailey said. That&#8217;s because it was installed to relieve chronic busy signals on Atsugi&#8217;s Internet dial-up service.

&#8220;We have maxed out on the number of connections that are possible on the Atsugi switch with dial-up customers,&#8221; he said.

JENS will use 20 extra high-speed telephone lines to create 14 wireless access points at Atsugi, Bailey said. Each point can handle about 43 Internet connections.

Customers will be able to use the wireless J*Spot at any base with an access point by purchasing a prepaid Internet service card from JENS.

They will be available from vending machines to be installed near access centers.

A 30-day card costing $50 will also be available over-the-counter from any JENS outlet, Bailey said. A listing of access hubs at each base will be posted on JENS&#8217; Web site, www.attmil.ne.jp.

JENS wireless Internet is available at the following locations: