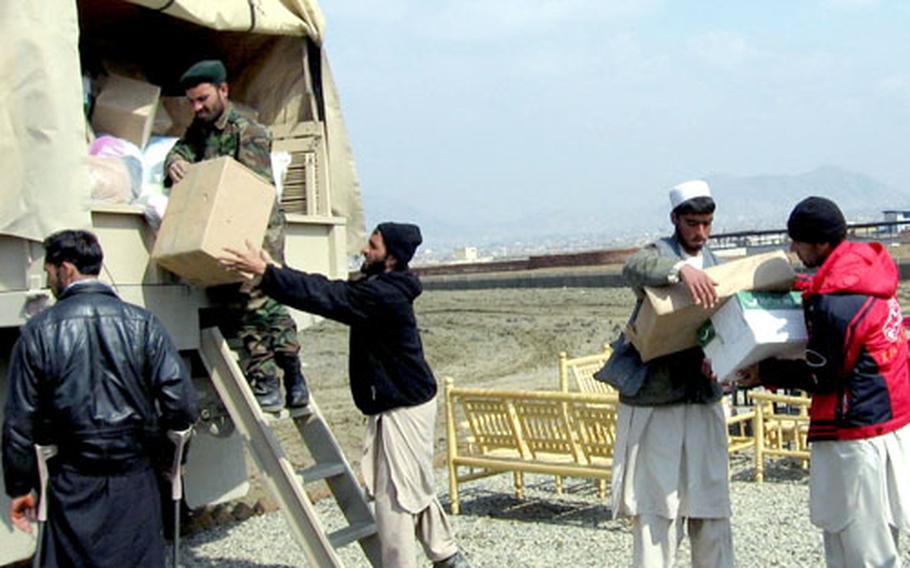 An Afghan National Army soldier helps load a truck with the boxes of donated clothing to distribute to an orphanage in an isolated part of the country about four hours from the base. (Courtesy of Lt. Howard Smith)

An Afghan National Army soldier helps load a truck with the boxes of donated clothing to distribute to an orphanage in an isolated part of the country about four hours from the base. (Courtesy of Lt. Howard Smith) 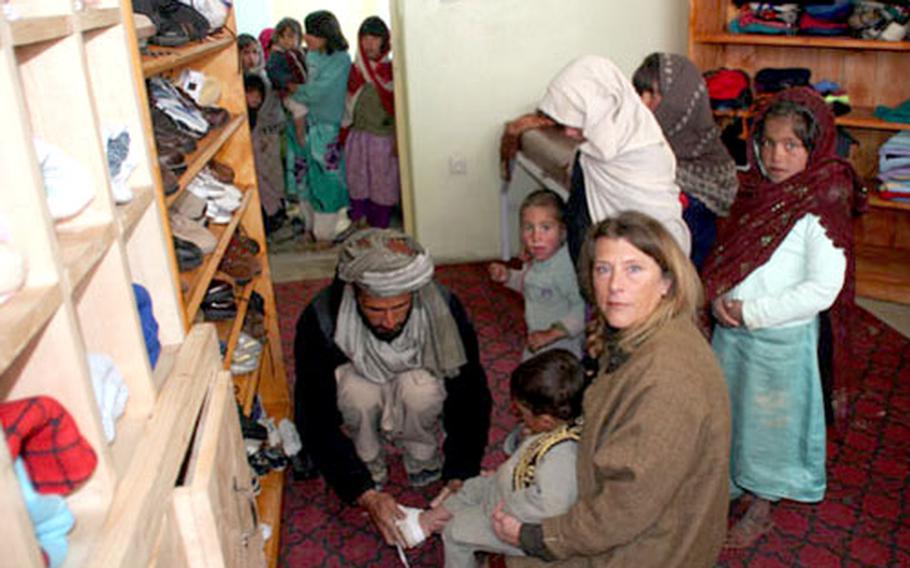 Children at the Wardak Province Orphanage in remote Afghanistan get fitted with shoes. Some of the donated clothes were taken the almost four-hour drive from Camp Phoenix to the orphanage, which is about 9,000-feet high in the mountains. (Courtesy of Lt. Howard Smith) 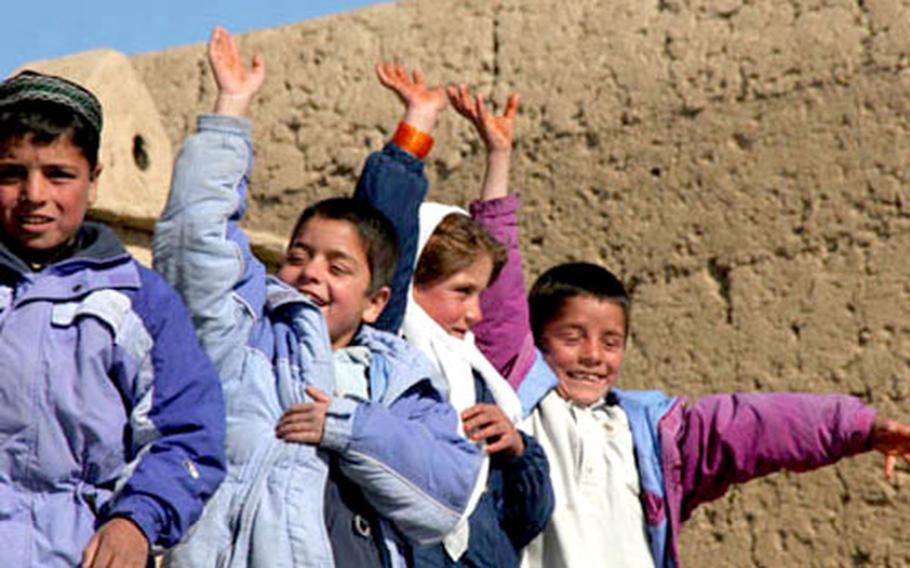 Children at the Wardak Province Orphanage in remote Afghanistan where some of the 500 boxes worth of clothing was distributed. "A lot of Afghanistan&#39;s beauty resides in the rugged geography, but it also fosters a great deal of isolantionism," Lt. Howard Smith said. "It was a great privilege to get out of Kabul adn visit this area where Americans almost never go." (Courtesy of Lt. Howard Smith)

The snow had melted in Kabul.

But at a remote village 9,000 feet up in the mountains of Afghanistan &#8212; past where the pavement runs out &#8212; it was still very much winter, Navy Lt. Howard Smith recalls of a day last February.

The children of Wardak Province Orphanage were lined up in order of size, &#8220;smiling and wearing their new winter coats and shoes. They all had been taught a few words of English, and they were very eager to show it off, saying &#8216;thank you&#8217; in unison with great exuberance,&#8221; he wrote from Afghanistan in an e-mail to Stars and Stripes.

What started out in December as a simple desire to hand out a few pairs of gloves and maybe some shoes to the children outside the gate at Camp Phoenix turned into more than 500 boxes of clothes donated from all over the world.

Smith, who works at U.S. Naval Hospital Okinawa and is currently deployed for a 14-month tour as a facilities engineer with Task Force Phoenix, travels around the Kabul area to assess engineering projects.

&#8220;I was always shocked to see both children and adults in sub-freezing temperatures without shoes, gloves (or) hats,&#8221; he wrote. &#8220;The level of poverty here is simply overwhelming and can only be truly appreciated by seeing it in person.&#8221;

Smith decided he would buy some winter clothing to hand out.

He e-mailed his wife about his plans and asked her to pack up some stuff from home.

Tuyen Smith, a special education teacher at Bob Hope Primary School on Kadena Air Base, e-mailed her friends and family in the States and sent out a schoolwide e-mail about the clothing project.

Word spread to teachers on mainland Japan and Europe and soon 2,000 pounds worth of clothing showed up in Afghanistan. &#8220;The response has been astounding,&#8221; Howard Smith said.

A second-grade class at Ikego Elementary School on Yokosuka Naval Base did a class project on the clothing drive.

&#8220;We got massive donations that filled up our second-grade hallway for a couple of months,&#8221; Ikego teacher Alyce Childers said.

Mayra Seitz, a teacher at Giessen American High School in Germany, heard about the project from a teacher on Okinawa, whom she used to work with in Panama. Students at Giessen high school and middle school collected 35 large boxes and shipped them off in January, Seitz said.

Smith said he has had to enlist the help of some of the Seabees with his unit to sort the clothes by gender, size and type and then allot it for various places, such as impoverished villages and orphanages.

&#8220;I was lucky to have a chance meeting with a [women&#8217;s organization] that has been in place for over 15 years helping the Afghans,&#8221; Smith wrote about those who have assisted with the project. &#8220;I was also fortunate to meet with a local contractor who, though by no means rich himself, dedicated himself to supporting an orphanage in the Kabul area.&#8221;

Smith&#8217;s wife said &#8220;he was really down&#8221; before starting the project. Doing something with such tangible effect on the Afghan people has been a big morale boost for both Smith and the other servicemembers involved, Tuyen said.

But the effect on his morale, Smith said, has been twofold.

&#8220;Certainly it is great to give something to people who have nothing, yet it is not until you get involved that you realize just how large the problem is,&#8221; he wrote in the e-mail.

Smith said he doesn&#8217;t know what will happen to the winter clothing project once he returns to Okinawa in May, but he feels privileged to have visited the remote areas of the country.