Winning them over with flying Elvises: Iwakuni ready for Friendship Day 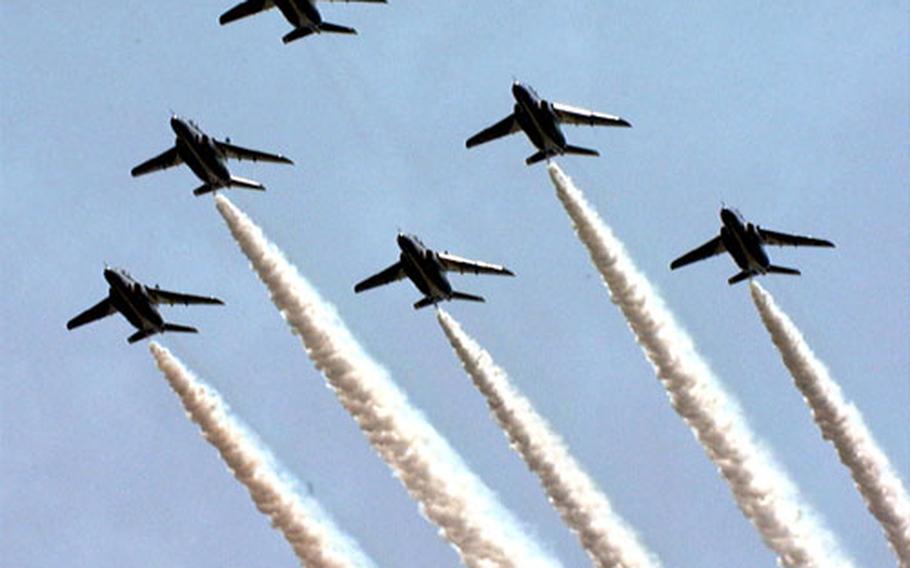 Friendship Day is an opportunity for Americans to host Japanese friends on the base for an air show and plenty of entertainment, base officials say &#8212; including the Ohio-based E Team sky divers, all to be dressed as Elvis Presley as they flutter down to the airfield from about 5,000 feet.

In addition, Elvis impersonator Prentice Chaffin will sing and gyrate on the main stage near the flight line.

Iwakuni&#8217;s Friendship Day is the largest annual event held on base, having drawn up to 267,000 off-post guests as recently as 2000. &#8220;We are expecting a really big crowd and everybody on the air station has a part in the planning and work it takes to pull off such an event,&#8221; said Master Sgt. Lesli Coakley, base spokeswoman. &#8220;It truly is a special day that we designate for the enjoyment of our Japanese friends.&#8221;

Along with various Elvis visages falling from the sky, the air show also plans to feature the popular Japanese aerobatics team Blue Impulse, a repeat performer from past Friendship Days; and Japan&#8217;s Team Deepblues aerobatics team.

Lithuanian aerobatic pilot Jurgis Kairys, a winner of several international flying titles, also will perform. He&#8217;s known for inventing &#8220;several aerobatics maneuvers including the Kairys Wheel, Small Loop and was the first to successfully perform the Cobra maneuver in a propeller-driven aircraft,&#8221; according to the pilot&#8217;s Web site. He also, it states, can &#8220;hover his aircraft like a helicopter.&#8221;

In past years, the American and Japanese static displays have received thousands of visits; this year, spectators will be able to get an up-close look at more than 30 aircraft and military equipment exhibits, officials said.

&#8220;One thing we are stressing is that our guests rely as much as possible on public transportation to get to the main gate because the parking availability is extremely limited,&#8221; Coakley said Monday. &#8220;The city buses will be making runs to the air station entrance and there may be some shuttles running as well.&#8221;

Base officials recommend that visitors refrain from bringing any large bags or containers to the gate, &#8220;because the security examination of the contents slows down the crowd&#8221; waiting to enter the air station, Coakley said. &#8220;Anyone attending Friendship Day is also subject to random searches.&#8221;

Even with precautions, she said, the idea is to show guests a great time and a slice of life on post. Organizers even planned events for children who might not have limited interest in the air show, static display and other activities.

The Sakura Theater is the venue for three Ultraman Shows, at 10 a.m., noon and 2 p.m. In addition, a Kids&#8217; Land (featuring play opportunities and air toys) is to be set up at the Sakura and the air station flight line.

Specific times to be announced.