Winning allegiances to win a war First Lt. Glen Morales, an Air Defense Artillery officer, is flanked by Afghan National Army soldiers as they watch for movement on an opposite mountainside. The forces were in the middle of an ambush that followed a gun battle in an insurgent stronghold northwest of Asadabad, Afghanistan, near the Pakistan border. (Terry Boyd / S&S) A Special Forces medic, left, who requested his name not be published for security concerns, uses a translator to listen to a Kandagal, Afghanistan, elder. The soldier was pressing the man for information concerning anti-government forces in the area. (Terry Boyd / S&S) 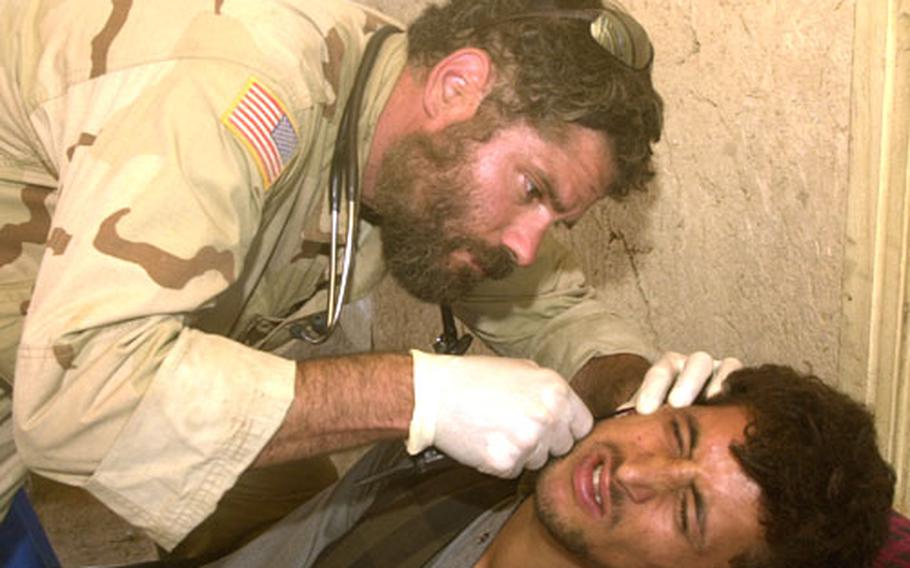 A Special Forces medic, who asked that his full name not be published for security concerns, cuts out an Afgani man&#39;s abcessed boil. The medic and other Special Forces operators, as well as Civil Affairs soldiers, treated dozens of people in the insurgent hotbed of Kandagal, Afghanistan. (Terry Boyd / S&S)

KANDAGAL, Afghanistan &#8212; Oblivious to the gunfire echoing off the steep, rocky slopes, an Afghan Special Forces soldier shook his head and rolled his eyes as he walked between vehicles trapped in the mountain ambush Thursday.

Pushed into the background by ongoing elections, the fight continues for this section of Kunar Province, just a few kilometers from insurgent sanctuaries in Pakistan. Eastern Afghanistan remains a stronghold for forces opposed to Afghan&#8217;s nascent democracy.

But this is not a war where America can send overwhelming force to kill Taliban, al-Qaida and renegade warlords. The &#8220;war&#8221; centers on winning allegiances one village at a time, then extracting intelligence so Special Forces teams can locate and kill insurgents.

Perhaps, due to the nonchalance of soldiers and officers from the 3rd Special Forces Group leading the convoy, the irritated Afghan fighter had gotten the idea the mission &#8212; an impromptu clinic &#8212; would be uneventful.

On Wednesday night, operators at Camp Blessing outside Nangalem were candid with the m&#233;lange of American civilian and military officials from the Asadabad Provincial Reconstruction Team.

As the 15-vehicle convoy &#8212; Americans and Afghani fighters and officials &#8212; approached a chokepoint at about 4,700 feet in the mountains, an American soldier spots a cluster of would-be ambushers on the opposing slope, opening fire at about 9:15 a.m. The ensuing shootout lasts about 15 minutes.

The convoy then moves around the side of the mountain and into an ambush. Insurgents with assault rifles make a major tactical error in engaging the larger, far more heavily armed convoy. Sending down salvos of small-arms fire. In return, they receive small-arms fire punctuated with MK-19 grenades and .50-caliber machine guns. Fighting ends by approximately 9:35 a.m. when Apache attack helicopters arrive. There were no casualties among U.S. or Afghan army units.

The last time soldiers based at Camp Blessing and civil affairs and base officials from Firebase Asadabad held a clinic, it was attacked by insurgents.

A warlord put out a 150,000 Afghan rubel (approximately $3,200) bounty for Americans, said Maj. Jeff McClane, trainer with the 293rd Light Anti-Tank Infantry from Indiana, embedded with the Afghan army. Moreover, the warlord vowed to keep the Americans out of his mountain redoubt, McClane said.

Thursday&#8217;s trek across rivers and up rutted, bolder-strewn roads to isolated Kandagal was the Americans&#8217; way to both defy the warlord, deflating his authority, and to extract intelligence needed to hunt him down.

The clinics are crucial to U.S. intelligence. Medics and civil affairs troops create good will lancing boils and handing out painkillers and vitamins to those few dozen people brave enough &#8212; or desperate enough &#8212; to defy the warlord.

That good will can create good intelligence, which is what the troops are searching for.

Another Special Forces operator tells an elder that the group would like to help them more, but they got ambushed coming up.

Under repeat quizzing, the men admit they know who the insurgents are, but will say no more.

Thursday&#8217;s mission into the mountains proceeded only after a number of last-minute changes and complications that left many in the convoy confused and distracted.

U.S. soldiers, at least, know what they&#8217;re getting into. The night before, Maj. John Wilt, with the 450th Civil Affairs Battalion reservists from Maryland, is drilling one of his soldiers, asking how quickly he can put overwhelming fire on the mountainside.

Sure enough, minutes after a Green Beret notes the convoy is approaching the previous ambush site, a National Guard soldier spots insurgents across the valley and opens up his heavy machine gun.

The convoy, a mishmash of everyone from Afghan fighters to American psy-ops units, fights with confidence unusual in units with no combat experience.

After the clinic, the convoy escapes a return battle by calling on covering fire from A-10s and from Firebase Asadabad artillery.

Overall, it&#8217;s a day of uncertainty. Some believe insurgent units are isolated and impotent in the mountains. Others believe they&#8217;re waiting for election day.

The only thing that is certain is that in this contested area, the insurgents likely can&#8217;t stop the voting, but they still have the willpower to carry on the war.