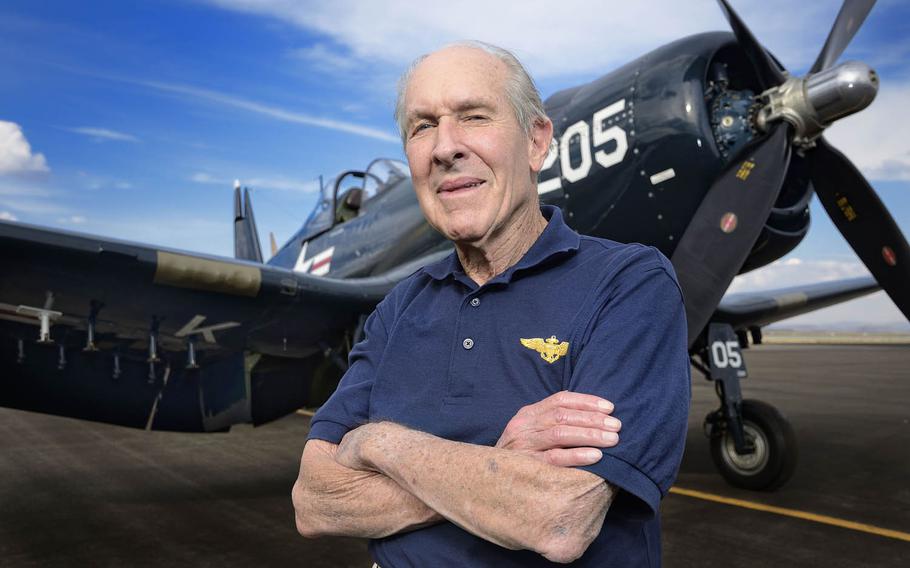 Korean War veteran and Medal of Honor recipient Thomas Hudner stands in front of a vintage Corsair in this undated photo. (Courtesy of Jose Ramos)

Korean War veteran and Medal of Honor recipient Thomas Hudner stands in front of a vintage Corsair in this undated photo. (Courtesy of Jose Ramos) 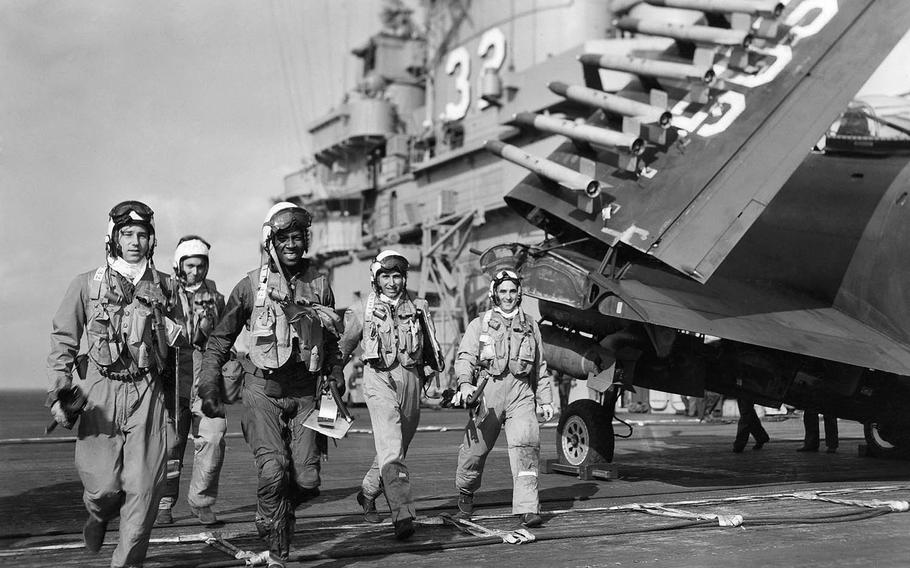 Ensign Jesse L. Brown, the first African-American Navy aviator, walks across the flight deck of the USS Leyte in November 1950, about a month before he was shot down and died in North Korea. (U.S. Navy photo) 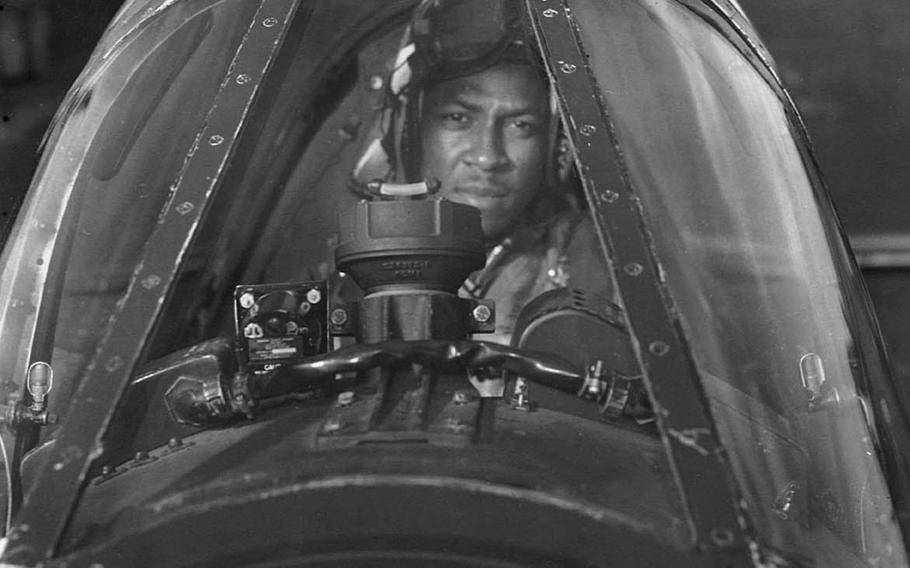 Ensign Jesse L. Brown sits in the cockpit of his Corsair fighter jet in this undated photo. Brown crashed and died on a North Korea mountainside in 1950 during the infamous Battle of Chosin Reservoir. (U.S. Navy photo) 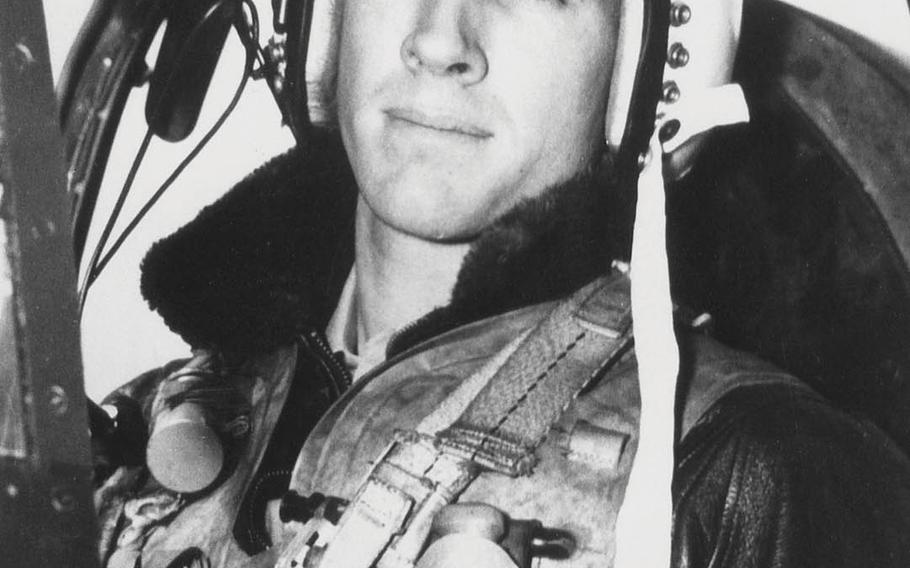 Lt. Thomas Hudner sits inside the cockpit of his Corsairfighter in this undated photo. Hudner, now 91, has requested a ship be named after fellow flyer Jesse Brown, who was among the first blacks to fly in the newly integrated armed forces. (U.S. Navy photo) 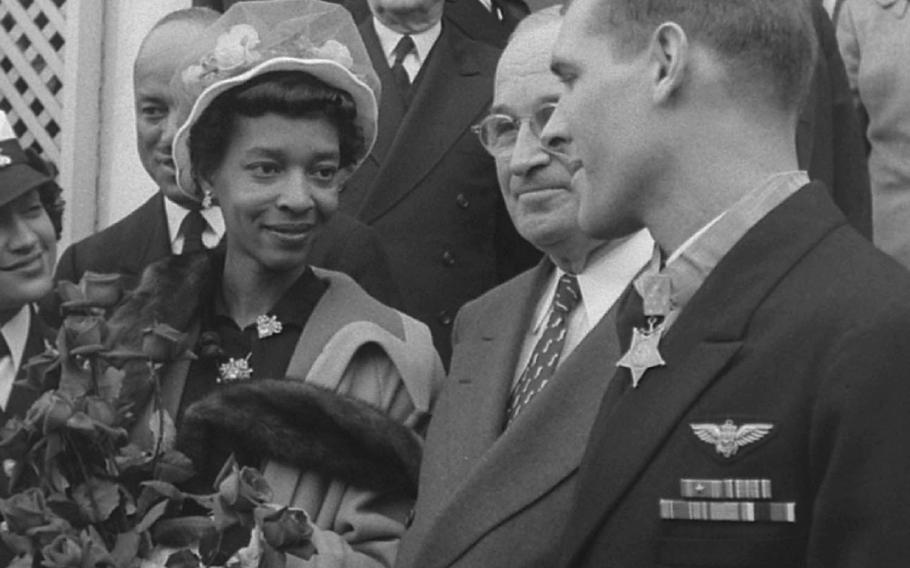 Thomas Hudner, right, stands with President Harry Truman, center, after being awarded the Medal of Honor for his actions in attempting to save the life of fellow Navy pilot Jesse L. Brown. The pilot’s widow, Daisy Brown, stands to Truman’s right. (Courtesy photo)

Earlier this year, 91-year-old Thomas Hudner made a request to Navy Secretary Ray Mabus in a letter imbued with a sense of finality.

“It pains me to ask for any favor, but there is one last cause to which I must attend,” wrote Hudner, a Korean War Navy aviator, Medal of Honor recipient and namesake of a guided-missile destroyer to be commissioned in 2018.

Hudner requested a ship be named after fellow flyer Jesse Brown, the Navy’s first African-American aviator and among the first blacks to fly in the newly integrated armed forces. Brown crashed and died on a North Korea mountainside in 1950 during the infamous Battle of Chosin Reservoir.

Hudner was Brown’s wingman — the aviator who flies slightly behind to protect the lead pilot’s flank. Hudner spent the fleeting minutes after Brown’s crash trying to unpin him from his mangled Corsair fighter that ultimately was his deathtrap.

“I was just the first to act,” Hudner said. “That duty should have fallen to me anyway, as I was his wingman. I couldn’t imagine going back to the carrier and telling the guys that I made no effort to try to save him. It was impossible to just do nothing.”

In one way or another, Hudner, ever the wingman, has spent the past six decades trying to save Brown’s memory and preserve his legacy.

“The uniform brings together people of all backgrounds, but war brings them even closer,” Hudner said. “Before you know it, a comrade is more than a comrade — he’s family.”

Brown was the son of a sharecropper and “had grown up dirt-poor, farming the fields of Mississippi,” according to “Devotion,” a 2015 biography of the two men by Adam Makos.

Far from the other side of the tracks was Hudner, who “had spent his summers boating at a country club in Massachusetts as an heir to a chain of grocery stores,” Makos wrote.

Hudner had been Brown’s wingman for only a few months when they and four other fighters flew from the carrier USS Leyte on Dec. 4, 1950, to support Marines on the ground who were outnumbered and surrounded by Chinese troops. The aviators referred to the enemy below as “White Jackets” because of their camouflage used to blend into the snow cover.

After taking ground fire, Brown’s plane started leaking oil and the engine seized up. He crash-landed on a frigid, snow-covered mountainside in an area close to some White Jackets.

Circling above, Hudner saw Brown wave through the open canopy, but he did not attempt to get out of the badly damaged plane. This was distressing to Hudner for two reasons: The damaged plane was a firetrap, and the Navy had a standing order to bomb and destroy any downed aircraft to deny the technology to the enemy.

When the plane began to smoke, Hudner knew he could no longer wait for a rescue helicopter then en route. In a split second, he made the decision to crash land his own fighter in an attempt to save Brown.

Hudner, who injured his back in the crash, quickly discovered that Brown’s leg was pinned beneath the fuselage. The rescue helicopter arrived, but it was near dusk and had to leave soon; it was not navigable in the darkness.

For 45 minutes Hudner and the helicopter pilot labored with an ax to free Brown. They were unable to quell the flames, now rising from the plane, with a fire extinguisher.

The pilot believed that Brown was dead and motioned for Hudner to board the helicopter. To stay would likely mean freezing to death overnight.

Hudner’s last words to the unconscious Brown was that they would return for him. That didn’t happen.

The Navy destroyed the Corsairs with bombs several days later.

Hudner had expected a court-martial for intentionally downing his plane, but the Leyte commander, Capt. T.U. Sisson, told him, “Personally, I’ve never heard of a more wonderful act than what you pulled out there.”

Hudner received the Medal of Honor from President Harry Truman on April 13, 1951.

Hudner spent almost 30 years in the Navy, retiring in 1973. In 2012, the Navy announced it would name a destroyer after him.

Through it all, his esteem for Brown has never wavered.

“Jesse remains a marvel to me all these years later,” Hudner said. “How did he overcome the obstacles he did? How did he bear such weight on his shoulders? It’s one thing to fly a tight formation past the ship so you look good for the air group and your shipmates, but what about what Jesse did, carrying the hopes of the African-American people?

Hudner said he’s heard Brown described by some as a “one-man Tuskegee Airmen,” referring to the U.S. armed forces’ first black pilots, who flew during World War II. Hudner agrees with the description.

“Until Jesse came along, there was not one black naval aviator,” he said. “I’d go so far as to say that his legacy is larger than that. Jesse was in the vanguard of the civil rights movement. Just a few months after President Truman integrated the military, Jesse earned his wings and found himself under the microscope. You can bet a lot of people were rooting for him to fail, to prove Truman wrong.”

In 2013, at age 88, Hudner tried to make good on his promise to Brown to return to that mountainside, flying to Pyongyang in July in an attempt to mount a search for the aviator’s remains. He met with a North Korean colonel, who told Hudner that his government had agreed that a search for Brown could proceed.

Stormy weather, however, made it impossible to reach the mountain during Hudner’s 10-day visit. Since then, relations between the U.S. and North Korea have once again soured as the country’s new young leader, Kim Jong Un, has pressed forward with nuclear-weapon and missile tests.

That unfulfilled promise is one reason it’s so important to Hudner that Brown’s name live on with a new ship.

Other reasons go beyond his personal feelings.

“In the end, Jesse proved that blacks were able to take their place in the ranks as well as any whites could,” Hudner said. “That’s why he deserves a ship in his name: He helped set the bar for the future of our military.”

Navy officials absolutely agreed in the past. In 1973, shortly before he retired, Hudner dedicated the frigate USS Jesse L. Brown at the Boston Navy Yard.

But the USS Brown was decommissioned in 1994 and sold to the Egyptian navy.

Naming a new ship after Brown “would ensure that Jesse’s legacy lives on, long after we, his friends, have left this earth,” Hudner wrote in his March 4 letter to the Navy.

He continued: “[I]magine what a tremendous source of inspiration it would be to our officers, enlisted sailors, and the American people if, one day, they can see the USS Thomas J. Hudner and the USS Jesse L. Brown, sailing side by side. It would be a statement to the world, of just how far we’ve come.”

Four days later, a Navy official responded, telling Hudner he made “a very good case” and that his “recommendation will be given every consideration when names are chose for future ships.”

“He stands alone as a figure in history,” Hudner said. “He deserves a ship of his own.”