‘Winglets’ could save Air Force millions on fuel 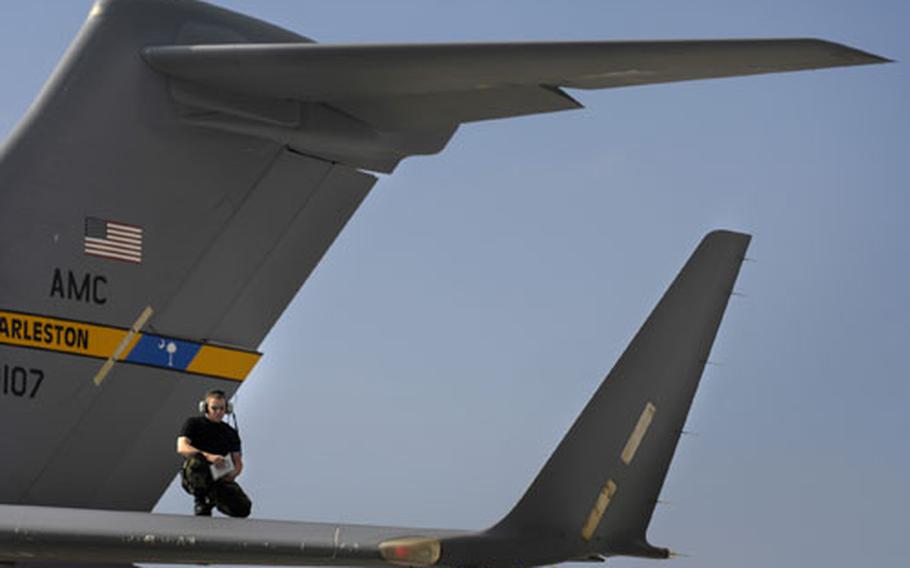 Air Force Staff Sgt. Kevin Warren, a crew chief assigned to the 723rd Air Mobility Squadron, inspects the winglets and wings on a C-17 prior to a flight Sep. 12th, 2007 at Ramstein Air Base. (Ben Bloker / S&S)

Air Force Staff Sgt. Kevin Warren, a crew chief assigned to the 723rd Air Mobility Squadron, inspects the winglets and wings on a C-17 prior to a flight Sep. 12th, 2007 at Ramstein Air Base. (Ben Bloker / S&S) 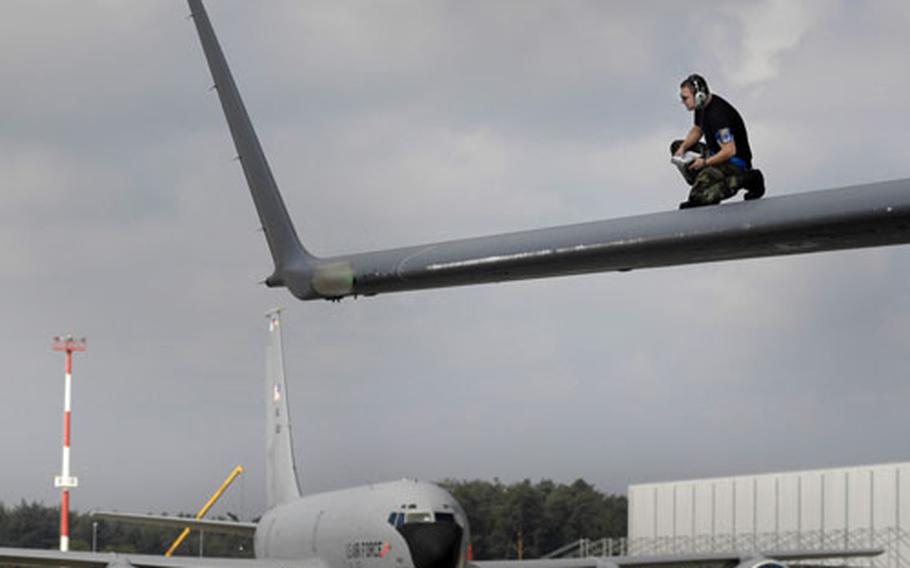 According to globalsecurity.org, winglets on the C-17 reduce drag and provide increased fuel efficiency and range. Winglet modifications may soon be introduced to other Air Force heavy aircraft. (Ben Bloker / S&S)

Airlines use them on passenger planes because they reduce drag and save fuel. Now, a study suggests they might help the Air Force.

The National Research Council found that adding winglets to most cargo aircraft could save the Air Force millions of dollars in fuel costs.

The study, released earlier this month, found that KC-135 Stratotanker and KC-10 Extender could reap the biggest savings because they are derivatives of commercial aircraft already using the winglets.

The report added that the service should consider installing them on C-5 Galaxy and modifying winglets used on the C-17 Globemaster III, but more extensive research is needed.

The Air Force is looking at various ways of reducing fuel consumption and requested the council research the issue in response to the rising price of oil. The service, the Defense Department&#8217;s largest fuel consumer, uses 58 percent of all fuel consumed by the military.

The investigating committee did not perform any testing and relied on past studies to gauge the performance of winglets on military aircraft.

For example, members used information from a NASA report that estimated a 7.5 percent fuel saving for the KC-135, and Air Force studies conducted in the 1980s.

&#8220;That data, along with more recent commercial transport airplane experience, has validated that winglets do provide a sizable reduction in fuel consumption,&#8221; retired Air Force Lt. Gen. Ken Eickmann wrote in an e-mail to Stars and Stripes. Eickmann served as the committee chair on the study and is a former commander of the Aeronautical Systems Center at Wright-Patterson Air Force Base, Ohio.

The winglets save 3 to 5 percent on fuel on commercial aircraft, according to the report.

The study found the KC-10 and KC-135 aircraft to be the best candidates because winglets have been proven to reduce drag when used on their commercial cousins, the DC-10 and the 707.

In the best-case scenario, committee members found that if all of the Air Force&#8217;s 417 KC-135s were modified, the service would see a net savings of $400 million after nine years.

If only about half of the fleet had winglets, research showed a savings of $36 million.

For the KC-10, the study found the Air Force could save as much as $221 million in as little as eight years.

Winglets save on fuel consumption because they reduce drag. When an airplane flies through the air, it creates small tornadoes called &#8220;vortexes&#8221; at the tips of the wing. But with the winglets, it creates smaller tornadoes. This results in less energy dissipated in the plane&#8217;s wake and less drag.

While the wingtips increase fuel efficiency, they&#8217;re not cheap to install.

Aviation Partners Boeing, a firm formed in 1999 that sells and installs winglets on Boeing planes, lists a base price of between $550,000 to $1.85 million per plane on its Web site. But the extensions could pay for themselves years later, the report said.

The C-17 transport plane is the only military-unique aircraft that has winglets, but that could change as the cost of fuel goes up. Every $10 increase in a barrel of oil costs the Air Force $600 million.

The Air Force might be able to save money by adding winglets to C-5 and modifying the ones on the C-17, but the committee wrote that more analysis is required to see if it would be worth it.

&#8220;Given that the C-5 is one of the largest contributors to the Air Force&#8217;s fuel consumption and that its missions are long-range, a study to quantify the potential gains and the effects of integrating winglets is warranted,&#8221; the report read.

The study results are being considered by the Air Force, but no decision has been made on whether to install winglets.

&#8220;We have no feedback yet regarding plans to move forward on the recommendations,&#8221; Eickmann said.