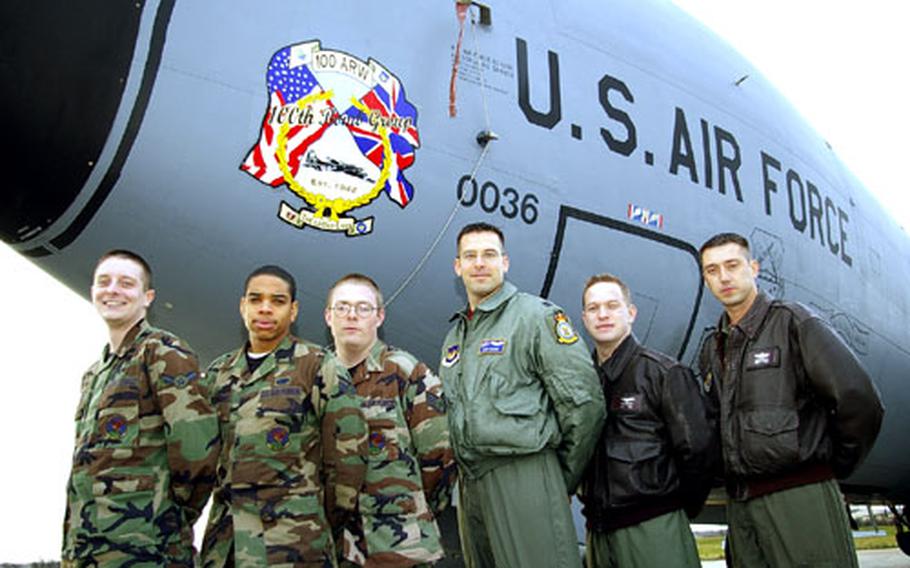 Capts. Dave Garon and Gregory Miller were relaxing after a scheduled air refueling mission on Jan. 19 when they got called up for an unusual mission.

A 52-year-old soldier serving with a contingent of Marines in the West African nation of Liberia was suffering from severe liver problems. He was in dire need of immediate medical care not available in the tiny, impoverished nation.

Garon, 31, of Marinette, Wis., and Miller, 27, of Putnam Valley, N.Y., joined Tech. Sgt. Jason Resler, 35, of Princeton, Ind., and teamed up with a group of maintenance airmen for a whirlwind mission that included stops in Germany, Spain and, finally, a Spartan airport in Monrovia.

While military planners across Europe were scrambling to put together an impromptu game plan, diplomatic officials raced to coordinate flying clearances with several African countries.

In the end, not all of the clearances could be secured quickly enough. So the team had to fly over the Atlantic Ocean to Liberia, a country of 3.1 million founded in 1822 as a refuge for emancipated American slaves.

The crew launched Jan. 20 from Mildenhall. The KC-135 Stratotanker first had to pick up a team from the 86th Aeromedical Evacuation Squadron and its roughly 2,000 pounds of gear from Ramstein Air Base, Germany.

Capt. Jason Nafts, 50, of Billings, Mont., served as the medical crew director on the mission.

Then it was on to Naval Station Rota, Spain, to wait for daybreak on Jan. 21.

&#8220;They (Liberia) lack the aviation infrastructure to operate at night, so we spent 14 hours in Spain and got out of there as quick as we could on Monday,&#8221; Garon said.

The plane landed in Monrovia &#8212; named after former U.S. President Monroe &#8212; and spent less than two hours on the ground after picking up the ill soldier. The soldier&#8217;s name was not released to Stars and Stripes.

The soldier was flown to Ramstein, shuttled to Landstuhl Regional Medical Center and ultimately traveled back to the States for further care.

None of the Mildenhall crew had heard about his current condition, but they&#8217;re sure he appreciated their efforts.