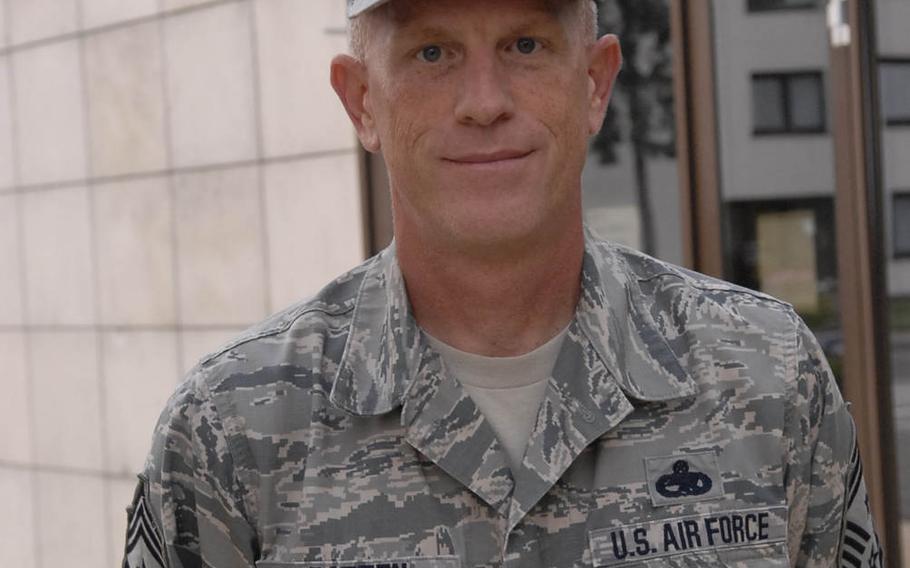 RAMSTEIN AIR BASE, Germany — Unaccompanied airmen on Ramstein and Kapaun Air Station can once again enjoy alcohol in their living quarters.

Base leaders announced in a series of town hall meetings Wednesday that they were lifting a 17-month ban on alcohol possession and consumption in and around the dormitories.

The easiest step would have been “leaving the policy in place,” said Brig. Gen. Patrick X. Mordente, 86th Airlift Wing commander, addressing about 75 airmen Wednesday night with his command chief, Chief Master Sgt. Frank H. Batten III. “We didn’t think it was the right thing, though.”

About 1,100 single or unaccompanied airmen in grades E-1 through E-3 live in Air Force dormitories in the Kaiserslautern Military Community, according to statistics from base officials.

Mordente and Batten – both of whom were not at Ramstein when the ban was implemented — said easing the ban was about trusting their airmen to do the right, responsible thing and act like professional airmen on and off duty.

“I’m a firm believer in treating airmen like airmen, treating them like professionals, holding them to a standard,” Mordente said in an interview. “Quite honestly, we looked at it; we have confidence in our airmen. Why not go ahead and lift the ban? I think they can do this, I really do.”

Older dorm residents, especially, “can’t understand why ‘I’m not allowed to have a glass of wine in my room, but I’m allowed to carry a weapon and defend the front gate or I’m allowed to fix an aircraft worth millions of dollars,’ ” Batten said, noting that about 60 percent of dorm residents are over 21. “So, it’s come down to that professional development part: ‘Hey, my leadership says they trust me, but yet they don’t trust me with this part of it.’ ”

Mordente said the decision to implement the ban was the right one at the time.

“He did what he had to do to get a situation under control, a situation where we had airmen hanging off of balconies screaming at 2 o’clock in the morning that they’ve been drunk every night in Europe and they’re drunk one more night,” Mordente said.

But most of the airmen who were living in the dormitories then are no longer at Ramstein, Mordente said.

After comparing the statistics on alcohol-related incidents before and after the ban’s implementation, Mordente said, officials couldn’t find a consistent decrease in misconduct. Incidents tended to be cyclical.

“You couldn’t look at the data and say ‘You know what, the ban was lifted on that day,’ ” he said in an interview.

Though the ban on alcohol wasn’t driven by sexual assaults in the dorms, wing leaders consulted with sexual assault prevention experts on Ramstein about the policy, given the correlation of alcohol and sexual assaults across the military, Mordente said.

A Pentagon report released in May showed that two-thirds of sexual assaults across the military in fiscal 2013 involved alcohol use by the victim, the assailant or both. “I said ‘Please show me the data and make sure there’s not something here that I’m missing,’ ” he said. They told the commander that sexual assault, from an Air Force perspective, is a much broader issue, he said.

“The ban was not about sexual assault. The ban was about holding airmen to a standard. Lifting the ban is the fact that we, the leadership team, think our airmen can maintain that standard.”

On Wednesday evening, as it was getting dark, young people with beer cans were seen walking or sitting by the dorm pavilions.

Airman 1st Class Sarah Nixon, 24, an aircraft maintainer from Birmingham, Ala., said airmen in the dorms had been excited all day about news that would be lifted.

“I’m excited only because I’m older and it’d be really nice to have my wine at night,” she said.

She’s concerned about how the younger airmen will handle the privilege. “At Ramstein, you only have to be 18 to drink, so that worries me a little,” she said.

He added: “I really appreciate that they have that trust in us, that we can really go out there and be responsible airmen.”

Others, however, have doubts.

Among them is Airman 1st Class Philip Aiken, 21, a cyberoperations helpdesk technician from Tucson, Ariz., who says he doesn’t drink alcohol.

He said after the evening town hall that he was skeptical about easing the ban, “simply because I know there are a lot of airmen in the dorms who don’t have a lot of self-control.”

“It will definitely be interesting.”

Batten said very few dorm residents have voiced support to him for keeping the ban.

Nevertheless, he said, “I think that we’re going to have airmen that disagree with the decision we made, but we’re not out of bounds with the rest of the Air Force or the rest of society. These airmen are of drinking age and they’re able to drink now. We’re just allowing them to have alcohol in their dorms.”

Ramstein was the only Air Force base in Europe to prohibit alcohol in the dormitories, according to Air Force officials. Dormitories at Joint Base Elmendorf-Richardson in Anchorage, Alaska, have been alcohol-free since 2002.

Mordente told airmen that wing leaders would have no qualms about bringing the ban back, if warranted.

“I will tell you this, as fast as the ban was lifted, it can be put back in place,” he said. “And if the leadership team believes that, for the betterment of the airmen as a whole, we need to do that, we will do it.”