Will South Korea be ready to assume wartime command? 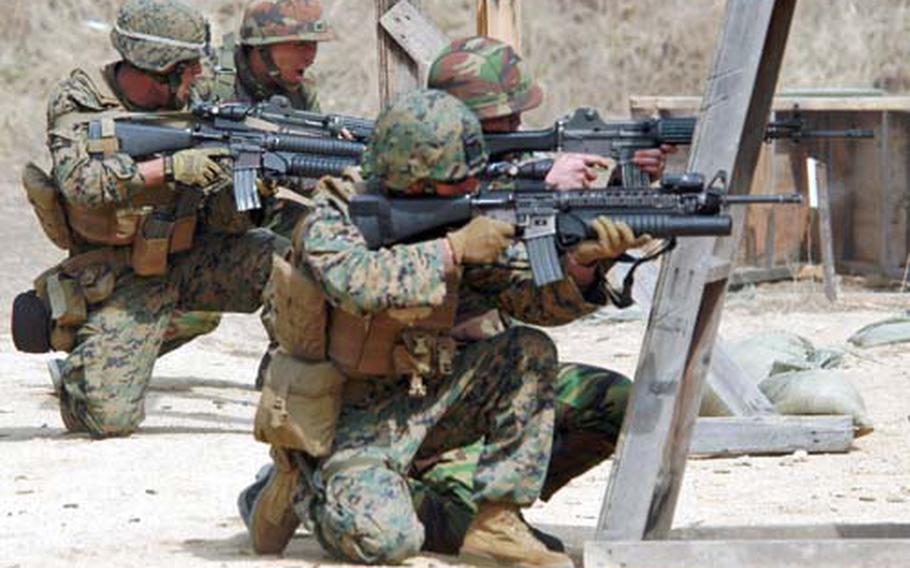 South Korean and U.S. Marines operate together during last year&#39;s annual Key Resolve/Foal Eagle exercise. The troops were from the 31st Marine Expeditionary Unit and the 2nd Republic of Korea Marine Division. They were practicing fire-and-maneuver techniques at Rodriguez Range. (Jimmy Norris / S&S)

SEOUL, South Korea &#8212; In two years, South Korea and the United States will make one of the biggest changes in the history of their decades-old military alliance &#8212; one that some experts say could put the country and the 28,500 U.S. troops stationed there at greater risk of attack by the North.

Beginning April 17, 2012, South Korean troops in any future wartime situation will no longer be under the command of a U.S. general. The two countries agreed to the change several years ago in recognition of South Korea&#8217;s status as a modern, wealthy nation with a competent military.

But a growing number of critics question whether South Korea will have the advanced military capabilities &#8212; from command-and-control systems to missile defenses &#8212; needed to lead a war against an attacking North Korea.

They contend that fundamental changes in command structure will complicate a military relationship between the U.S. and South Korea that could already be strained under battle conditions.

&#8220;That leaves ROK (Republic of Korea) and U.S. forces more vulnerable, not less vulnerable,&#8221; said Bruce Bechtol, a international relations professor at the Marine Corps Command and Staff College and author of &#8220;Red Rogue: The Persistent Challenge of North Korea.&#8221;

If a war broke out in South Korea today, the top U.S. general on the peninsula would command some 600,000 active-duty troops from both countries &#8212; a number that could swell with the arrival of U.S. troops from outside the peninsula and the activation of up to 3.5 million South Korean reservists, according to U.S. Forces Korea.

After the transfer of operational control, called OPCON, the U.S. and South Korean militaries will be run by two separate commands linked by liaison officers and coordination centers and cells. The U.S. will support the South Korean command during wartime, but its troops would remain under the control of a U.S. general.

One of the most vocal supporters of the change is U.S. Forces Korea commander Gen. Walter Sharp, the current head of the Combined Forces Command, who would lead allied forces in a war today. He said during a recent interview with Stars and Stripes that South Korea&#8217;s military, while not capable of fighting a war against North Korea on its own, is capable of leading the two countries during wartime.

&#8220;This is not the ROK military becoming responsible for the self-reliant forces to defend the Republic of Korea. That&#8217;s not what OPCON transition is,&#8221; he said. &#8220;It is the ROK military taking responsibility for the defense of their country in a combined warfighting environment with the U.S., side by side, just as we are right now.&#8221;

He said the transfer won&#8217;t affect the U.S. and South Korean unity of command because the allies will be operating from a single, agreed-upon war plan.

After the leadership transfer, South Korea will lead ground forces, with the U.S. in a supporting role.

The U.S. will lead air operations to achieve &#8220;maximum effect&#8221; from air power outside the peninsula, including U.S. assets from Guam, mainland Japan and Okinawa, according to USFK spokesman David Oten. The U.S. also will control other assets and operations, such as amphibious landings and some that can&#8217;t be disclosed for security reasons, Oten said.

Sharp said the biggest difficulty in planning for the transfer is ensuring military leaders from both countries have seamless command-and-control systems and will see the same picture unfolding minute by minute on their computer screens during a war. Both countries continue to make major progress on that, he added.

So far, both U.S. and South Korea officials say there are no plans to delay the 2012 transfer date.

However, an official with the Korea Institute for Defense Analyses, a research arm for South Korea&#8217;s Ministry of National Defense, believes South Korea will eventually ask for a delay. He said the U.S likely will agree, to avoid conflict with its ally.

The official, who spoke anonymously due to his government position, said the transfer should be delayed for at least five years so that South Korea&#8217;s military can acquire the additional capabilities it needs. Several other military experts interviewed by Stars and Stripes agreed.

The two countries decided in 2006 to work toward the transfer, against the backdrop of two struggling U.S. wars in the Middle East, a wave of anti-Americanism in South Korea and a South Korean president who downplayed the North Korean threat, experts say.

It was an emotional and political decision, not a pragmatic one, said Bechtol, who said his views are not necessarily those of the U.S. government.

Bechtol wrote in a March paper for the Center for U.S.-Korea Policy that North Korea&#8217;s conventional and nuclear abilities continue to pose a threat to the South, which lacks adequate ballistic missile defenses, airlift capability for elite units, and essential command, control and intelligence systems.

He said in a later interview that the transfer should be pushed back two to five years, the minimum amount of time he contends it will take for South Korea to increase its military capabilities to the level it needs to counter the North Korean threat.

But supporters of making the switch in 2012, such as Jang Dong-jin, a South Korean political science and foreign affairs professor at Yonsei University, argue that the transfer is a matter of sovereignty. He said delaying it &#8220;doesn&#8217;t make sense&#8221; because South Korea is an independent nation.

He doesn&#8217;t believe North Korea would be more likely to invade after the transfer, because it would still face two militaries.

South Korean lawmaker and retired three-star general Hwang Jin-ha, however, said the countries are &#8220;excessively focused on meeting a target date&#8221; and are ignoring growing signs of instability in North Korea. A key concern is how much longer the ailing North Korean dictator Kim Jong-il has to live and what will happen with is regime when he dies.

Kim was one of 20 retired South Korean generals who sent a letter to South Korean President Lee Myung-bak and President Barak Obama to reconsider dissolving the countries&#8217; joint warfighting command, saying it would weaken South Korea&#8217;s ability to defend itself against North Korea.

&#8220;North Korea has spent everything they own cultivating and producing a million troops since the founding of their country,&#8221; he said. &#8220;They cannot make money by selling their troops. The only business they can do with them is to make war.&#8221;

Stars and Stripes reporter Jeff Schogol contributed to this story.