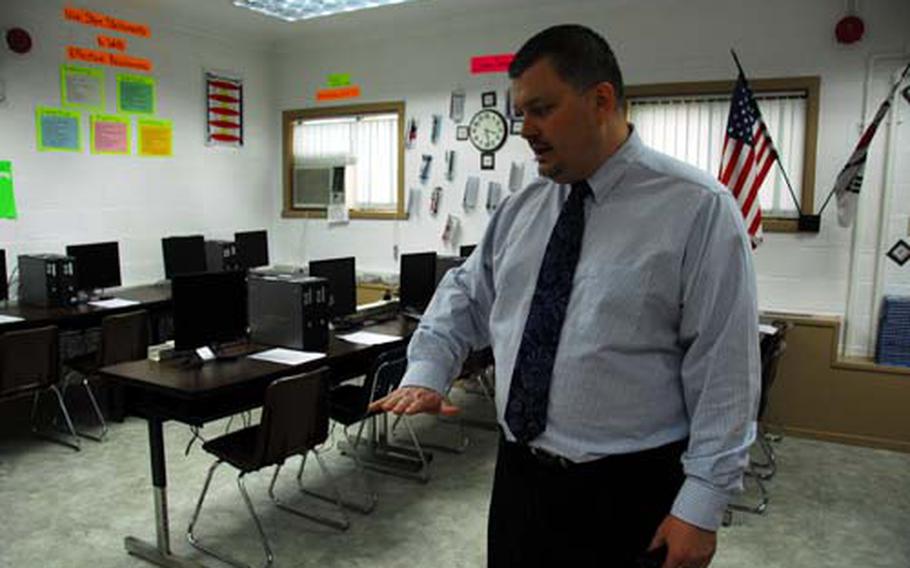 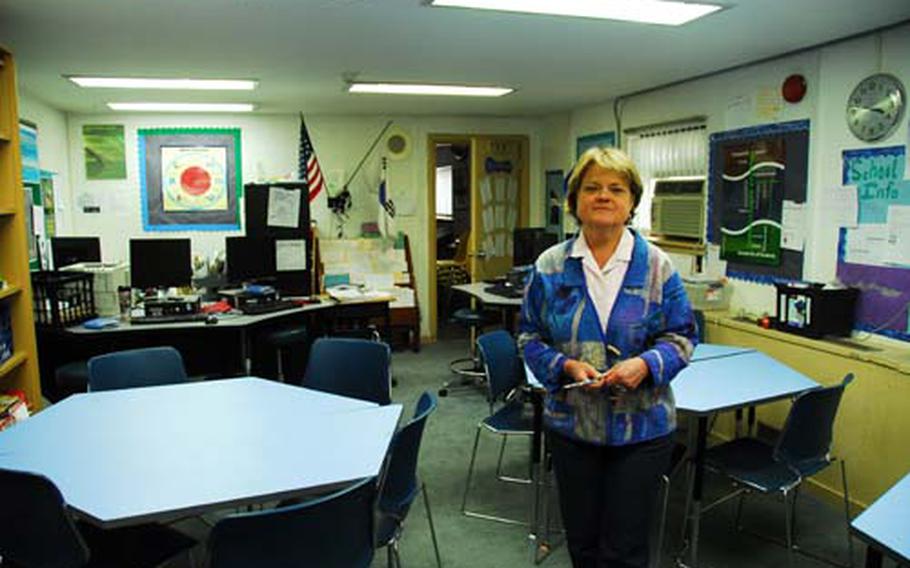 Sixth grade reading teacher Kari Kugler says her classroom is too small for her classes of as many as 18 students. (Ashley Rowland/S&S)

SEOUL - One teacher checks the glue traps in her classroom for live rats each morning before students arrive. Another works in a building that sometimes stinks of raw sewage.

And during the winter, some of the classrooms on this patchwork campus are so cold that students have to wear hats and gloves indoors.

Teachers and students have long made do with cramped classrooms and deteriorating facilities at Seoul American Middle School, thinking the school would close in 2012 along with the rest of U.S. Army Garrison-Yongsan. But now the closure of the base has been delayed, and the school continues to grow with an influx of military families moving to South Korea.

That has left an increasingly vocal group of parents and teachers angry about conditions in the aging school, which they and administrators described to Stars and Stripes. It has left cash-strapped education and military officials to figure out whether to renovate or rebuild parts of the school, all the while not knowing how long the base will stay open and how long the new structures will be required.

The middle school&#8217;s classrooms are scattered among the neighboring elementary and high schools. The school does not have its own cafeteria, gymnasium or auditorium, and many students have to cross busy 8th Army Drive to get to some classrooms.

"The school needs to be bigger," said Elise Hampton, chair of the middle school&#8217;s advisory committee. "Otherwise, they need to not send families here. I don&#8217;t know how to better say that, but if they&#8217;re going to send families to Korea, we have to be able to properly educate them."

Conditions at the school highlight a larger problem at Yongsan: how much the cash-strapped military should spend on repairs and improvements at a base that&#8217;s going to close. Yongsan and other bases in and north of Seoul were scheduled to close in 2012, with the bulk of forces relocating to U.S. Army Garrison-Humphreys.

However, construction and funding problems at Humphreys have repeatedly delayed the move, which was originally set for 2008. U.S. Forces Korea commander Gen. Walter Sharp said in March that the move would likely take place in five to six years, but he could not give an exact date.

Teachers were resigned to working in the aging classrooms until learning this spring that the move to Humphreys was being delayed yet again.

"Basically, people have been making do, trying to live with it and trying to keep a positive attitude about it," said a teacher, who spoke on condition of anonymity because she feared retribution from administrators. "It&#8217;s been &#8216;wait until we move into another building in another year,&#8217; but it keeps getting put off year after year."

According to some parents and teachers, the campus has been cobbled together over the years with existing buildings that were never meant to be classrooms. Workers found out during renovations last fall that the moldy computer room was once a communal shower, supporting their belief that some of the classrooms used to be barracks, Dinges said.

Those "huts" that may have once housed soldiers now house 13 classrooms, the library and the computer lab.

"They have pretty much outlived their lifespan," Hampton said. "We&#8217;re putting a lot of money into upkeeping them, and we would probably save money in the long run by building something that requires less maintenance."

DODDS and military officials have been holding meetings about the school&#8217;s facilities and are expected to announce their plan for the school May 11.

DODDS-Pacific spokesman Charly Hoff said last week that officials were looking at all options. He said funding constraints probably meant that the existing buildings would be renovated instead of being replaced with new construction.

Hampton, however, said that officials have decided to construct two new buildings at a cost of $2 million, though it was unclear who would pay for it or when they would be built.

Hoff said that Department of Defense Education Activity is responsible for upkeep, but the military is supposed to pay for expansion needed as a result of tour normalization or transformation.

Teachers and parents say some buildings are plagued with health hazards including rats and mold.

"It&#8217;s coming to a crisis point," said the anonymous teacher. She said some teachers have constant headaches and respiratory problems because of mold and poor air quality.

"Because of the lack of funds, maintenance hasn&#8217;t been done," she said.

Teachers, parents and administrators described a number of problems at the school, from leaky roofs to doorways that bottleneck when students enter or leave. One classroom is permeated with the smell of raw sewage, they said, and administrators said sewage erupted out of one toilets in their office earlier this year.

According to a PowerPoint presentation prepared for a school meeting, mold grows through carpets, and rats easily enter some buildings and are heard running in the ceilings. Students are supposed to receive confidential testing for special education services but are tested in a room divided by a partition, the presentation said.

Reading teacher Kari Kugler said her classroom is so tiny that noises get magnified and frustrations rise, making it harder for her to teach and difficult for students to concentrate.

"It really gets to me," she said. "They talk about how the military child deserves better than this, and look at what we&#8217;re facing here."

Compounding the problem is that the number of students at DODDS schools South Korea is increasing sharply as more troops are allowed to bring their families with them for longer deployments. The number of command-sponsored troops has more than doubled in the past two years, from 1,700 to last month&#8217;s 3,900, according to USFK. About 1,100 more families are expected to arrive by the summer of 2011.

The number of students at the middle school has increased from 543 in April 2008 to 603 as of Friday, according to DODDS.

The school&#8217;s computer lab was completely renovated in the fall after the teacher complained of respiratory problems due to mold, Hoff said.

He said he didn&#8217;t know if there had been any other illnesses related to the conditions of the schools, but he did not believe the buildings pose a health hazard.

"I can assure you that if we felt there was a health hazard, we would take very prompt action," he said.