Will Jimmy Buffett surf Okinawa? He’s thinking about it 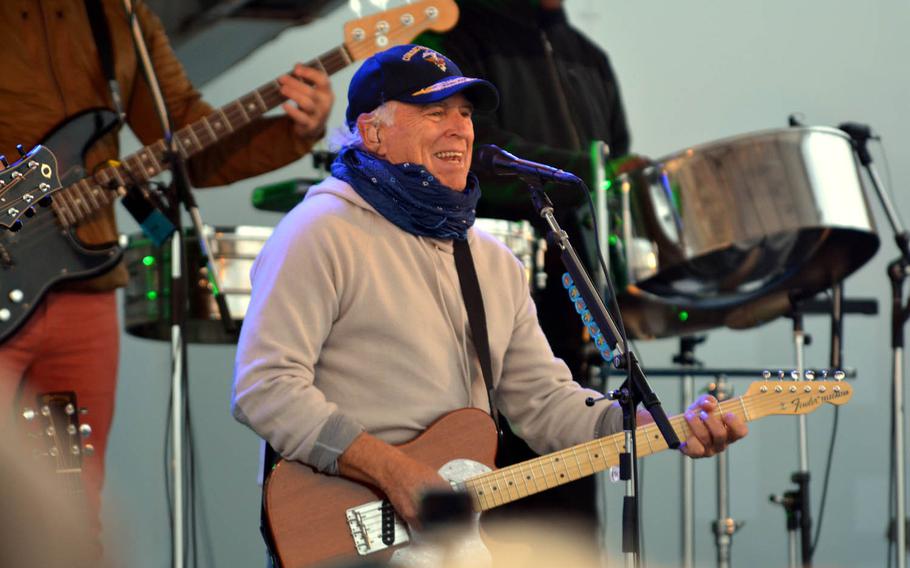 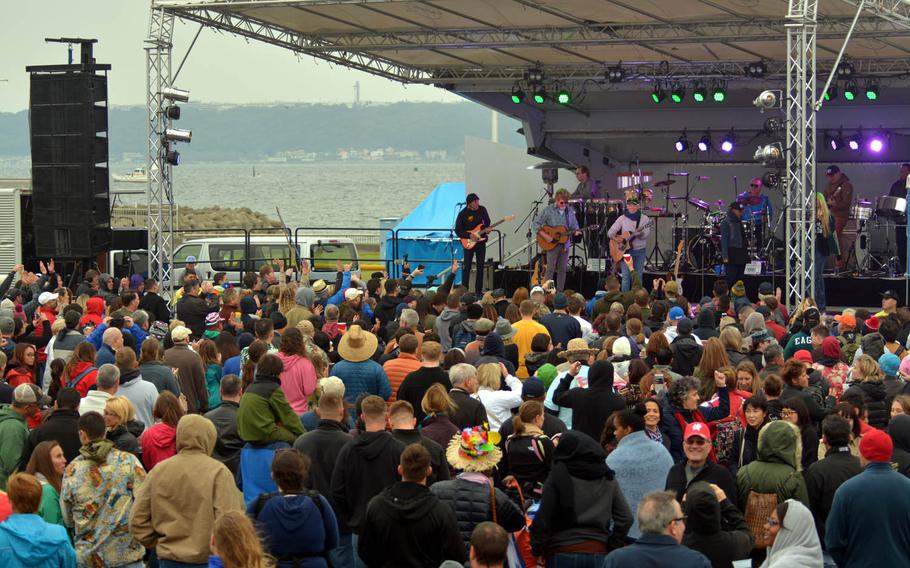 Buy Photo
The crowd fills Berkey Field on a chilly Sunday as Jimmy Buffett and the Coral Reefer Band perform for servicemembers at Yokosuka Naval Base, Japan, Oct. 30, 2016. (Erik Slavin/Stars and Stripes) 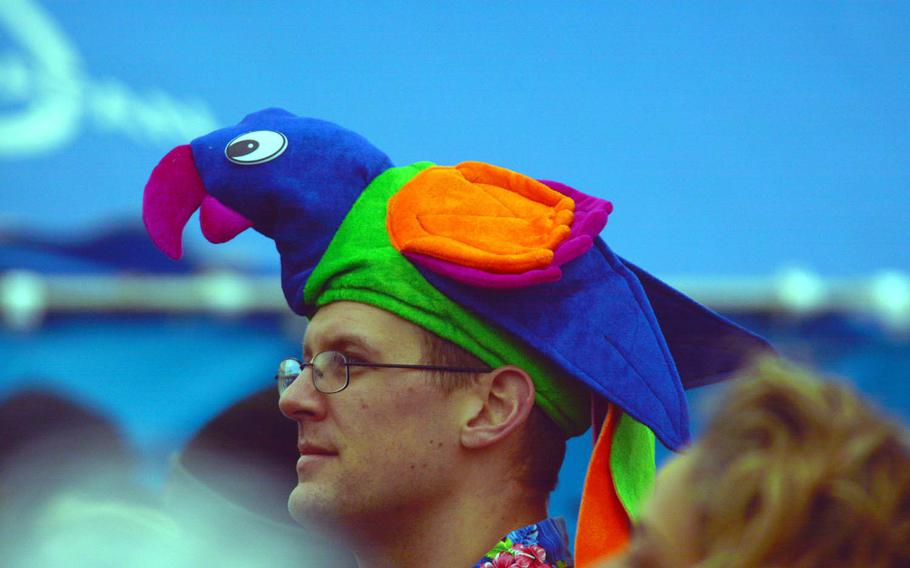 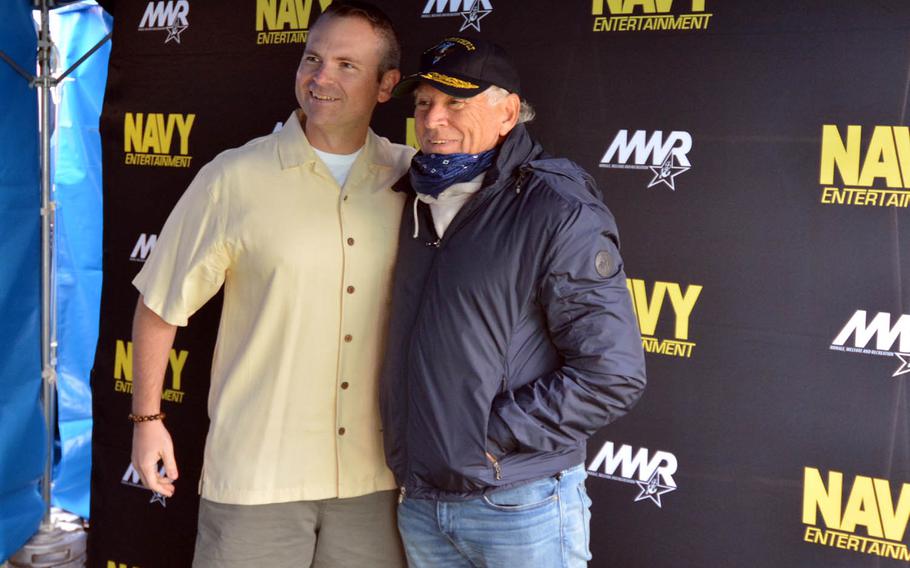 Buy Photo
Jimmy Buffett, right, poses with a fan during a backstage meet-and-greet at Yokosuka Naval Base, Japan, Sunday, Oct. 30, 2016. Buffett performed free concerts for servicemembers at Yokosuka and on Okinawa to cap his 2016 tour. (Erik Slavin/Stars and Stripes)

YOKOSUKA NAVAL BASE, Japan — If music hadn’t worked out, Jimmy Buffett might have been a retired Navy aviator by now.

“Son of a Son of a Sailor,” one of the classic songs Buffett played during a free concert for fans at Yokosuka on Sunday, is a fictional account rooted in fact. His grandfather and others in Buffett’s family served in the Navy.

Judging by the delighted Yokosuka crowd and another at a concert in Okinawa a couple of days prior, everyone is just as happy that Buffett didn’t end up in uniform.

After starting out in the 1970s and touring nearly every year, Buffett has sustained one of the longest successful careers in American music history. His shows sell out fast, thanks to his devoted legions of “Parrotheads” who follow him whenever possible.

After struggling to find his niche in Nashville — was he country? Folk? Rock? — Buffett bounced between Austin, New Orleans and Key West before effectively creating his own genre.

For generations of fans, his music embodies an aspiration to unshackle from the grind and live it up on the beach, cocktail in hand — if only for a few hours.

Buffett parlayed his touring success into a brand, launching Margaritaville restaurants and merchandise. He’s also written three books, and in 1998 had the No. 1 best-sellers in both fiction and nonfiction, joining a small group that includes Ernest Hemingway and John Steinbeck.

Buffett’s ascent came after 1977’s “Margaritaville,” a song that took less than 10 minutes to write.

It started in Austin, where he drank a margarita and thought it was pretty tasty. The rest of the lyrics came after he flew back to Florida, while waiting on a traffic accident delay on the Seven Mile Bridge, about an hour from Key West.

“That little song struck a chord that went beyond anything I could possibly imagine,” Buffett said at an interview in Paris last year. “People ask me, do you ever get sick of playing Margaritaville … are you kidding me? Look at this job I’ve got!”

Stars and Stripes talked with Buffett backstage after a meet-and-greet session with Yokosuka families.

On why he came to play the free shows:

We’ve been doing shows around the world for quite a while and it was kind of a unique situation. My friend Caroline Kennedy, when she became [United States ambassador to Japan], she’s kind of a force of nature, so she got out here and she said, “You need to come while I’m here and do this.” And I’d never been to Japan.

We have a lot of fans here, and I didn’t realize that. I thought when we came to Okinawa there’d be a couple hundred people. We had 11,000 people. We opened it up not just to the Navy, we opened it up to the town, too. I think everybody’s appreciative of that.

On his military connections:

I come from a family of sailors. My dad was a flyer in WWII. The rest of them, my grandfather and all my uncles, were in the Navy. At one point I came close to becoming a naval aviator, but then the guitar came along. So I think I kind of maneuvered it with friends that I had, and I was lucky enough to meet some very cool people. In the ‘80s I wound up trading shows for [catapult] shots basically. So I’ve been off the boat in a [F-14 Tomcat] and in an A-4 [Skyhawk].

Two of my best friends and roommates in college were naval aviators. I always stay in touch with them; they live in San Diego now. I’m still a pilot. I fly a Falcon 900LX and a [Cessna] Caravan seaplane. Landing in the East River [New York] is really fun.

This sparked my interest to come back. I have a little place in Hawaii, and I’ll be in Australia in March. I’d like to come snowboarding [in Japan] and I’d like to see the countryside. There were nice waves in Okinawa … I might go back there. It would be certainly worth coming back.

I have a travel book — it started about two to three years ago when I went to China. I’m working on that, and hopefully I’ll try to finish that up this year. And then we have the play, the “Margaritaville” musical, which has been an ongoing thing we’ve been working on for six years. It’s actually opening in La Jolla [Calif.] in April. We’ll do it there and then take it on the road, and in about a year we’ll go to Broadway with it. But it’s fun because it’s little more diverse. I should go back and do an album soon — when it comes to me I’ll go. It’s been fun for me to do some other things.

On the longevity of his career:

It’s amazing to me. The interesting thing about it is people started out that are close to my age or thereabouts, raised their kids on this music, and it took. So we’re probably four generations down the line now and it shows in the show. Our audience, the age span is probably 18 to 80. It’s amazing to me, but I’m always very appreciate of that fact. A lot of people don’t make it this far, so we’re still rolling along. It keeps you young.