Will Iraqi forces dismantle post after U.S. troops build it? 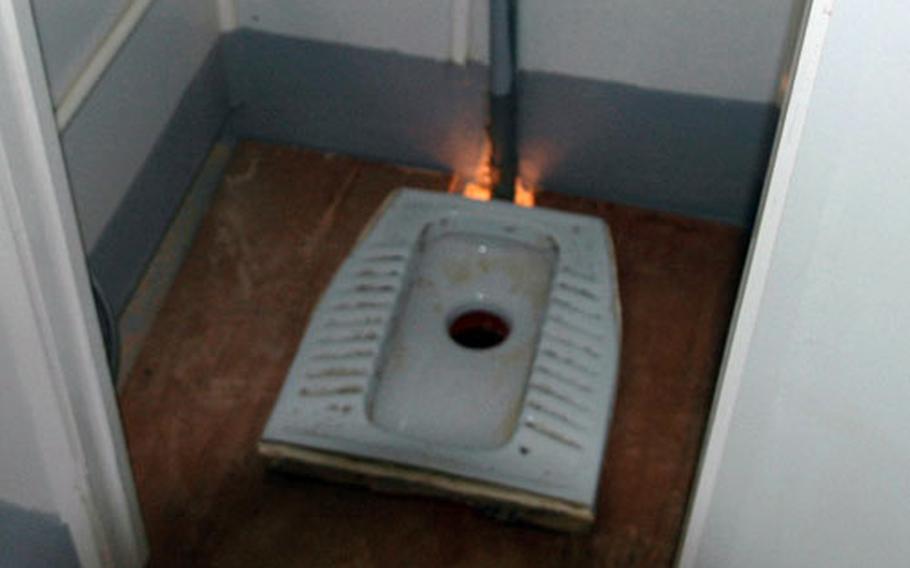 In a phenomenon that some commanders attribute to &#8220;cultural differences,&#8221; military construction crews have discovered newly constructed buildings gutted or pirated of essential items, such as nails and electrical wire, by Iraqi soldiers.

Within days of moving into the camp, Iraqi soldiers &#8220;tore up&#8221; the Western-style toilet trailers and sinks, and chose to shower with bottled water in the barracks huts that were built for sleeping. Iraqi soldiers also dismantled the cots they were provided, choosing instead to sleep on the floor. She said they also scavenged components from water pumps and the electrical systems, she said.

Anderson, whose unit falls under the command of the 30th Naval Construction Regiment, said she worries that a newly constructed Iraqi military camp at Combat Outpost South will suffer a similar fate. &#8220;My fear at COP South is that we&#8217;re overdesigning it,&#8221; Anderson said. &#8220;I worry that we&#8217;re designing it to an American standard and the Iraqis clearly don&#8217;t want that.&#8221;

Officers at COP South say they&#8217;ve taken some steps to avoid a repeat of that episode. Instead of Western-style toilets, trailer bathroom units have been outfitted with eastern squat toilets. Separate shower and toilet facilities have also been built for Sunni and Shia soldiers.

Also, human waste will be pumped into lagoons constructed outside the berm that surrounds the camp. While U.S. personnel who are constructing the camp dispose of feces by burning it in drums of diesel fuel, U.S. commanders say this cannot be done at Iraqi camps because the soldiers quickly fill the latrines and burning drums with empty water bottles.

In Anderson&#8217;s view, U.S. military designers have not fully considered Iraqi traditions and history in designing new camps. Iraqis, she said, have endured lives of privation for so long, that they are always planning ahead for difficult times. Therefore, when they come across newly constructed camps, they scavenge components and other materials for sale or use later. She said also that the Iraqi soldiers were accustomed to conditions that were far more austere than U.S. personnel endure.

Anderson said that when she visited the base in East Ramadi, she was surprised to see that Iraqi soldiers had rewired and pirated power lines from each other, stringing electrical lines pell-mell between the living huts. The Iraqi soldiers also showed little awareness for potential fire hazards, Anderson and other officers have said. Among other risks, Iraqi soldiers cooked with open flames and smoked in huts that were constructed of tinder-dry wood.

Commanders say that they are trying to educate Iraqi soldiers about such risks. Meanwhile, at COP South, soldiers and Seabees who are building the 1,000-person camp say they have heard stories about how Iraqis have treated new camps. In the case of this particular project, they said they were hoping for the best.