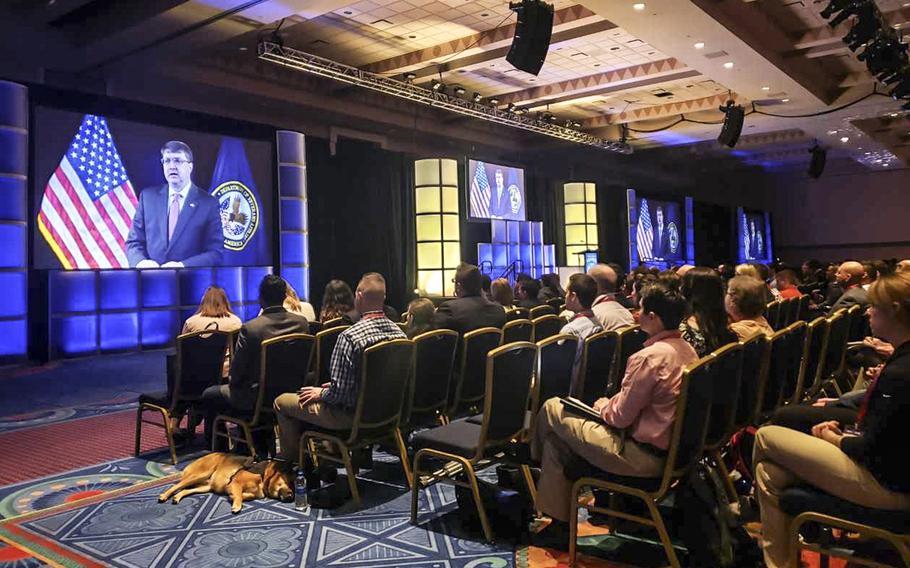 Buy Photo
Attendees at the Student Veterans of America National Convention in Orlando, Fla., watch as Secretary of Veterans Affairs Robert Wilkie addresses them by a remote feed. Wilkie was to have attended in person, but canceled earlier in the week due to the partial government shutdown, the VA said. (Nikki Wentling/Stars and Stripes)

ORLANDO, Fla. – Department of Veterans Affairs Secretary Robert Wilkie addressed a group of some 2,000 student veterans Friday to discuss a year filled with VA errors causing incorrect and delayed living stipends for thousands of GI Bill recipients that pushed some of them into financial hardship.

The veterans were gathered in Orlando, Fla., expecting to hear Wilkie in person at the Student Veterans of America National Convention. But he never made it.

Instead, the VA secretary addressed the crowd from a studio at VA headquarters in Washington, D.C., and appeared on five large screens in front of a packed Orlando convention hall. He promised student veterans were “now a permanent part of the table” at the agency.

“I wish I could say thank you for the warm welcome, but I’m here in Washington, D.C., and you are in beautiful Orlando,” Wilkie started. “So, I apologize for the exigencies of the last few weeks. I would’ve much rather been with you.”

Wilkie was scheduled to attend the convention, but canceled Tuesday, the day before the event began. VA Press Secretary Curt Cashour said the cancelation was because of the partial government shutdown, which reached its 13th day Friday.

“Secretary Wilkie will remain in Washington to ensure VA continues to provide benefits and services to all our nation’s veterans with zero interruption,” Cashour wrote in an email.

However, on Dec. 21, the day that the shutdown began, Wilkie issued a statement confirming the VA would not be impacted by the shutdown.

“Thanks to the leadership of President [Donald] Trump and Congress, VA is fully funded for fiscal year 2019, and in the event of a partial government shutdown, all VA operations will continue unimpeded,” the statement read.

Nonetheless, Wilkie was not in Orlando for the convention, which attracted more than 2,300 people Friday. The event is orchestrated by Student Veterans of America, which is made up of 1,500 chapters nationwide. The vets group is headquartered in Washington, D.C., and advocates for student veterans on Capitol Hill. It was SVA that sounded the alarm about potential payment issues in 2018 before the problems arose.

The problems started when the VA began to implement measures from the Forever GI Bill – legislation Congress passed last year to expand veterans’ education benefits. Part of the new GI Bill changed calculations for veterans’ housing allowances. The law now requires the allowances to be based on the zip code where students attend classes, rather than defaulting to the main campuses.

When the VA went to change its computer system this summer to account for the change, its IT systems failed. While it dealt with that problem, the VA was also attempting to tackle a large number of veterans’ education claims for the fall semester. What resulted was widespread delays in veterans receiving their monthly housing allowances, which they use for rent, food and other living expenses.

Some veterans reported they were threatened with eviction because of the delays.

Veterans advocates, including SVA, have cited concerns about the VA’s ability to get veterans paid for the upcoming spring 2019 semester. Wilkie insisted Friday that the agency had the resources to avoid the delays experienced in the fall.

“We’ve asked schools to submit as soon as possible to get ahead of the spring wave,” he said. “We’ve resourced to meet our timeliness and accuracy goals.”

Because of the IT problems in the fall, the VA reverted to paying students their housing allowances based on 2017 rates that didn’t account for cost-of-living increases in 2018. Veterans who were underpaid will get a retroactive payment for the amount they are owed by the end of January, Wilkie promised Friday.

The University of Kansas Military Affiliated-Student Center tweeted that meant, for its students, a check of about $24 because their basic housing allowance increased from $1,487 to $1,494 from 2017 to 2018.

The convention was scheduled to continue the rest of Friday and Saturday, with a speech expected by former VA Secretary Bob McDonald, among others. McDonald addressed the conference each of the three years that he was secretary. Last year, then-VA Secretary David Shulkin didn’t attend.