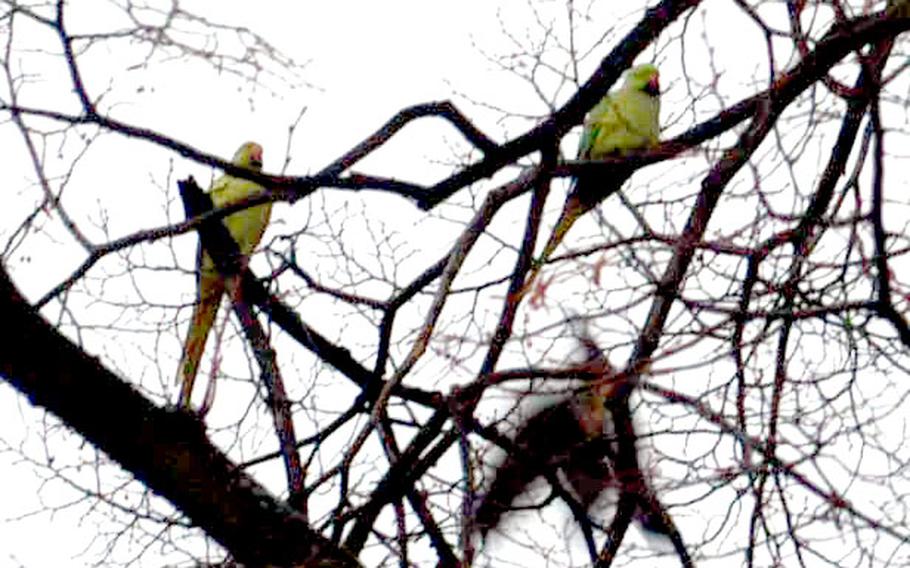 A tree on Campbell Barracks, in Heidelberg, Germany, just across from the gym, seems to be a favorite with a local flock of wild parrots. (Nancy Montgomery / S&S)

HEIDELBERG, Germany &#8212; San Juan Capistrano has its swallows. Trafalgar Square has its pigeons. Heidelberg&#8217;s Campbell Barracks has its full-bird colonels.

But the home of U.S. Army Europe and V Corps Headquarters also has something way more colorful and unexpected. Campbell Barracks has wild parrots.

A flock, in fact, can sometimes be seen in the trees near the barracks&#8217; gym, near V Corps Headquarters, or taking flight in a blur of rich, tropical green against the gray German winter sky.

"I was amazed," said Spc. Marshall Knowlton, a military police officer who guards the gates at Campbell Barracks. "You see them [for sale] in the stores."

"I first saw them in April," said Sgt. Josh Edwards, also an MP, the owner of two tame parrots and something of a parrot expert. "At the barracks by Gate 4. They like to hang out over there and play in the gutters."

The parrots&#8217; origin, how many there are, whether they&#8217;re having a good time &#8212; are all open questions. Most Americans know little about them, and some live here for years without ever seeing them.

The people at the veterinary clinic at Patrick Henry Village, for instance, drew a blank when asked if they knew anything about the parrots, as did several U.S. Army public affairs officials.

According to a USAREUR historian, the legend is that the parrots are descendants of some tame birds that escaped from Mark Twain Village some time ago.

"Someone told me they had escaped from the zoo," Edwards said. "Which is stupid. I think they migrated over here."

But the parrots, which prefer warm weather but have adapted to German winters and do not migrate, are well-known among Germans.

There are Web sites devoted to the parrots, or, in German Papageien, which say that the birds live not only in Heidelberg but also in Wiesbaden, Cologne and other towns along the Rhine.

According to Michale Braun and Stephanie Wegener, in a paper found on Google.de, parrots, which originated in India, first were seen in Germany in the wild in the 1960s and were spotted around Heidelberg in 1972.

The parrots "do not stop at the castle, the old town or the Philosopher&#8217;s Way," all big tourist spots in Heidelberg, according to the two.

The best time to observe them, according to the Web site www.papageien.org/df/, is when they&#8217;re nesting, from February through May.

The parrots have also been noted by German wildlife officials. They view them, as non-native species, more with wariness than whimsy.

"To our native birds, it could be a problem," said Dr. Ute Grimm, deputy head of the Wildlife Conservation unit of the federal Nature Conservation Agency, with offices in Bonn and Berlin. "They use, for example, the same holes in trees to breed. As they are very strong and have very strong beaks, they push out the other birds."

Grimm said there were several varieties of wild parrots in Germany, including ringnecks, Amazons and parakeets. "The parakeets are parrots with very long tails, and the Amazon has a very short tail."

They all manage cold winters by staying in urban areas where it&#8217;s warmer.

Grimm said the parrots had descended from those that had "either escaped from homes or were deliberately set free" a decade or two ago.

"A lot of parrots are as smart as a toddler," he said.