Wife's letter to deploying husband strikes a chord with others 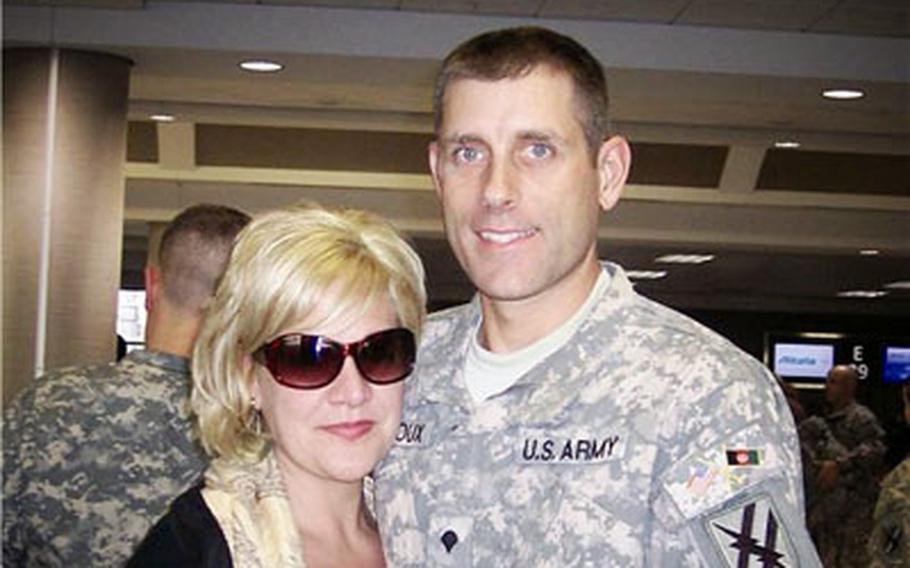 Jennifer Chaloux, newly wed and deeply in love, didn&#8217;t know what to do.

Her husband, Spc. Matthew Chaloux, a Georgia National Guardsman, was deploying to Afghanistan for a year.

Should she try not to cry? Give him a hug, get in the car and just drive off?

It was last spring, and Matthew was in his pre-deployment training at Camp Shelby, Miss. There&#8217;d be one final weekend at home, then he&#8217;d be gone.

She thought about the absence of the husband it had taken her half a lifetime to find.

So the former hairdresser sat down and wrote a letter to give him before he deployed. She wanted to put down in words all the things she was feeling.

"When you find out your husband/boyfriend is getting deployed, your world changes completely," the letter began. "The man you share your life with is leaving and there is no guarantee he will come home. Days fly by &#8230; hugs, kisses and sighs because reality is too close &#8230; days on end trying not to cry too hard so you don&#8217;t make them feel bad &#8230; laying your head on their chest trying to memorize the sound of his heartbeat, the way he holds you. &#8230;"

The letter goes on, detailing the awful talks about death benefits, the pride she feels, how she regards her husband as a hero, the worry and loneliness she&#8217;s already feeling.

It&#8217;s a three-page letter, filled with her innermost thoughts, her most tender feelings, her heartache.

Her husband read it. Then he posted it on the board at Camp Shelby.

Matthew told her that he&#8217;d wanted to share the letter; the men loved it, and then he put one of the guys on the phone, who told her how moved he&#8217;d been. What could she say?

Since then, her letter has circulated widely, among other units in Afghanistan, in Family Readiness groups, in the couple&#8217;s hometown newspaper in Vermont.

"I can&#8217;t believe the response," she said, referring to the e-mails and letters from all sorts of people.

She said she sobbed for days after her husband deployed, slept little, grew irritated at well-meaning remarks from friends and family that she thought showed they couldn&#8217;t understand her experience.

But a sort of adjustment occurred, thanks, in part, to the Internet.

The couple chat via Skype almost every day.

Matthew calls his wife an hour or so after his mission ends for the day. Once, when he couldn&#8217;t, she was a wreck.

When he did call, hours later, she wept in gratitude.

She choked up on the phone during her interview with Stars and Stripes as well.

The pair usually talk about her projects, the garden, the kitchen renovations, what happened to the dryer. What happened was, after she took off the front to remove lint, it would not go back on.

It was one of those frustrating Army-wife moments, absurd yet enraging.

So she got a hammer, and hammered the dryer front back on.

Jennifer, who&#8217;s living in Calhoun, Ga., said keeping busy has helped her stay sane through her husband&#8217;s deployment &#8212; his second, her first. She went back to school and is now taking classes to become a nurse.

She found companionship and understanding with other Army wives.

She learned how to can food so she could send her husband jars of homemade chicken soup.

This has not gone unnoticed.

"I&#8217;ve had the support of a loving wife who sacrifices her time for me, a cheering section, if you will," Matthew wrote in an e-mail to Stars and Stripes.

He&#8217;s read the letter many times, and said his wife&#8217;s love and support have made this deployment a lot easier than one to Iraq before he knew her.

Jennifer and her husband, both 38, met at a dinner party in Vermont in 2007, although it turned out that they had played in the same neighborhood for years when they were children. They became best friends, she said, during a long-distance relationship. He makes her laugh, she said, and still gives her butterflies.

Both had been married twice before, and each has two children.

"The third time is a charm for us."