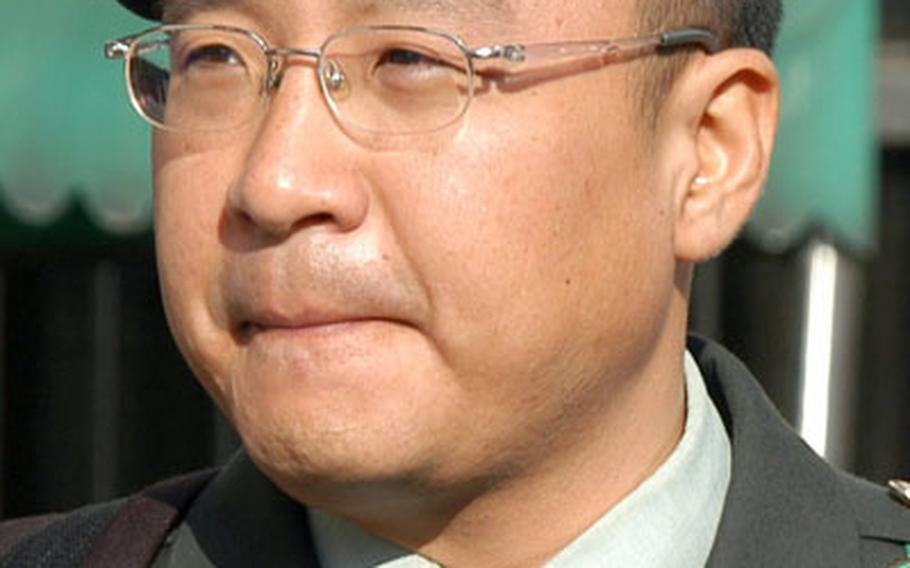 SEOUL &#8212; In two weeks, a married U.S. Army soldier should learn how long he might have to spend in a South Korean prison for having sexual relations with two different women, one he&#8217;d married and one he later asked to be his wife.

Sgt. Jin-hong Han is appealing the 10-month sentence he received in January. Han admitted he broke two South Korean laws: adultery and breaching the promise of marriage, or promising marriage in exchange for sex but then failing to marry.

His lawyer, Jung Jin-sung, has said the punishment is too harsh, especially since Han didn&#8217;t realize what he did was a crime in South Korea. But the two women the 2nd Infantry Division soldier admits defrauding &#8212; wife Na Sun-wha and girlfriend Kim Hyo-jin &#8212; say 10 months is not enough.

They say his treatment of them has dishonored them &#8212; which, in this society of high-speed technology mixed with conservative family structures, carries a substantial social scar.

In the months and years they knew Han, he lied about his income, Army rank, marital status and intentions, both women said in separate phone interviews with Stars and Stripes recently.

Na, the wife, has polio and had hoped her marriage to a U.S. Army officer would bring her a more rewarding life. Kim, the girlfriend, said she gave up her job and home in Australia to return to Seoul and marry a man who made &#8220;rosy promises.&#8221;

Now, Kim compares her dealings with Han to a movie or soap opera: &#8220;Who on Earth can guess [this] absolute nightmare happened in my life?&#8221; she said.

&#8220;Everything coming out of his mouth [are] fat lies that are endless and so destructive,&#8221; Na said through tears.

Han&#8217;s lawyer, Jung, has declined requests for an interview with his client. When asked for a response to the women&#8217;s comments, Jung said Han was not solely responsible for the &#8220;breakup of his marriage.&#8221;

Han remains in U.S. custody. He is not in confinement but has restrictions about where he can go on and off base, according to a 2nd ID spokesman.

Na Sun-wha first met Han online in August 2004, when he introduced himself as an Army captain. By February 2005 they had married and honeymooned in Las Vegas. The trip cost $6,000, which Na put on her credit cards, she said.

At about the same time, Han began another online relationship, this time with Kim Hyo-jin, lawyers for Kim and Han have said.

When Kim first met Han, she was in South Korea after a few years of studying in Great Britain and before her move to Australia. She headed to Australia but kept in touch with Han through the Internet and phone calls, she told Stripes through an interpreter.

Han had introduced himself to Kim as an Army colonel, she said. As their relationship grew, Han proposed marriage, Kim said. She moved back to Seoul and he met her at the Incheon Airport, she said.

As Han continued dating Kim, she grew suspicious as she paid for most of their outings even though he claimed to earn about $10,000 a month, she said. When she confronted him, he showed her an identification card that said he was a colonel, she said.

As Kim and Han continued to plan their wedding, his wife grew more suspicious.

After her wedding, Na said, she soon realized Han was not an officer. She also realized she was stuck with most of the couple&#8217;s monthly bills.

Kim, meanwhile, had met Han and a man she was told was his father. She later would learn the man was an actor Han hired to play the role for the official family meeting.

Kim and Han picked a wedding date, ordered the invitations and booked a wedding hall, she told Stars and Stripes. Soon after, he stopped returning her calls.

Kim tracked down Han&#8217;s real parents at an apartment in the outskirts of Seoul and learned the truth. She said she wanted to leave the experience behind her, but then his wife phoned. She&#8217;d obtained Kim&#8217;s phone number from Han&#8217;s cell phone records. The two women decided to press charges.

Na said she pressed charges to prevent another woman from being hurt. She said she&#8217;s never received an apology from Han, nor did she seek a $10 million settlement, as Han&#8217;s lawyer has said.

Sgt. Jin-hong Han is scheduled to be in Uijeongbu District Court at 2 p.m. April 21. He has been sentenced to 10 months in South Korean prison after admitting in court in January that he broke two Korean crimes, adultery and breaching the promise of marriage after promising his girlfriend he would marry her if she consented to a sexual relationship.

He has appealed the sentencing portion for the adultery charge, saying he didn&#8217;t know it was a crime in South Korea. During the appeal, he was to remain in U.S. custody, 2nd Infantry Division officials said earlier this year.