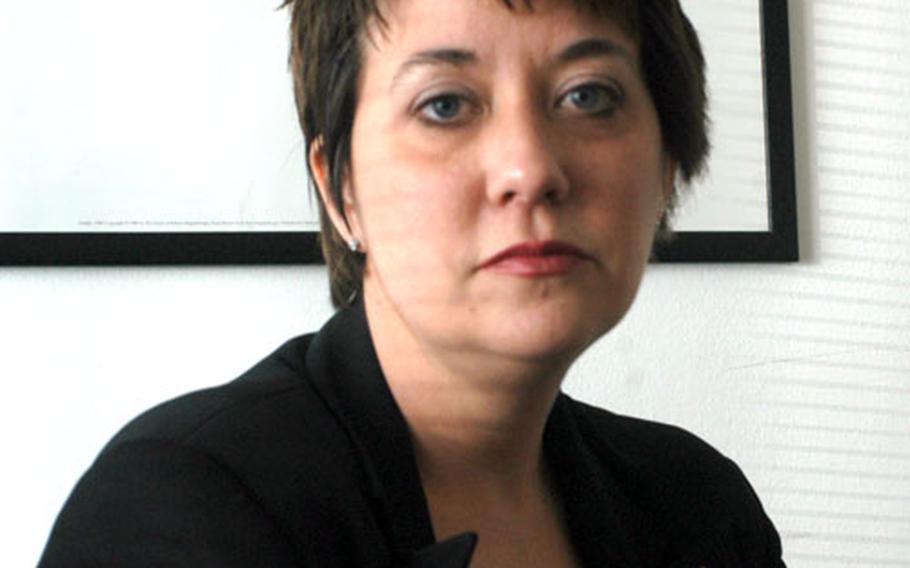 Barclay Murphy is the wife of Maj. Edward J. Murphy, who died April 6 in a helicopter crash in Afghanistan. (Russ Rizzo / S&S)

VICENZA, Italy &#8212; Minutes before the CH-47 helicopter headed to Bagram Air Base took off, Maj. Edward J. Murphy poked his head out of a window and yelled out to his buddy Capt. Rob Heath.

The helicopter carrying 18 passengers and crewmembers was leaving Orgun-E, a base in southeast Afghanistan on April 6, returning soldiers from a variety of units, one U.S. Marine, and three civilian contractors to Bagram. It crashed about 80 miles south of Kabul. Six of the 14 soldiers on board are still listed by the Pentagon as missing, but they are presumed dead.

Three of the four Vicenza-based soldiers on board were members of the 173rd Airborne Brigade&#8217;s 1st Battalion, 508th Infantry Regiment based at Camp Ederle. They routinely head out on missions while deployed.

But Murphy was a different case.

He was a signal officer for the Southern European Task Force, an office job that was supposed put him in relative safety as he kept up communication for Bagram.

That&#8217;s what his wife envisioned him doing.

&#8220;He told me he was behind a desk through two security gates,&#8221; Barclay Murphy said in an interview Wednesday with Stars and Stripes.

But war can change job descriptions.

Commanders needed a man with Murphy&#8217;s training as an Army Ranger and jump master to help with the 173rd&#8217;s missions, Army officials told Barclay Murphy.

And Murphy volunteered to fill that need, she said.

Murphy was the deputy commander for Combined/Joint 6 (communications). The noncommissioned officer in charge of the section, Master Sgt. Steve Roberts, said Murphy had a low-key management style.

Roberts said Murphy, 36 and from Charleston, S.C., was on the flight because he wanted to see how things were going at the forward locations.

As a signal officer, Murphy was able to call his wife about four times a week and he always called when he said he would and sent regular e-mails, she said.

So when he failed to call Wednesday night as the couple had planned, Barclay Murphy became worried. Later that night, a friend called to see if she had seen the news on CNN about the helicopter crash in Afghanistan.

Her stomach turned sick, she said.

As the hours ticked by the next day with no word from her husband, she became convinced that he had been killed in the crash.

She sat in her living room most of the day, waiting.

&#8220;Every car door I heard outside my door I was expecting to be the notification folks,&#8221; Murphy said.

She prepared for the visit, brushing her 7-year-old daughter Elly&#8217;s hair and making sure her 14-month-old son, Luke, had no drool on his face, she said.

Then, at 5:30 p.m., two green vans pulled in front of the house. Army officials were soon at her door with the news. Army officials and community members have provided &#8220;phenomenal&#8221; support ever since, she said.

Above all, Barclay Murphy said, she was proud of her husband&#8217;s dedication to his country.

Stars and Stripes reporter Kent Harris contributed to this report from Bagram Air Base, Afghanistan.

The Vicenza community will hold a memorial service for the four Vicenza-based soldiers killed or listed as missing in the April 6 CH-47 helicopter crash in Afghanistan. The service is set for 1 p.m. Tuesday at the base chapel.