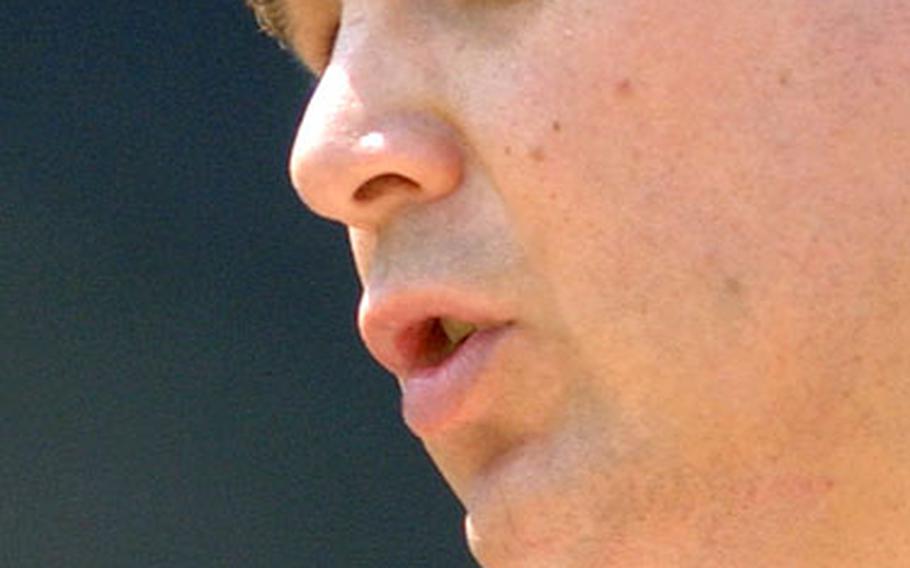 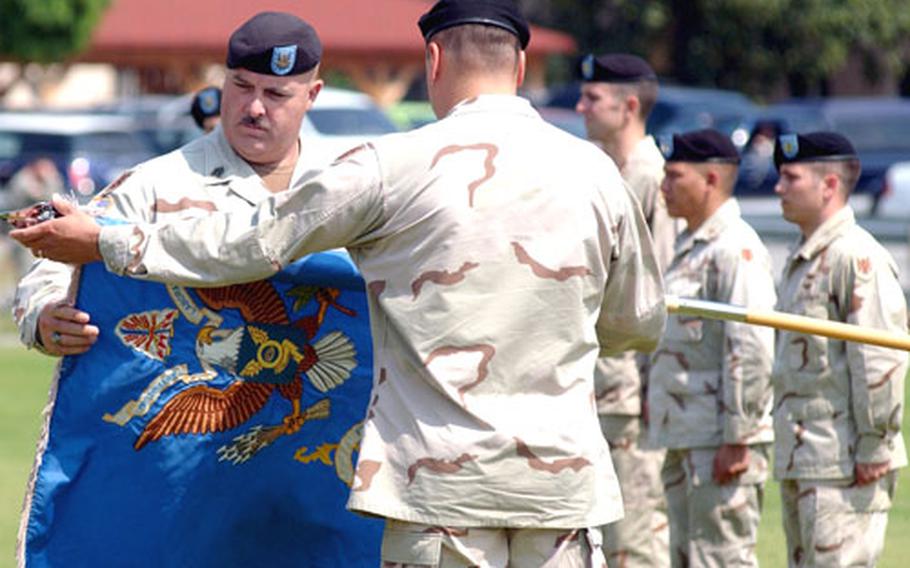 The colors of the 1st Military Intelligence Battalion are flying again in Wiesbaden, Germany, as Command Sgt. Major Michael Allen, left, and battalion commander Lt. Col. Michael Popovich uncase them at a welcome home ceremony at the airfield on Thursday. (Michael Abrams / S&S) Soldiers of the 1st Military Intelligence Battalion salute during the playing of the national anthem at the welcome home ceremony. (Michael Abrams / S&S)

WIESBADEN, Germany &#8212; Though they left for Iraq and returned home just months apart, the deployments of the 1st Military Intelligence Battalion and the 635th Movement Regulating Detachment were as different as night and day.

But the units stood together as their unrelated achievements were honored during a welcome home ceremony Thursday at Wiesbaden Army Airfield.

The 185 soldiers who deployed with military intelligence battalion spent a year deployed to Logistics Support Area Anaconda, a base that is home to about 25,000 troops, and is so large that it is divided into neighborhoods, among which are spread two post exchanges, four mess halls, a miniature golf course and a hospital, not to mention a 24-hour Burger King, a Pizza Hut and a Subway restaurant.

Most soldiers of the 16-strong 635th spent their year in Trebil on a forward operating base about the size of a soccer field in inhospitable territory near Iraq&#8217;s border with Jordan. They arrived to some of the most austere conditions U.S. troops have to endure. At first, there wasn&#8217;t even a single television on the base, and only the barest bones of a gym. &#8220;We had to struggle to get everything we got,&#8221; said Pfc. Zack Davis, 25, from Newport News, Va.

In his speech, Lt. Col. Michael L. Popovich, commander of the 1st MI, recalled his impression of Trebil, which he gleaned from images captured by his unit&#8217;s surveillance aircraft. It was one of the most remote and desolate areas of Iraq, he said.

Davis spent nine and a half months at that desolate camp, living in a 20-by 30-foot room he shared with nine other men. The whole base housed 81 troops &#8212; 70 of whom were Marines whose job it was to search vehicles coming over the border and provide overall security for the small base.

The 11 soldiers of the 635th in Trebil made sure that supplies being trucked in from Jordan &#8212; mostly water, food and fuel bound for U.S. camps across Iraq &#8212; were going where they were supposed to.

&#8220;I pretty much did the same thing my dad did when he was in Vietnam,&#8221; said Davis, a third-generation soldier. His grandfather fought in Korea.

Some lucky 635th soldiers were assigned to Anaconda, where they processed vehicles and equipment for shipment back to Kuwait or the U.S.

Fiala recalled one particular incident in which he spotted insurgents about to carry out an ambush on a U.S. convoy. The information was relayed to ground forces, and a counterambush team foiled the insurgents. &#8220;I know we saved somebody&#8217;s life,&#8221; said Fiala.