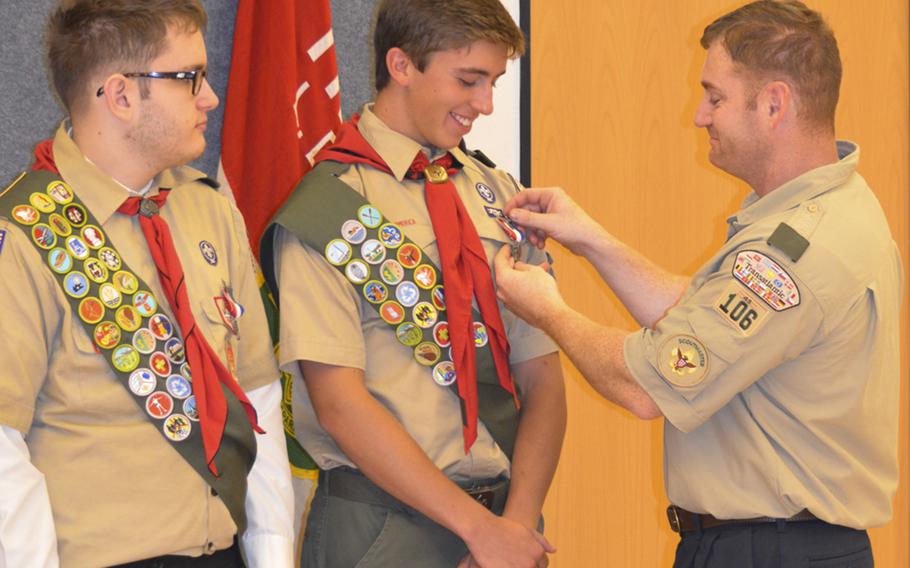 Adam Cloud and Michael Brandt had worked toward the rank since starting in Scouting a decade ago.

“It feels great, it’s just awesome to have finally gotten this award,” Cloud said. “It was a lot of time that I had to put into it, getting all the merit badges. There’s a specific plan you have to set.”

Since its creation in 1911, the rank of Eagle Scout has been attained by more than 2 million young men — less than 4 percent of all Boy Scouts, according to Boy Scouts of America. To earn the rank, Scouts must complete no fewer than 21 merit badges, demonstrate leadership within their troop, and complete a service project.

“I got a lot out of it,” Cloud said of his time working toward the rank. “I think I got more out of it than I put into it.”

Cloud has already studied a semester at Brigham Young University in Provo, Utah, and plans to spend a two-year mission in Peru before continuing his studies in Utah. Brandt plans to continue volunteering with the local Boy Scout Troop in Wiesbaden until his family moves back to the U.S. He expects then to enroll in college.