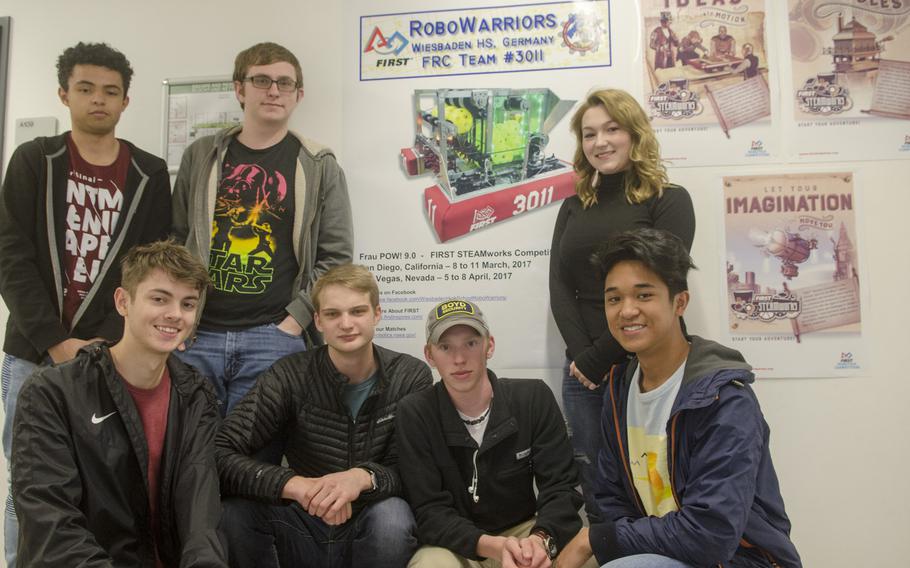 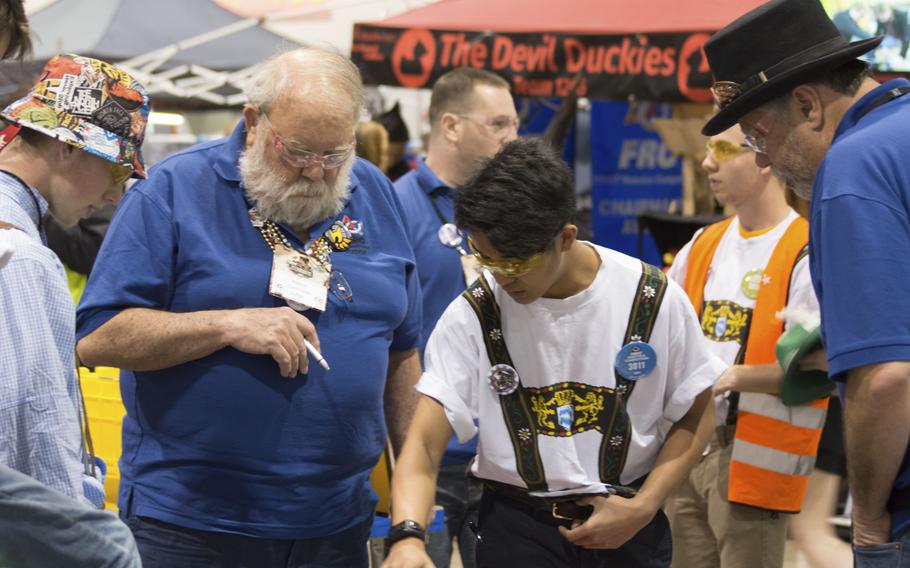 Wiesbaden RoboWarriors robotics club members James Parker Crumbly, left, and Dennis Sarsozo, third from left, explain the features of their robot, Frau POW! to judges during a competition in the U.S. this spring. The RoboWarriors were the only team from DODEA to enter the competition and finished in the top six in two events in San Diego and Las Vegas. (Courtesy photo)

WIESBADEN, Germany — For the second consecutive year, the RoboWarriors of Wiesbaden High School — the lone participating school from the Department of Defense Education Activity— finished in the Top Six of a prestigious international robotics competition in Las Vegas and San Diego.

Wiesbaden competed against nearly 50 other schools in Las Vegas April 6-8 and more than 60 others in San Diego March 9-11. This year’s theme was steampunk, a type of science fiction inspired by the steam-powered devices depicted in the writings of Jules Verne and H.G. Wells.

In each match, a group of three schools would form an “alliance” against three other schools, remotely maneuvering their robots around a 27 by 54-foot field. Teams scored points by delivering gears with their robots to their alliance’s airship in the center of the field, or use a launcher attached to their robot to shoot balls representing fuel into a boiler on the field. If a robot could do these things autonomously for the first 15 seconds of a match, and if the robot was able to use a winch to climb a rope into the airship, teams could score valuable bonus points. The Wiesbaden robot, Frau POW!, could do all of these things.

“It was an outstanding year; the kids made a stellar effort,” said club adviser Frank Pendzich, adding that the experience would help the students for the rest of their lives. “The fact that they’re solving problems in a real-world environment under so much pressure makes them so much smarter.”

Pendzich said one example of quick thinking under pressure involved the winch used by Frau POW! to climb the rope to the airship broke during a match and the team only had 15 minutes to repair it.

“They worked together to get it fixed just in time for the next match,” Pendzich said.

The competition is sponsored by the nonprofit group For Inspiration and Recognition of Science and Technology, or FIRST, and featured hundreds of schools from around the world in several divisions.

The RoboWarriors, who have about 15 active members, exceeded many of their expectations, as the team has to overcome membership turnover unique to a military-affiliated school.

“Everybody moves, it’s such a rotating cast,” said James Parker Crumbly, one of the club’s members. “There’s no constant group of people that can stay here and learn the skills and every year just take over from last year.”

Some of their competitors had the advantage of big-name backers and sponsors, though a cap of $4,000 on robot-related parts helped level the playing field. Pendzich said the RoboWarriors funded their robot through tuition to their summer science, technology, engineering and mathematics, or STEM, day camps, food concessions and the Pentagon’s STEM program, as well as grants from local organizations.

“We have such a small group and budget, and there are schools sponsored by NASA, Apple or Google and we come over, and placed so well,” club captain Dennis Sarsozo said. “That we can come over there and be competitive with those people, it’s crazy.”

Frau POW!, was equipped with an advanced “swerve” drive train which enabled it 360-degree movement at the push of a button from the drivers. It’s something the club came up with this past summer, before the competition was announced. Pendzich likens the drive train to motorized shopping cart wheels, but including an onboard computer.

“The design of the wheels was unique,” he said. “They allowed us to move anywhere without having to steer — we just push the joystick (on the remote control) in that direction and it goes there without turning.”

Graduations and station moves mean that only five or six members of the current team will be back next year. Pendzich said plans to expand the program to schools in Kaiserslautern and Ramstein will be pursued next year Students from those schools will join the RoboWarriors for a year before building their own robots the following year in their own clubs.

“We are so proud of Frank Pendzich and the Wiesbaden High School RoboWarriors,” said Dell McMullen, director of DODEA-Europe. Robotics has been a great vehicle in our schools to engage students and generate excitement in STEM subjects, and we’re very excited for what the future holds.”