Buy Photo
Stickers such as these on the door of Musikinstrumente Petroll are starting to appear in shops in downtown Wiesbaden, Germany. Local businesses are looking forward to the influx of Americans resulting from the move of U.S. Army Europe headquarters from Heidelberg to Wiesbaden next year. (Mark Patton/Stars and Stripes)

Buy Photo
Stickers such as these on the door of Musikinstrumente Petroll are starting to appear in shops in downtown Wiesbaden, Germany. Local businesses are looking forward to the influx of Americans resulting from the move of U.S. Army Europe headquarters from Heidelberg to Wiesbaden next year. (Mark Patton/Stars and Stripes) Buy Photo
Lucius D. Clay Kaserne in Wiesbaden, Germany, will soon be be home to U.S. Army Europe&#39;s headquarters. Called Wiesbaden Army Airfield before its renaming in June, the base was once also named Wiesbaden Air Base. Clay, the military governor of the U.S. occupation zone in Germany, was the driving force behind the Berlin Airlift, where the first relief flight carrying food, coal, medicine and other supplies left from Wiesbaden in 1948 in response to a Soviet blockade of West Berlin. (Michael Abrams/Stars and Stripes) 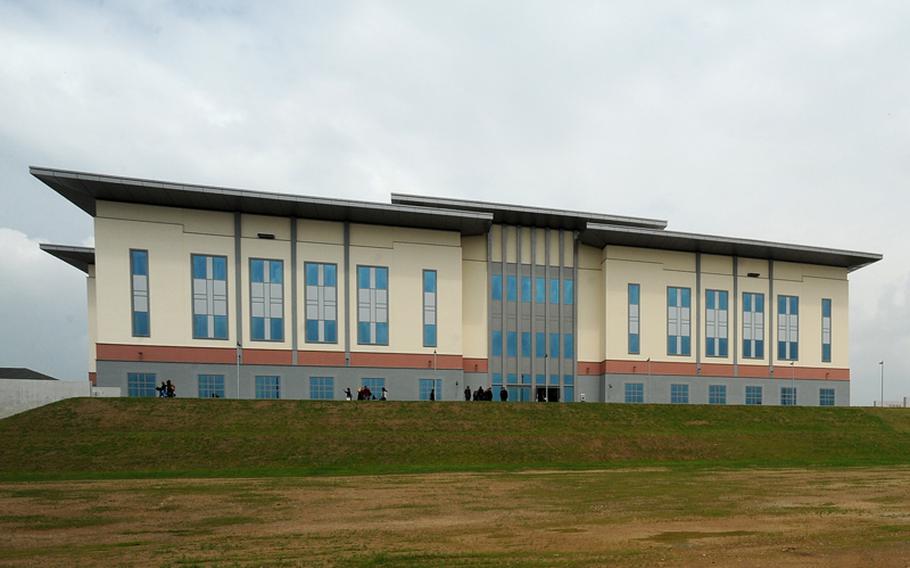 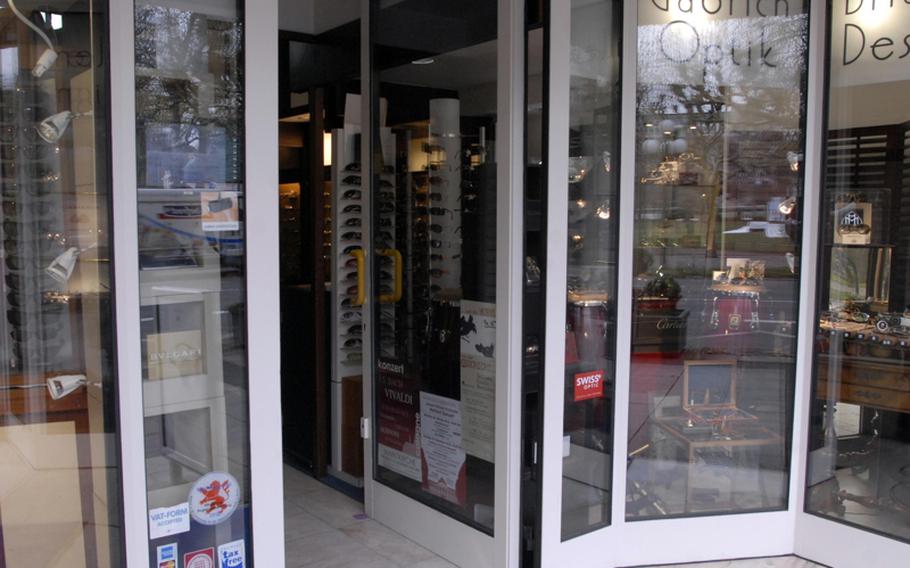 Buy Photo
Gabrich Optik in downtown Wiesbaden, Germany, is one of the first German stores to take out an advertisement in a "Welcome to Wiesbaden" guide that will be distributed to incoming troops stationed in the city in the near future. (Mark Patton/Stars and Stripes) Buy Photo
Construction on the $30.4 million Information Processing Center, one of three major operational facilities being built on Clay Kaserne, is expected to be complete in December of 2013, according to garrison officials in Wiesbaden, Germany. (Mark Patton/Stars and Stripes) 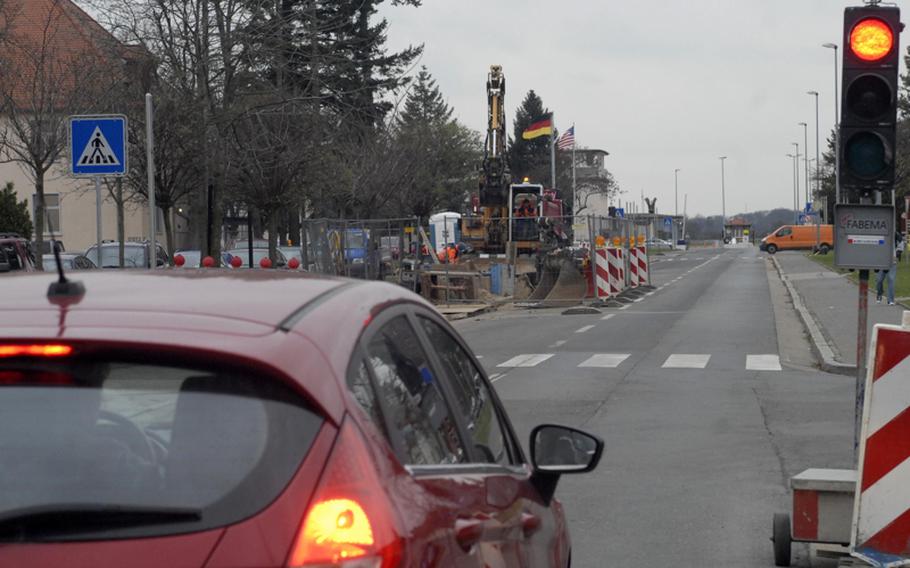 Buy Photo
A driver waits at a temporary stoplight recently installed near the main entrance to Clay Kaserne in Wiesbaden, Germany. The light, installed during a construction project, causes traffic to grind to a halt during peak hours on base. (Mark Patton/Stars and Stripes) Buy Photo
Construction on the $30.4 million Information Processing Center on Clay Kaserne in Wiesbaden, Germany, is expected to be complete in December of 2013. A parking garage will also be built to accommodate workers there. (Mark Patton/Stars and Stripes) Buy Photo
A construction crew on Clay Kaserne in Wiesbaden, Germany, works on the Information Processing Center, expected to be complete late next year. Officials say the 59,000-square feet, 200-workstation facility will improve the capability for U.S. Army Europe and 5th Signal Command to deliver timely information and consolidate operations under one roof. (Mark Patton/Stars and Stripes) 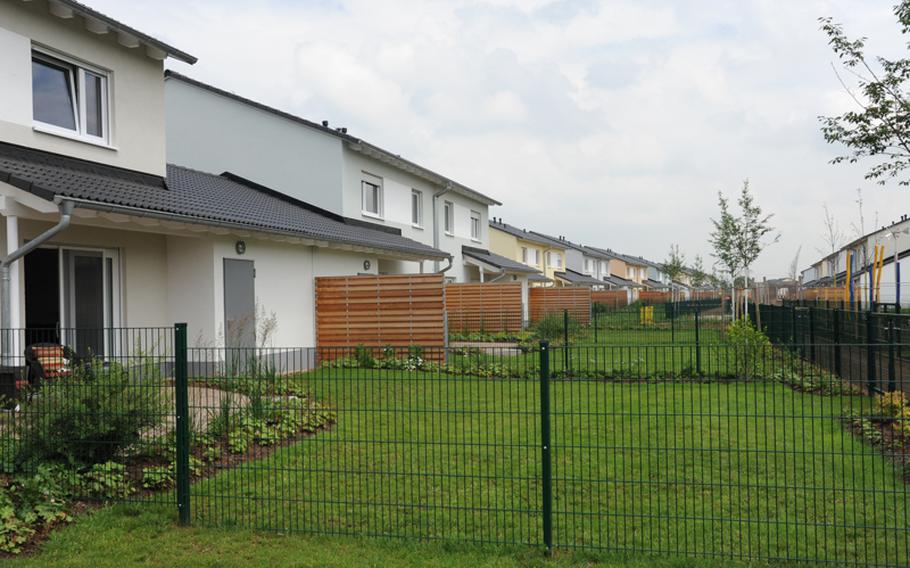 Buy Photo
Servicemembers and their families have been moving into Newman Village Housing Area in Wiesbaden, Germany, since its grand opening in June. The $133 million housing area features 326 single-family and duplex townhouse units. (Michael Abrams/Stars and Stripes)

WIESBADEN, Germany &mdash; We&rsquo;re ready. That&rsquo;s what garrison and Wiesbaden city officials are saying about the move of U.S. Army Europe headquarters from Heidelberg to their city.

The move of USAREUR headquarters along with other units is to be completed by the end of next summer. Wiesbaden&rsquo;s military community will grow as a result from its current population of 16,500 troops, U.S. civilian employees, German employees, family members and retirees to a projected 19,300 in 2015, according to garrison officials.

Several key pieces of the $500 million in upgrades to Wiesbaden military facilities, as well as standard housing and community support projects, have been completed, including the $119 million General John Shalikashvili Mission Command Center, the first new operational facility to be completed.

The &ldquo;Shali Center,&rdquo; as it&rsquo;s been dubbed, is located on Lucius D. Clay Kaserne, the hub of the Wiesbaden military community. The four-level, 285,000-square-foot building will house more than 1,300 workstations, a large Combined Operations Intelligence Center and will be the new home for a majority of USAREUR&rsquo;s incoming staff.

Roger Gerber, who heads the office managing the transition, said despite the hefty initial price tag, the consolidation will eventually pay for itself.

&ldquo;For the Army and the taxpayer, it&rsquo;s a long-range huge savings,&rdquo; Gerber said &mdash; about $112 million annually as a result of closing entities in Darmstadt, Mannheim and Heidelberg.

While military officials are optimistic about the plans laid out to accommodate the influx of troops, some servicemembers stationed in Wiesbaden are skeptical.

Some worry that measures planned to alleviate traffic and parking problems aren&rsquo;t sufficient.

Staff Sgt. Alexander Aplan, a platoon sergeant with the 66th MI Brigade, said parking is already tight on base, despite an existing 1,100 parking space garage.

Construction on a new access control point, designed to ease traffic congestion, is scheduled to begin in the spring, and there will be three parking garages on Clay Kaserne by the time the move is complete.

However, hard hats may continue to outnumber patrol caps at Wiesbaden bases even after the move from Heidelberg is complete.

Projects include the 59,000-square-foot, 200-workstation Information Processing Center, scheduled for completion next December. USAREUR spokesman Bruce Anderson says the $30.4 million center will improve the capability of USAREUR and 5th Signal Command to deliver timely information and consolidate operations under one roof. The $91 million Consolidated Intelligence Center will be the last of the three operational pieces to be built.

Gerber said discussions are under way on the future use of Mainz-Kastel. About a 15-minute drive from Clay Kaserne, it is currently the home of Army and Air Force Exchange Services&rsquo; European headquarters, as well as some DODDS-Europe offices and retail shops.

According to garrison officials, McCully Barracks, located in Wackernheim, a sleepy village about 30 minutes from the other Wiesbaden facilities, will be used for logistics and maintenance support, such as a warehouse for 5th Signal Command and storage for the housing office to keep extra furniture and appliances, according to officials.

A new $43.8 million post exchange facility is also slated for the Hainerberg community &mdash; located close to downtown Wiesbaden &mdash; where retail outlets from the existing facility as well as ones in Mainz-Kastel will merge.

In addition to the PX, Hainerberg currently houses three schools, the commissary and housing units. Construction should begin in January on the new shopping center, Gerber said.

&ldquo;It&rsquo;s a lot more convenient and allows soldiers the opportunity to optimize how they spend their lunch breaks to take care of errands that need to be done,&rdquo; said Sgt. 1st Class Vido Barina with the 2nd Military Intelligence Battalion, 66th MI Brigade. &ldquo;The traffic leading to and from Mainz-Kastel is quite frustrating and can turn a 10-minute drive into a 30-minute trip quite easily during peak hours.&rdquo;

American retailers aren&rsquo;t the only ones anxious for the new arrivals to Wiesbaden.

Wiesbaden&rsquo;s Chamber of Industry and Commerce has gathered with garrison officials to raise awareness in the business community about the transformation. Some stores in Wiesbaden have started placing stickers in their windows that say &ldquo;English spoken here&rdquo; and &ldquo;VAT-Form accepted,&rdquo; referring to the tax-free forms Americans can use on many of their purchases in Germany. Some stores offer discounts to U.S. military ID card holders.

Donald Gabrich, owner of Gabrich Optik in downtown Wiesbaden, a high-end optical shop, says he is looking forward to the influx of Americans.

&ldquo;Wiesbaden is a melting pot,&rdquo; and the majority of the population accepts Americans, Gabrich said.

&ldquo;They love Legos, so we love the Americans &hellip; They take part in our life here,&rdquo; Upano said.

Donald Meyer, chief of Wiesbaden&rsquo;s housing division, said there is plenty of space on and off base for the incoming population.

&ldquo;The [off-base] landlords are excited because they&rsquo;re going to get money,&rdquo; Meyer said, adding that Germans like to rent to Americans because it&rsquo;s a steady income for a guaranteed period of time. &ldquo;The flip side of that is, here in Wiesbaden, the city is not dependent on the Army for rentals.&rdquo;

Wiesbaden Mayor Helmut M&uuml;ller noted that fewer fighting units, which rotate in and out, will be stationed in Wiesbaden than previously, but &ldquo;a high ranking administration, many officers and generals, as well as comparable civilians&rdquo; will be.

&ldquo;Since the end of World War II, Americans belong to Wiesbaden, they were &mdash; and still are &mdash; heavily involved in the development of our city,&rdquo; M&uuml;ller wrote in an email to Stars and Stripes. &ldquo;It&rsquo;s not the economic impact that is in the spotlight, but the gain in importance; the city can thereby strengthen its role as an international city.&rdquo;