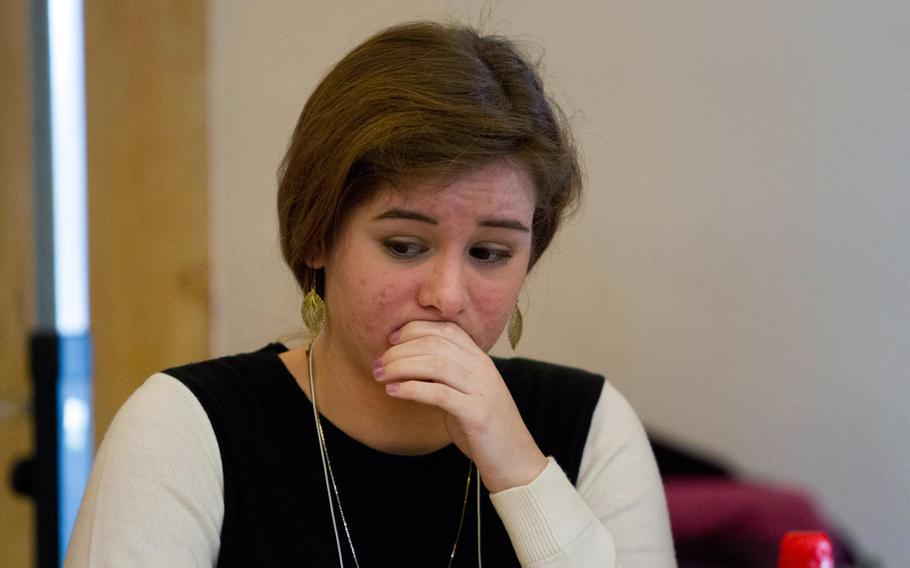 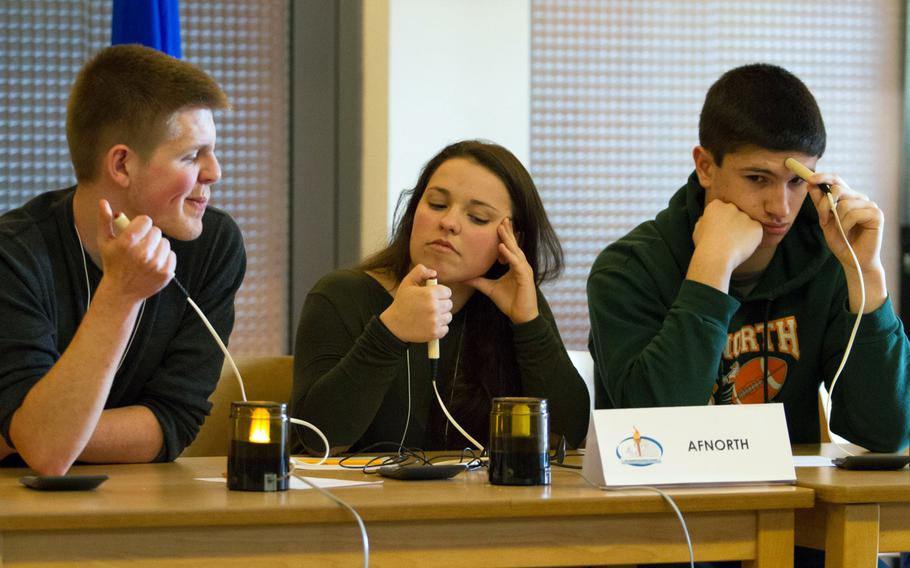 AFNORTH seniors Evan Bell and Monica Muñoz and sophomore Logan Harless wait to ring in as they listen to a question Friday, Feb. 7, 2014, during a quarterfinal "brain bowl" match against SHAPE. (Matt Millham/Stars and Stripes) 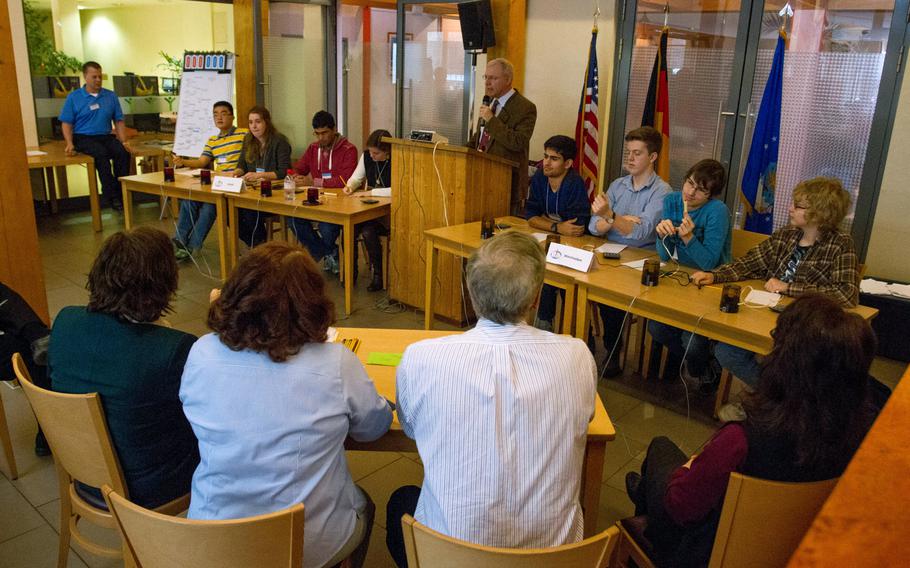 Teams from SHAPE, left, and Wiesbaden, right, wait for the start of the final match of DODDS-Europe's "brain bowl" Friday, Feb. 7, 2014. (Matt Millham/Stars and Stripes) 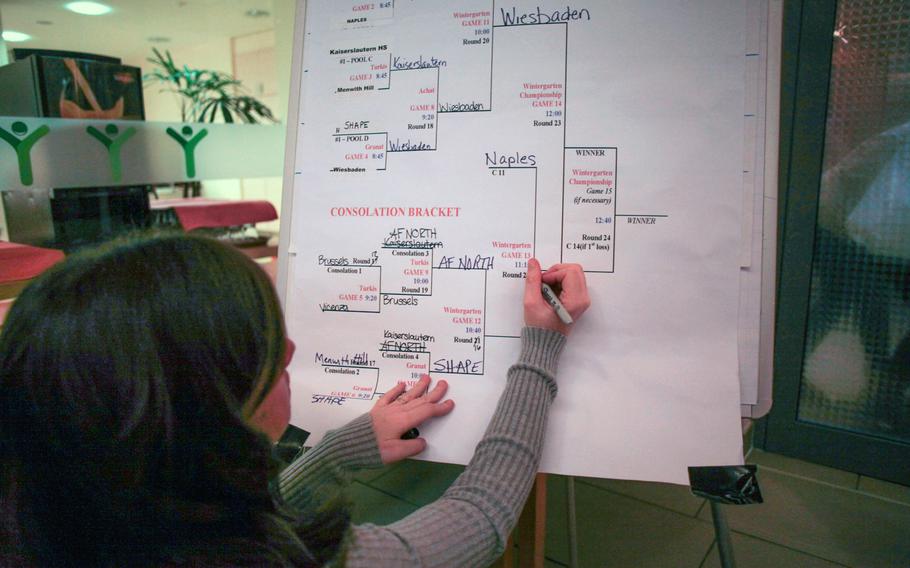 Audra Kirkpatrick, organizer of the DODDS-Europe "brain bowl," fills in a bracket Friday, Feb. 7, 2014, before the start of the two-day tournament's semifinal matchup between Naples and SHAPE. (Matt Millham/Stars and Stripes) Wiesbaden's Jared Lanterman holds his buzzer to his head in concentration late in the second half of his team's come-from-behind finals win Friday, Feb. 7, 2014, over SHAPE in the DODDS-Europe "brain bowl." Lanterman gave the final — and winning — answer of the two-day tournament. (Matt Millham/Stars and Stripes) Wiesbaden's academic team the "Brain Eaters" scramble to figure out a math problem in the final round Friday, Feb. 7, 2014, of the DODDS-Europe "brain bowl." Wiesbaden came from behind to win the final by the smallest possible margin — five points — against SHAPE. (Matt Millham/Stars and Stripes)

OBERHAMBACH, Germany — Wiesbaden High School on Friday won its second consecutive “brain bowl,” barely edging a SHAPE team that climbed to the final after being relegated to the consolation bracket.

“Going in to that, I was really, really nervous,” said SHAPE senior Brooke Lyonnais, whose team couldn’t recover after Wiesbaden grabbed the lead seconds before time expired.

The annual competition, which this year included 20 schools from DODDS-Europe and an American-heavy academy on the Continent, is part “Jeopardy,” part team competition. In a match, two schools pit their four-student teams against one another in two 10-minute halves.

The time goes quickly, but the points add up fast.

SHAPE built an early lead over Wiesbaden in the final, going up 80-15 before the first half expired.

When play resumed, Wiesbaden stormed back into contention. The comeback was partly due to SHAPE’s nerves, but mostly a result of the quick-thinking Jared Lanterman, one of two sophomores on Wiesbaden’s four-man squad.

Lanterman split most valuable player honors for the two-day All Europe Academic Games with AFNORTH senior Evan Bell, who led the team that handed Wiesbaden its only loss of the tournament.

But AFNORTH stumbled on its path to the finals, falling to SHAPE in a quarterfinal.

SHAPE came from behind in that win, repeatedly beating Bell and his teammates to the buzzer. Contestants can buzz to answer as soon as the moderator starts asking a question. Often, students buzz with just snippets of information suggesting what the question might be.

“A lot of it is just speed,” Bell said. “Because so many of the teams that I saw when I was watching some of the competitions, it wasn’t that they didn’t know the information, it was just by like a millisecond difference” between ringing in that made the difference.

Speed certainly appeared to be the deciding factor in Wiesbaden’s victory as well.

With less than 20 seconds left on the clock and trailing by five points, Lanterman looked focused as the moderator began to read what would turn out to be the last question of the tournament.

All the moderator got out was, “Which group on the periodic table is made up of alkali …”

Lanterman buzzed in with a response, “One.”

The moderator started to read another question about American literature, but before he could finish, time was called.

“I’m pretty positive that if he had finished that question about strange literary characters, I probably would have gotten that because I’m very good with books,” Lyonnais said. But she and her teammates were happy to finish second – the highest SHAPE has ever placed in the event.

Lanterman said there’s a lot of pressure on competitors to give right answers, even though teams don’t lose points for being wrong. He got a few glares from team mates and his coach for incorrect responses, he said. But he also got something else — a share of the MVP award.

“I think it means that I’ve earned the respect of the people in attendance,” Lanterman said, “and that I’ve shown that I understand a wide variety of knowledge from a lot of topics.”