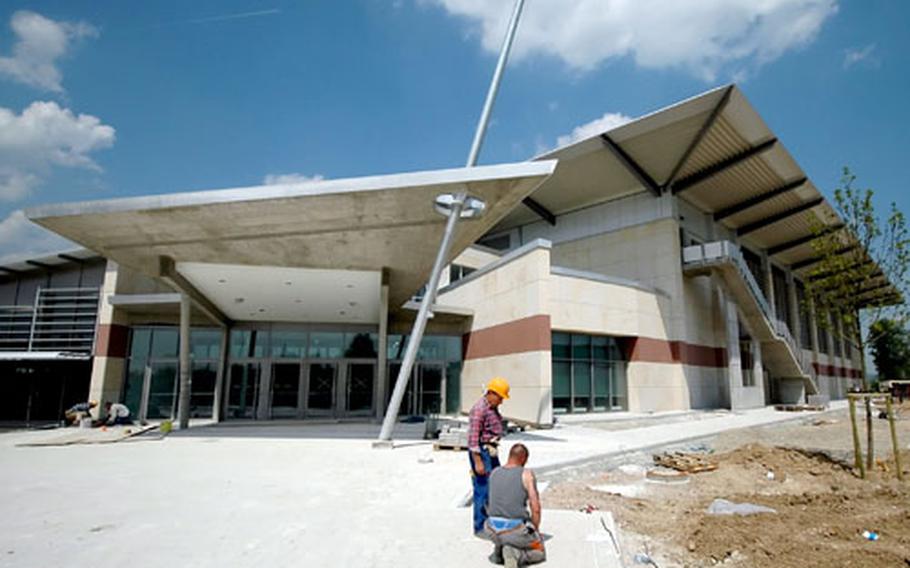 German workers look over the outside of the new fitness center at the Wiesbaden Army Airfield on Friday. (Raymond T. Conway / S&S)

Next month, the Wiesbaden military community plans to open two new facilities: a child development center and a fitness complex. Officials wanted to hold a pair of &#8220;grand openings&#8221; June 2, but thought it best to put those off for now and just open for business while working through the final checklist.

They also represent a series of new facilities that are in various stages of development in the Wiesbaden community. Wiesbaden, pegged as one of the &#8220;enduring&#8221; communities in Europe, is due to get a new hotel and, possibly, a community center at the nearby Hainerberg housing and shopping area.

The child development center and fitness complex &#8220;are definitely not the last&#8221; of the projects to come, Kardeke said.

Site work on the two facilities began in August 2004. Officials expected them to be ready a few months ago, but there were some unforeseen delays.

The fitness center&#8217;s basketball court, for example, has a hardwood floor that wasn&#8217;t acceptable, so it had to be replaced, said Jean Morrison, community recreation chief for Morale, Welfare and Recreation.

Other outstanding issues largely involve the final inspection process, matters that should be resolved in the next few weeks.

Besides the basketball venue &#8212; a multipurpose area that can hold a crowd of up to 1,800 people, or even different sporting events &#8212; there are several exercise areas, a couple of racquetball courts and an indoor running track. (A lap around the track is one-eighth of a mile.) Other amenities range from an outdoor rock climbing wall to a sauna and massage area to special ceiling lights in the gym for boxing matches.

When it opens, the child development center will be able to accommodate about 300 children, from infants to school-age kids.

The date for the &#8220;soft opening,&#8221; as Kardeke described it, is still tentative, though she said June 9 is a possibility.