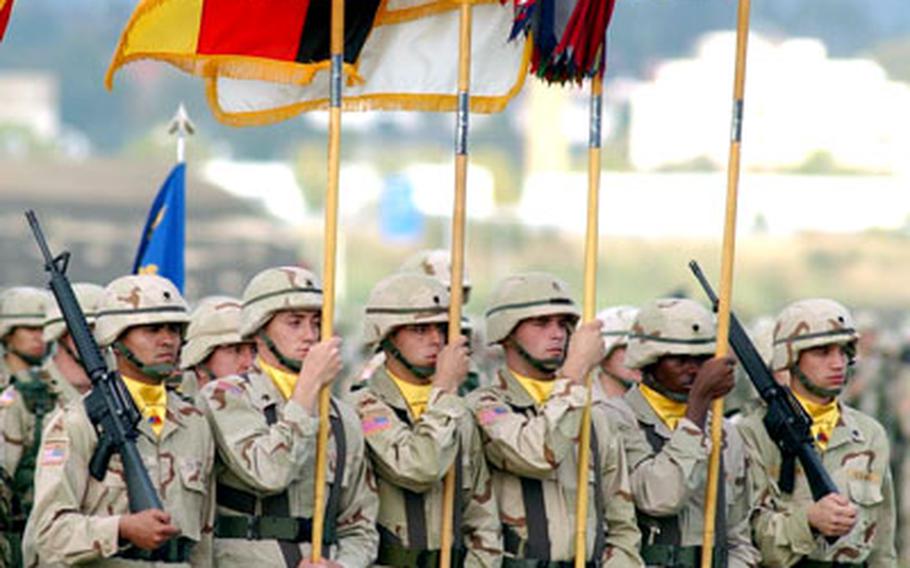 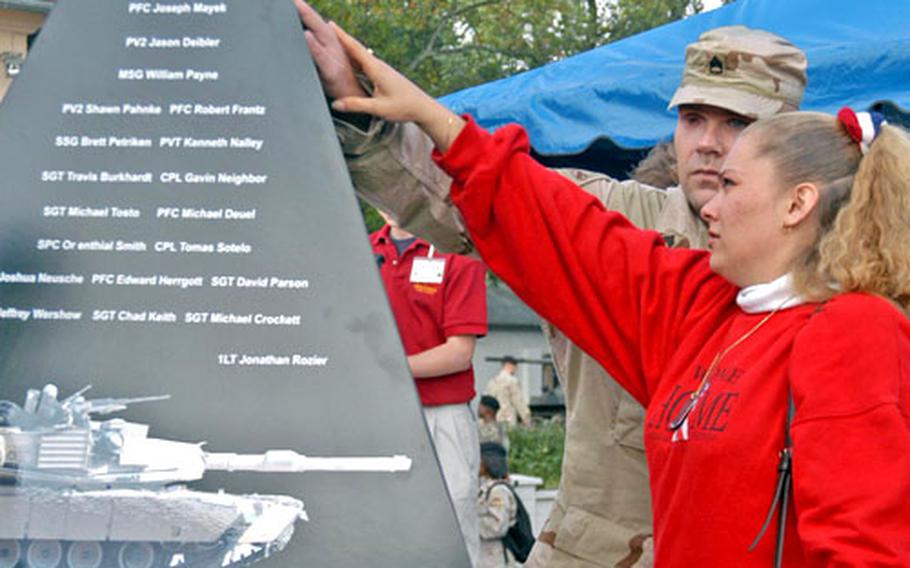 Staff Sgt. Jason Pepper, with the help of his wife, Heather, touches the 1st Armored Division memorial monument. Pepper has impaired vision after being wounded during fighting in Karbala. (Michael Abrams / S&S) 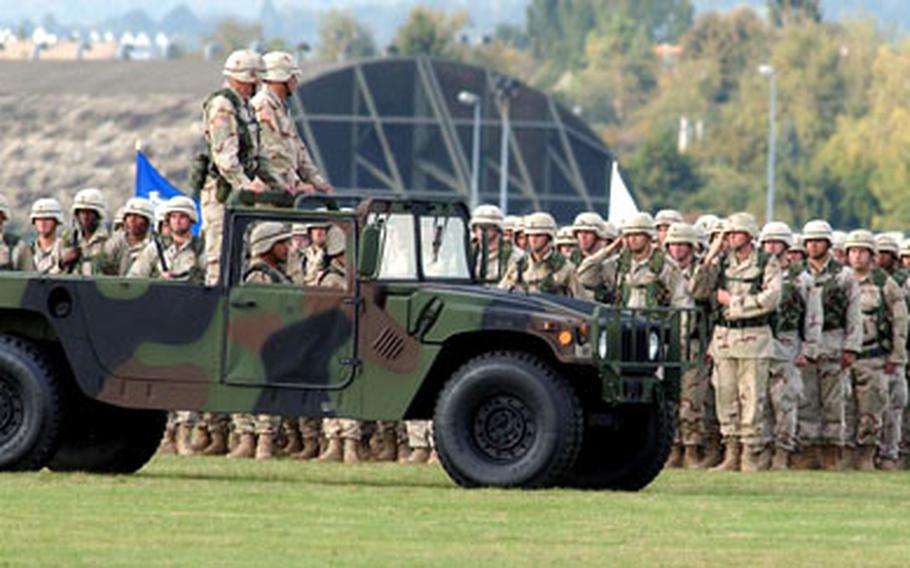 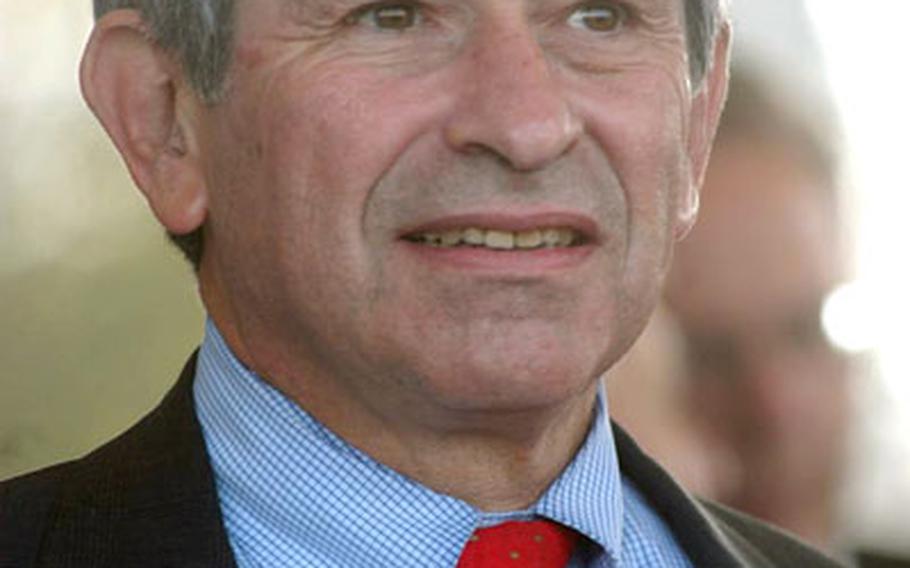 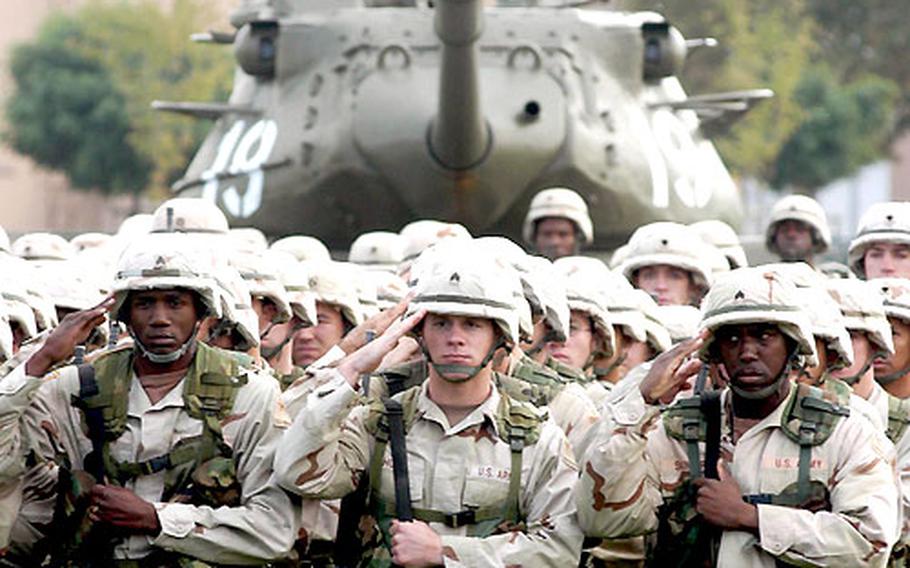 Soldiers of Old Ironsides salute during the playing of Taps at the 1st Armored Division memorial ceremony in Wiesbaden. (Michael Abrams / S&S)

WIESBADEN, Germany &#8212; For soldiers like Cpl. Aaron Johns and Sgt. Kirk Ishitani, it was a day of remembrance and reunions, a time of reflection.

The 1st Armored Division set aside Thursday to formally &#8212; and informally &#8212; celebrate its 15-month tour in Iraq, and its triumphant return. There have been other &#8220;Welcome Home&#8221; ceremonies, but those were smaller affairs.

On this day, 1st AD troops from all over central Germany joined a cadre of visiting dignitaries, from Deputy Secretary of Defense Paul Wolfowitz to U.S. Ambassador to Germany Dan Coats, to mark the occasion.

Johns and Ishitani were among the estimated 2,500 troops who assembled at the Wiesbaden Army Airfield parade ground for the dedication of a monument to the 130 soldiers of the 1st AD who died in Iraq.

It was a theme repeated at the afternoon ceremony, the formal &#8220;Welcome Home&#8221; portion that drew the largest crowd.

Listening to Wolfowitz&#8217;s remarks and others were family members, newly decorated soldiers &#8212; six of whom received the Silver Star &#8212; and several seriously injured 1st AD troops.

Wolfowitz read a letter from President Bush, in which the commander-in-chief noted how much &#8220;our country is proud of your service&#8221; in Operation Iraqi Freedom.

After the speeches and ceremonial cannon fire, the balance of the day took on a more festive flavor. There was food and drinks, and entertainment for kids and adults.

The largest draw of the day was expected to be the evening concert headlined by the Country Western band Sawyer Brown.

Not far away stood 1st Lt. Will Dossantos, chatting with three captains: Joshua Trigo, Christopher Lane and Seneca Pena-Collazo. All are with the 1st Battalion, 501st Aviation Regiment in Hanau.

It took a few minutes, but Dossantos figured out it was Pena-Collazo, an Apache helicopter pilot, who helped saved his skin one morning last November.

Dossantos was attached to the 307th Military Police Company of Pennsylvania National Guard when it came under fire while checking a supply route for explosives. Unbeknownst to the attackers, Pena-Collazo and another Apache pilot were nearby, and responded with such speed and force that Dossantos couldn&#8217;t help but still marvel at their timely appearance.

&#8220;This stuff stays etched in your brain,&#8221; Dossantos said, recalling that event and others.

That attack came a few days after the MP unit lost one of its soldiers, Sgt. Nicholas Tomko.

Tomko&#8217;s name was one of 130 names that will go on a permanent memorial that is currently being built. The monument unveiled Thursday is a replica of the granite monument that will replace it later this year.

&#8220;And we really shouldn&#8217;t mourn them because their lives weren&#8217;t taken; they were given. We should celebrate their lives, remember their families, and recommit ourselves to the hard work remaining to ensure we live up to their example.&#8221;