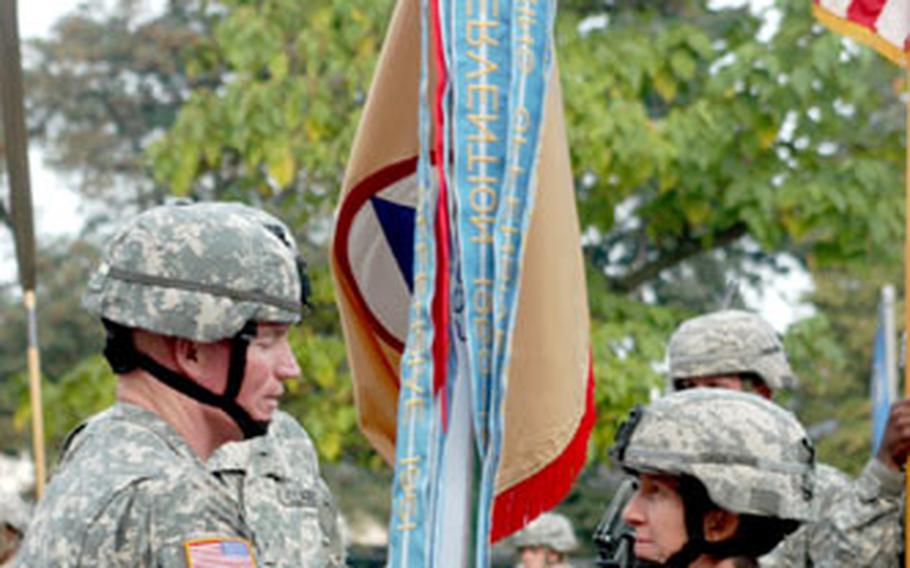 Army Brig. Gen. Becky Halstead, commander of the 3rd Corps Support Command, made light of her height during her change of command ceremony Thursday in Wiesbaden, Germany. The 5-foot, 3-inch Halstead quipped about the need for a boost at the podium while relinquishing command to Brig. Gen. Michael J. Lally, 6-foot-4. Halstead (Kevin Dougherty / S&S)

It was late Thursday morning and Army Brig. Gen. Scott G. West, head of the 21st Theater Support Command, had just ceded the podium to Brig. Gen. Becky Halstead. With her heels off the floor, the leader of the 3rd Corps Support Command leaned into the mike and made an admission.

Once properly elevated for the occasion, she picked up where she left off.

The crowd of several hundred ate it up, laughing and applauding at once.

For the record, Halstead is 5-feet 3 inches tall, while Lally checks in at 6 foot 4 inches. West got into the spirit, too.

Ten days after she returned with her unit from a yearlong deployment to Iraq, Halstead relinquished command of 3rd COSCOM. From Wiesbaden, where the command is based, Halstead is bound for Aberdeen Proving Ground in Maryland, where she will serve as commandant of the U.S. Army Ordnance Center and Schools.

Since the start of Operation Iraqi Freedom, the 3rd COSCOM has served two full, one-year tours downrange. During her remarks, Halstead spoke of the &#8220;long war on terror&#8221; the nation faces and noted that her command dedicated its last deployment to Staff Sgt. Keith M. Maupin. The Army reservist from Batavia, Ohio, is a supply guy who was captured in Iraq on April 9, 2004, by insurgents. He is the only U.S. soldier currently listed as captured.

West paid tribute to Halstead, who, as of six months ago, was one of 14 female generals in the Army.

Lally seemed to enjoy the moment, and the levity as well. He called it &#8220;a great honor and privilege to lead the 3rd Corps Support Command.&#8221;

Perhaps the biggest challenge facing Lally will be overseeing the changes in store for 3rd COSCOM, which is scheduled to come under the 21st TSC in the near future, perhaps as early as next year.