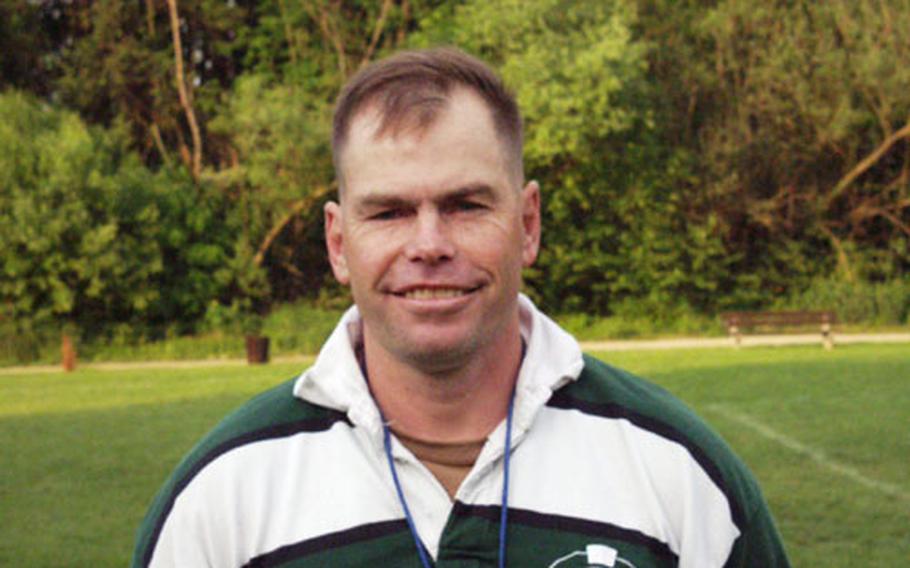 And because of his enthusiasm for sports, he&#8217;s seen even more of it than most soldiers.

&#8220;It&#8217;s worked out great,&#8221; Budzisz, a staff sergeant, said Tuesday evening as he put his team of 8- and 9-year-old soccer players through a scrimmage at Patrick Henry Village. &#8220;The good thing about the military is that there are so many opportunities for sports in your off-duty time.&#8221;

Just two weeks back from coaching the U.S. Forces-Europe team at the USA Rugby military club championships in the States for the second time, Budzisz, a former fly-half, has been picked to manage the U.S. Combined Services Team&#8217;s summer rugby tour of Europe in July.

In addition to his rugby duties, Budzisz, a single father of an 8-year-old, coaches youth fall and spring soccer and basketball, conducts rugby clinics at Heidelberg High School, helps out with the local German rugby club HRK, and officiates in six sports at youth and adult levels.

Budzisz hastened to add that support from his unit was crucial to continuing his sports-filled existence.

Commanders like Troller, Budzisz went on, have an incentive other than mere kindness to allow their soldiers to volunteer their time.

For an event such as the Combined Services Team&#8217;s tour, the support structure reaches the military&#8217;s top levels, Budzisz said.

Missed duty time usually requires the participants to use leave or obtain permissive TDY. Budzisz said that his busy schedule requires other adjustments.

After his experiences at the rarefied levels of top-level rugby, youth soccer might seem a comedown, but Budzisz doesn&#8217;t see things that way.

&#8220;I like dealing with kids better than with the big guys,&#8221; he said. &#8220;You have to coach kids differently than you do adults. Competition is competition, but we try to teach the fundamentals so that they can excel at the team game and have fun. If you keep it fun, they&#8217;ll keep playing.&#8221;

Despite the emphasis on fun, Budzisz gives youth soccer all he has.

Budzisz, who took up rugby as a club sport at Loyola Marymount University in Los Angeles, ended his playing days last year when his European side won the 2003 military club championship &#8212; the first time a Europe-based team had done so.

As manager of the Combined Services Team, he&#8217;ll be chasing down problems of various types.

His duties include coordinating logistics and travel; arranging for competitions and training facilities; working as liaison with the U.S. Department of State, local commanders and USA Rugby, the sport&#8217;s national governing body; lining up fund-raising, physiotherapist coverage and meals; and meeting with foreign military and civilian dignitaries, Kevin Sinibaldi, director of teams for the U.S. Combined Services Committee, wrote in a letter to Budzisz unit.