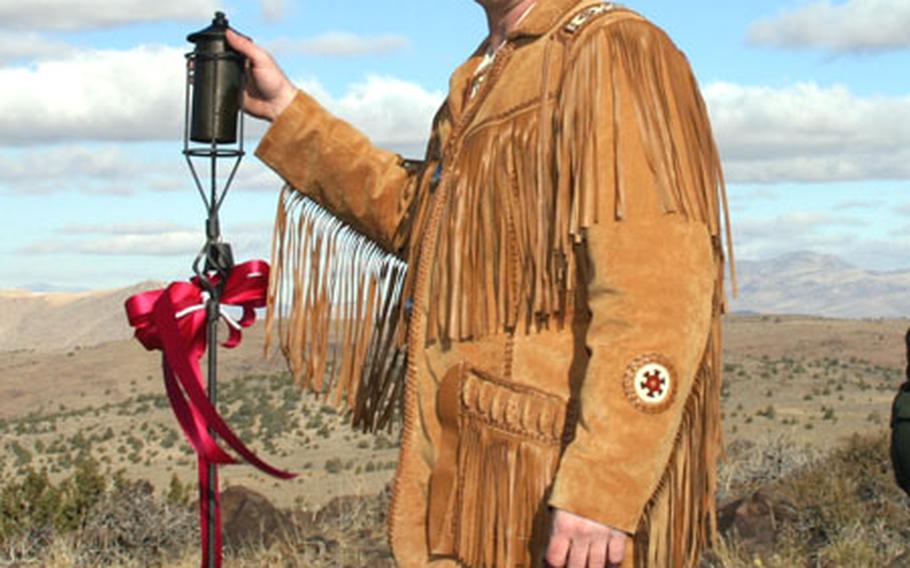 Sgt. Patrick Stewart, a 34-year-old Nevada National Guardsman killed in Afghanistan in September, is shown here during a 2003 Wiccan handfasting ceremony in Reno, Nev. His family wants a Wiccan pentacle put on his memorial plaque, but the Department of Veterans Affairs has not yet approved the symbol for use in VA cemeteries. (Courtesy of Roberta Stewart)

WASHINGTON &#8212; Roberta Stewart said her husband was known by his National Guard unit as a practicing Wiccan, someone who was proud of his faith and willing to share it with others.

When Sgt. Patrick Stewart was killed in a helicopter attack in Afghanistan, military personnel at his funeral helped mark off a memorial circle in red, white and blue tape. Friends from his Nevada unit spoke about how important both his service and his faith were in his life.

So when Stewart found out the family couldn&#8217;t put a Wiccan pentacle on her husband&#8217;s military gravestone, she was devastated.

More than five months after his death, Stewart&#8217;s spot on the Northern Nevada Veterans Memorial Wall in Fernley remains blank as officials from the Department of Veterans Affairs review the request.

The National Cemetery Administration has 38 permitted religious symbols for headstones and plaques but none for pagans or Wiccans. Officials said while they are currently processing requests from two denominations for the Wiccan pentacle, or five-pointed star in a circle, so far no decision has been made.

That has irked some Wiccan groups, who say the department has been dragging its feet for years on recognizing their religion.

&#8220;We submitted an application in 1997, and it can&#8217;t possibly take eight years to review an application,&#8221; said the Rev. Pete Davis, head of the Aquarian Tabernacle Church in Washington state.

Lindee Lenox, director of National Cemetery Administration&#8217;s Memorial Programs Service, said the delay hasn&#8217;t been a result of discrimination but instead was due to some outdated rules.

Until last fall, officials required applicants for new headstone markers to provide a letter from &#8220;the recognized central head or primary contact person&#8221; of a given faith to certify that the symbol represented the faith. Unlike most Christian and other faiths, Wiccans do not have a central governing structure, so Lenox said that provision scuttled those applications.

Now the administration instead requires historic information about the religion and other documentation supporting the use of a specific faith symbol.

Lenox said the Wiccan application is in its final stages, but could not provide a timetable for when the symbol might be approved.

Between the two congregations at least five deceased Wiccan veterans are waiting for a decision, and in each case the family has opted to leave blank name markers rather than have the department retrofit the grave sites later.

&#8220;I find it sad that men like Patrick Stewart were killed standing up for freedoms like the First Amendment, and yet he still does not have the emblem of his belief on his plaque,&#8221; she said.

Meanwhile, Stewart&#8217;s widow is still hoping a decision might come before the end of the month, when her husband&#8217;s unit is scheduled to return from its tour in Iraq.

According to Defense Department statistics as of May 2005, more than 1,800 active-duty servicemembers identified themselves as Wiccans.

Fox and Davis said that number is likely higher, because many military members are still reluctant to share their faith out of fear of discrimination.